Mercedes: We haven’t progressed with the car as we hoped 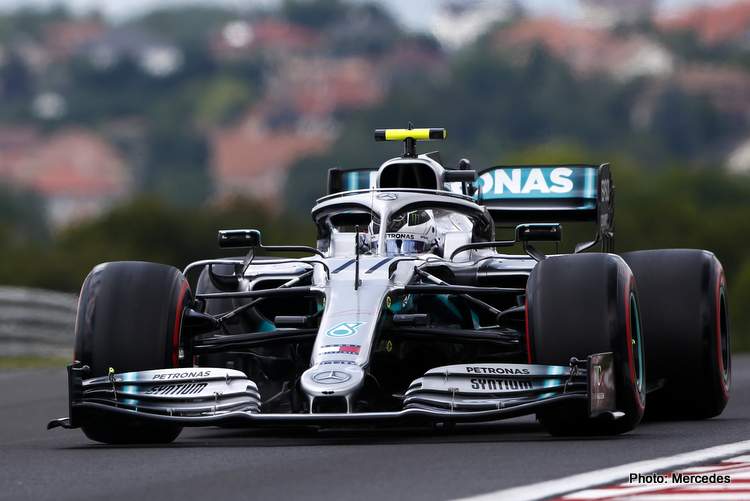 Mercedes report from qualifying for the Hungarian Grand Prix, Round 12 of the 2019 Formula 1 World Championship, at Hungaroring near Budapest.

P2. Valtteri Bottas: “I’ve been chasing a little bit this weekend, after missing out on Practice One and only doing limited laps in Practice Two. I only really started getting into my rhythm this morning and it was just getting better and better through Qualifying.

“So, I’m pleased with the lap in the end. It was very close with Max but he just managed to sneak ahead. They’ve been quick all weekend but tomorrow is what counts. We’re here to fight for the win and there’s a lot of support for me from the Finnish fans, so we’ll be giving it everything and it’s going to be a good battle.”

P3. Lewis Hamilton: “Naturally, we’re always targeting first place. But Max did a great job, congratulations to him, and so did Valtteri. It got away from me a little bit during Qualifying. It was a difficult session, the car didn’t feel quite the same as in FP3 and I struggled a bit.

“But we’re still in the fight and in a good position for tomorrow. There’s a long run down to Turn 1, so it’s going to be very interesting. It’s not the easiest place to overtake, but strategy will come into it. So, we’ll be pushing hard tomorrow.

Toto Wolff: “That was a very close session and exciting to watch but we didn’t come out on the right end of it. I don’t think our car was the quickest today: Valtteri had an almost perfect lap but it wasn’t quite enough for pole, probably when we look back at it we will see some places where we could have gained a fraction of time.

“Lewis wasn’t feeling as comfortable and the car didn’t let him make the steps forward we normally see in qualifying. Our feeling is that we haven’t progressed with the car as we would have hoped, so we need to dig through the data and find out why.

“Tomorrow’s race will be hard-fought: this is a tough circuit for overtaking, so the start will be important, then it will come down to strategy and making the most of our opportunities. There is still everything to play for.

Andrew Shovlin: “It’s always frustrating to miss out on pole by such a small margin but Valtteri did a great job considering he effectively missed the first practice session. When it’s that close there are so many places and ways that you could have made up the difference, but the bottom line is that we weren’t quick enough.

“The balance wasn’t perfect, we picked up a bit of rear grip during Qualifying and ended up struggling to turn the car in some of the slow corners which cost a bit. It’s a difficult track to overtake on but we’ve got two cars near the front and hopefully that will give us a bit of opportunity to put Red Bull under pressure.

“We’re not sure where our competitors will be on pace tomorrow as the running was so limited on Friday. We did manage to do a long run on the Medium with Lewis and it seemed to be working well on our car but it’s hotter tomorrow so we’ll need to wait until the opening stint to see where we are.