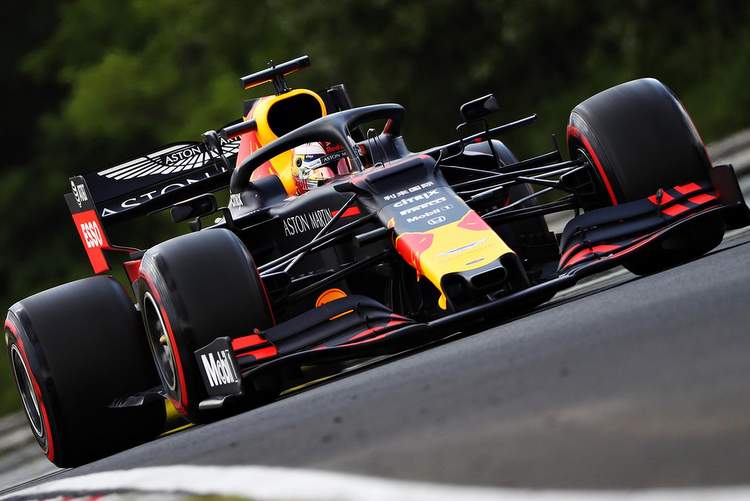 Max Verstappen left the best to last as he powered to the first pole position of his career, the Red Bull man fended off both Mercedes drivers during qualifying for the Hungarian Grand Prix, Round 12 of the 2019 Formula 1 World Championship, at Hungaroring near Budapest.

The Dutchman sent his Orange Army into raptures as he set himself up for back-to-back victories by claiming the top spot start for Sunday’s race in the wake of his famous victory in Germany a six days ago. He also became the 100th driver to claim pole position in F1 with his feat on the day.

It was a no-holds-barred battle between power versus downforce+driver, Mercedes versus RB15+Verstappen, and on this afternoon the 21-year-old shooting star made the difference.

Verstappen gave a hint of what he had when he backed off during his final Q2 effort, then in Q3 he popped the best lap with his first effort, breaking into the 1:14s zone and then, incredibly, found a further four-tenths more with a mega-effort that stopped the clocks 1:14.572, good enough by 0.018 of a second!

The 21-year-old Dutchman beamed afterwards, “It’s incredible. This one was still missing, and you know it’s always going to be hard in qualifying but we managed to do it. The car was flying and it was incredible. There’s still a race to do, and that’s the most important thing. But it’s nice for the team.”

In stark contrast, Pierre Gasly was eight-tenths of a second shy of his Red Bull teammate but still good enough for sixth place. No contest between the pair, perhaps more so today than ever before.

After crashing out of the race he could have won last weekend at Hockenheim, Valtteri Bottas raised his game to claim second spot on the grid with a solid effort which was only a couple hundredths shy of the top time, but a tenth faster than Mercedes teammate Lewis Hamilton in third.

Bottas summed up, “We’ve been chasing it pretty much all weekend since missing practice one, but we really only started to get into the rhythm of it this morning. It was getting better and better in qualifying and I was pleased with the time in the end. I’m still going to fight for the win and with this support, that could make the difference.”

Hamilton added, “Naturally, you’re always going to be targeting first, but Max did a great job and so did Valtteri, and it kind of got away from me a little bit in qualifying but I’m still in a good position to fight for the win. I’m always down for a fight. There’s a long way down to Turn One so it should be interesting. Hopefully, we can give them a run for their money.”

Ferrari knew they would struggle in qualifying and when the cards were down the Reds were shy of the top time by nearly half a second with Charles Leclerc 0.471s down on the benchmark and fourth fastest, a couple of hundredths up on Sebastian Vettel in the sister car who will line-up fifth on the grid.

Notably, Leclerc made a mistake during his second run in Q2, clipped the wall when he his car snapped on him as he came on the gas off the apex. the incident broke his rear wing which was replaced between sessions.

He told reporters after the race, “I’ve been very lucky to go again and I have to thank the team for what they did. “It was a completely unnecessary mistake at that moment in qualy, and that’s two mistakes in two Grand Prix races.

“I need to learn from these mistakes, and I need to work on that, but on the other hand, Q3 was very positive. I was very happy with my lap overall,” added the Ferrari driver.

It was another strong showing by McLaren who found good pace for Saturday afternoon’s session with Lando Norris making the most of the handy package to end Best of the Rest in seventh, and 0.052 of a second up on teammate Carlos Sainz for an all orange fourth row on Sunday.

With the same power units, Renault were again well below par as they messed up Daniel Ricciardo’s second Q1 run by sending him out into traffic in which he tripped himself up by trying to jump the queue and messed up the start of his lap.

It was a little better for Nico Hulkenberg, but he was only good enough for 11th, but all-in-all a downright poor showing for a team.

Running his Melbourne-spec chassis, and thus ditching all the development buts rolled out for the Haas, Romain Grosjean was good enough for ninth, while teammate Kevin Magnussen who appeared to find the sweetspot during FP3 but a couple of hours later was only good enough for 15th.

Alfa Romeo veteran Kimi Raikkonen rounded out the top ten, again quicker than his rookie teammate Antonio Giovinazzi down in 14th, three tenths shy of his older teammate, the Italian handed a three-place grid penalty after the session by FIA stewards for impeding Lance Stroll in Q1.

Ricciardo’s shenanigans also tripped up Sergio Perez’s last effort and he too was doomed to Q1 exit as was Stroll in what was a low blow for Racing Point who have been rolling out a virtually new car during this period. They were 17th and 19th respectively on the timing screens.

The star of Q1 was undoubtedly George Russell who yanked the ill-performing Williams from their usual back-row perch to claim 16th place on the time-sheets and only narrowly missing out on Q2. The kid showed why he is the real deal.

As soon as the lights went green at the end of the pit lane to signal the start of Q1, Verstappen made a strong statement, with the Dutchman posting a lap of 1:15.917 to top the timesheeet. It was a time none of his rivals could match in this first segment, though Hamilton got close with a lap of 1:16.068 to finish second ahead of Bottas and Magnussen.

Fifth and sixth places went to Leclerc and Vettel. Leclerc hit trouble in this opening phase, however. The Monegasque lost control of his car on entry to the final turn during a flying lap and spun backwards into the barriers. He was able to limp back to the pits where his crew began repairs ahead of Q2.

At the lower end of the order Russell was the first man eliminated in P16. The Williams driver exited ahead of Pérez, Ricciardo, Stroll and P20 man Kubica.

For the top three teams the yellow-banded medium tyre was the compound of choice for the first runs of Q2. Hamilton took top spot with a time of 1:15.548, but Verstappen shadowed him closely with a lap 0.025s off the Mercedes drive’s pace. Bottas was a tenth further back in third place ahead of the Ferraris of Leclerc and Vettel.

In ther final runs of the segment, the drivers at the top of the order went out again on soft tyres, but after posting purple times in the first two sectors Verstappen, Hamilton and Bottas backed out their laps.

With Ferrari running medium tyres throughout Q2, and with Gasly matching that tactic in the second Red Bull on his way to P9 in Q2, all drivers from the top three teams in the championship with start on the yellow-banded Pirelli compound.

Eliminated at the end of the second segment were 11th-place Hulkenberg followed by the Toro Rosso duo of Albon and Kvyat, Giovinazzi and Magnussen.

The final segment saw Max become the first man to dip below 1m15s and the Dutchman claimed provisional pole with a super lap of 1:14.958. That left him 0.178s ahead of Bottas and a hundredth further ahead of Hamilton.

And there was no denying Verstappen Max in the final run. Bottas pushed the Dutchman hard, but with a smattering of purple micro-sectors across his lap Max pulled clear of the Finn to beat him to the front of the grid by just under two-hundredths of a second.

Hamilton too found a substantial improvement on his final lap but it wasn’t enough to lift him higher than third place, almost two-tenths of a second off pole. Fourth place on the grid went to Leclerc, almost half a second behind Max, with Vettel fifth.

Gasly held onto sixth place at the end of qualifying, finishing just over three-tenths of a second behind Vettel and improving to a time of 1:15.450. 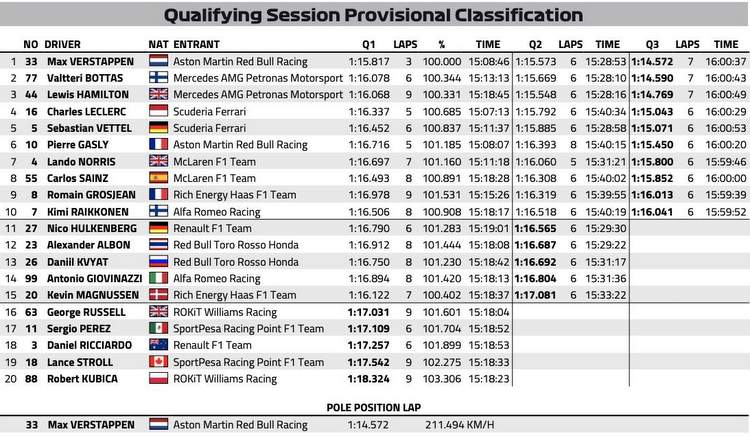