Renault: We confirmed we had gone in the right direction 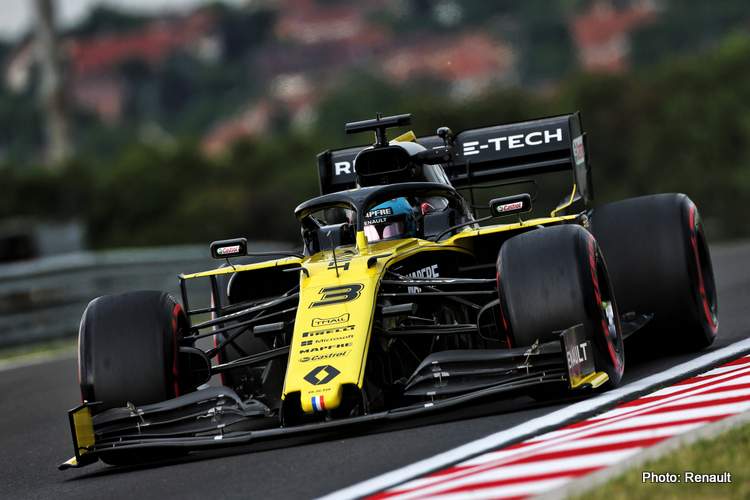 Renault F1 Team’s Rolex Hungarian Grand Prix weekend got underway on Friday at a rain-hit Hungaroring. With dark clouds circling the track throughout the day, running was limited in the morning and reduced to just a handful of laps in the afternoon.

In the morning session, Nico Hülkenberg was the quicker of the two drivers in seventh with Daniel Ricciardo eleventh. Intermittent rain hit the track throughout the morning session before returning again during Free Practice 2, which limited both Nico and Daniel to a combined 27 laps in FP2. Daniel recorded the fifth fastest time in Free Practice 2 with Nico closely behind in eighth.

“Overall, it’s been a decent day for us. It was a little bit different to a normal Friday with the conditions and the rain throughout both sessions. We weren’t able to learn the usual things we do during practice and everyone will be a little in the dark tomorrow and the rest of the weekend, which isn’t necessarily a bad thing. I feel we can be in a good position, the car didn’t feel too bad, especially in the afternoon on our Soft run.”

“It was a pretty good day, even if the weather wasn’t great. We had a positive afternoon with the few laps we managed to complete. We made some progress after a tough morning but there’s a bit more to find tonight. I felt more confident in the car in the afternoon, so that’s promising. We’ll see what happens tomorrow, there is a chance of rain again so it could be interesting. It’s the last one before summer too, so let’s get it!”

Nick Chester, Chassis Technical Director: “With this kind of changeable conditions, you have to try to get everything in that you can before the rain hits. At the start of FP1 neither driver was satisfied with the set-up, but we made some changes and they were much happier.

“In FP2 we really only got two short, dry runs but we confirmed we had gone in the right direction and we were able to make some further improvements. We did some running on Intermediates as it could well rain again tomorrow right on the bell. End of session they again seemed pretty happy with the car on Inters too.”