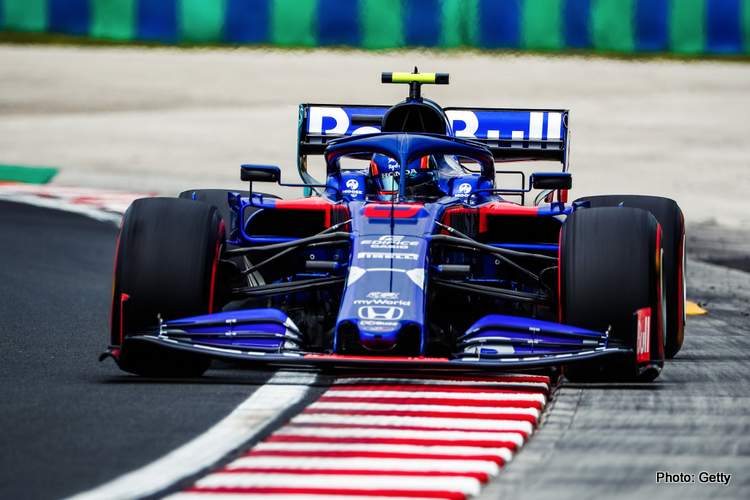 Wet weather made for a tricky afternoon of practice at the Hungarian Grand Prix, but there was strong pace for Aston Martin Red Bull Racing.

The opening session was an encouraging one in the dry, with Max – despite struggling with the handling and having two spins – ending up second fastest, 0.165s away from the quickest time of the session. Pierre was also showing up well in fourth place, a little under 0.3s off his team-mate.

For Toro Rosso it was a solid start, with Daniil and Alex ending up 13th and 14th respectively, and Daniil was within 0.2s of the top ten. Unfortunately, Alex suffered a crash at the start of FP2 that ended his session early.

Towards the end of his second lap, Alex touched the grass at the entry of the final corner and slid into the barrier. He was using his Friday power unit and gearbox so will not receive a penalty, and we’ll also inspect any damage to see if the components involved in the crash can remain within the pool.

Light rain was already falling at that stage and continued to intensify, with the final running taking place on intermediate tyres. That meant the early lap times proved crucial to the final standings and Red Bull took a one-two as Pierre was fastest overall on soft tyres, just ahead of Max on mediums, while Daniil also finished the session in tenth place.

Toyoharu Tanabe, Technical Director: “FP1 was dry and FP2 was wet, which is actually quite useful as the forecast suggests it could rain for tomorrow’s qualifying. Aston Martin Red Bull Racing’s weekend got off to a solid start, while Scuderia Toro Rosso’s package has more room for improvement and we will work on that overnight. Alex’s crash was unfortunate, but at least he was unhurt. ”