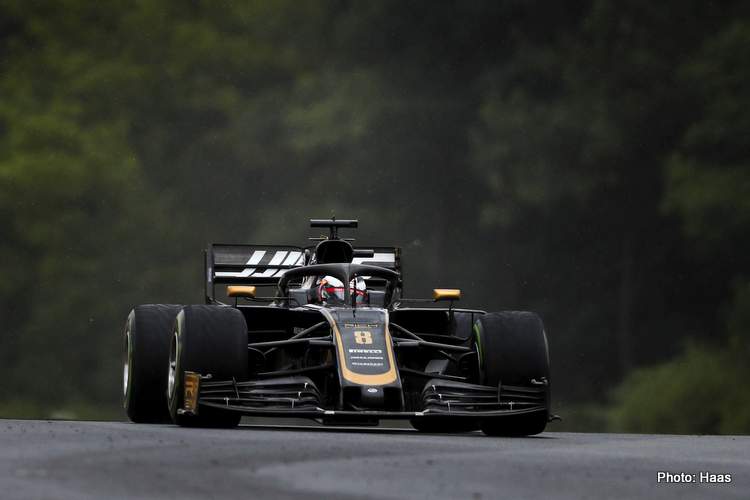 Haas F1 Team report from day one of free practice for the Hungarian Grand Prix, Round 12 of the 2019 Formula 1 World Championship, at Hungaroring near Budapest.

Rich Energy Haas F1 Team drivers Romain Grosjean and Kevin Magnussen are utilizing dual aero specs on their respective Haas VF-19 racecars for the third consecutive race weekend, Grosjean’s reverting to the spec he opened the season with in Australia while Magnussen is carrying on with the most recent upgrades he first utilized last weekend in Germany.

Both drivers began FP1 on the Pirelli P Zero Yellow medium tire before a light rain sent them to the pits to take on the Green intermediate tire for an exploratory run. As track conditions improved they switched to the Red soft tires, on which they set their fastest laps. Magnussen was fifth on the timesheet with a lap of 1:17.942 and Grosjean 12th with his lap of 1:18.973.

Light rain persisted throughout FP2, making tire decisions a challenge for teams. Grosjean started on Yellow mediums, on which he set the 11th-best time of 1:19.149. Magnussen, who started on White hard tires, clocked a comparable lap of 1:19.178 for 12th on the timesheet. Grosjean and Magnussen ended the afternoon lapping on intermediates, with further rain expected Saturday.

Romain Grosjean: “We struggled a little bit in the morning to get the balance of the car right, especially on the C4 soft tires. We know the old spec car doesn’t like the colder temperature, and today it just wasn’t warm enough to get the tires to work – therefore the balance gets really unpredictable and not so nice to drive.

“We made some progress in the afternoon, though it was still quite cool early in the session, it wasn’t ideal. Eventually the rain the came and we got a bit of a taste of the inters. We tried to find what the balance was like in case there’s rain tomorrow.”

Kevin Magnussen: “It wasn’t too bad in FP1, it was fast, but we’ll see. There’s a high chance of different conditions tomorrow, either with temperatures or weather. We’re keeping our feet on the ground because we’ve seen big changes before, where it’s just been a small change in conditions, in temperature, and it can mean a lot.

“We did get some wet running on in the intermediates, it’s good to feel the car on that tire, in case it’s wet tomorrow. It looked good, competitive, so overall it’s not been a bad day, but we’ll see tomorrow.”

Guenther Steiner, Team Principal: “Two sessions dominated by the weather conditions. In FP2 we took the opportunity to stay out on the intermediates quite a bit to learn more about them, because we haven’t had a lot of opportunities to test them this year – so that was good to learn. For everything else, it’s very difficult to analyze what’s happening. Hopefully tomorrow we’ll have more stable weather.”