Ferrari: Not the most useful of Fridays 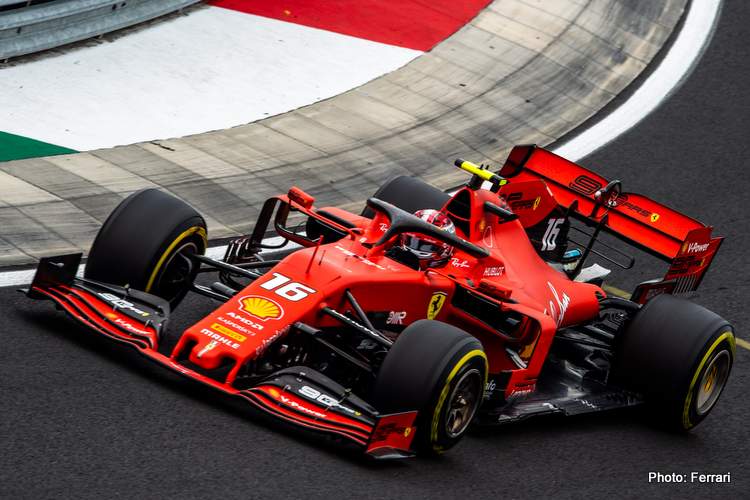 Friday’s free practice sessions for the Hungarian Grand Prix were not the most productive for Sebastian Vettel and Charles Leclerc, as indeed for the other 18 drivers out on track.

The first session was slightly affected by light rain, but heavier more consistent wet weather was a feature of the 90 minutes of afternoon track time.

FP1. In the morning, the two Ferrari drivers ran the Soft tyre while working on dry set-up. Sebastian and Charles completed 54 laps between them; 25 for the German, the best being a 1’17”399 which put him third on the timesheet and 29 for the Monegasque, the quickest a 1’18”188, making him sixth.

FP2. A few minutes after the start of the afternoon session, rain fell again at the Hungaroring, so that everyone headed back to the garages. Up to that point, Charles Leclerc’s best time was a 1’18”852, which put him seventh on the timesheet. Sebastian Vettel stopped the clocks in 1’19”254, which in the end made him 13th fastest. The rain then intensified as the session progressed and the drivers went back out on intermediate tyres to gather data, as so far this season, this type of tyre has not been required much at all. In the second session, Sebastian did 24 laps, three more than Charles.

Tomorrow. The forecast suggests there should be no more rain for the rest of the weekend, so the third free practice session which starts tomorrow at noon CET, will be vitally important to prepare for both qualifying, which starts at 3pm and for Sunday’s race which gets underway at 3.10pm.

Sebastian Vettel: “The morning session wasn’t bad. I’m sure we can improve quite a bit because I don’t think we got all the potential out of the car on my quickest lap. In fact, more than going for a lap time, I was trying to get a good feeling from the car, which is why I think we can make progress. Having said that, we must wait until tomorrow to see where everyone stands and we know there is still work to do.

“There’s not much to say about the afternoon, even if, in sessions like the second one there is always something to learn. For example we were able to do a few more laps on the intermediate tyres, after those we did in Hockenheim and that was useful for me.
As for the aero updates, it’s difficult to assess, but I can say they worked as we had expected.”

Charles Leclerc: “It was quite a difficult day. We faced mixed weather conditions, the first session being relatively dry and the second rainy. Overall, from my side, we struggled with the car balance and are now working on finding a way to improve this for tomorrow.

“I think that I was in a better shape in the wet, so it will be interesting to see what the conditions will be like in qualifying. On the upside, we tested some new parts today which worked as expected. Hopefully, we can make a good step forward.”