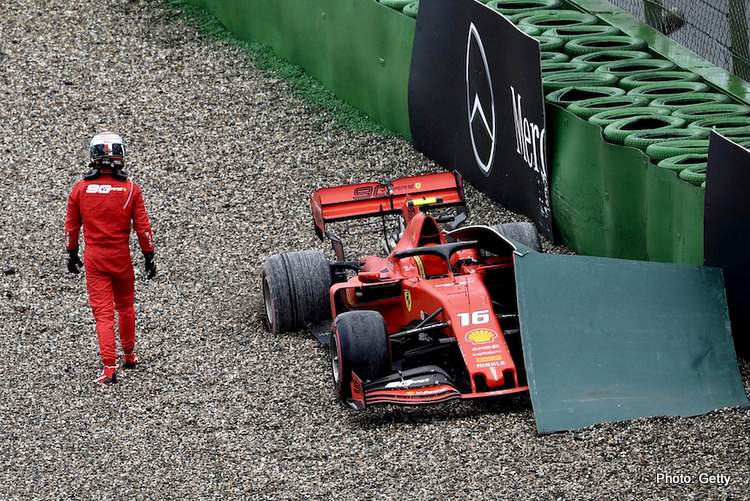 A frustrated Charles Leclerc said that the low-grip asphalt used on the outside of the final corners, where the Ferrari driver made a mistake and crashed out of Sunday’s German Grand Prix, is “unacceptable” in Formula 1.

The Monegasque driver, who had started 10th and climbed into the top six, admitted he was “completely at fault” for his accident in Turn 16 as he prepared to take the lead of the chaotic rain-hit race.

“I’m disappointed with myself,” he said. “It wasn’t a huge mistake. It’s a small mistake and I’ve done a lot bigger mistakes during the season.

“It doesn’t make anything better for my mistake, but, first of all, I think the asphalt in the last two corners – it’s just unacceptable that we have that on a F1 track when it’s wet.

“We can’t have so much low-grip. We’ve seen other drivers too, maybe I was the only one on slicks, but I was at 60kph and had absolutely no grip. There’s something there. It’s like a dragster track and once you go on it, it’s just very, very dangerous.”

“But overall that does not forgive my mistake. I’m completely at fault today and it’s a huge shame. I’m very sorry for the fans and the team,” the 21-year-old added.

Pn the day several top drivers skidded off the track in a similar fashion in the same part of the circuit – adjacent to the entry of the pitlane – including championship leader Lewis Hamilton of Mercedes and his team-mate Valtteri Bottas and Nico Hulkenberg of Renault.

Leclerc’s teammate Sebastian Vettel finished a delighted second after starting from 20th and last on the grid, “It took a while — I don’t think there was a problem, but at the beginning, with the intermediates, I couldn’t get the hang of it.”

“But, eventually I got going, so it’s good the afternoon took so long. I stayed tidy for most of the race. It was a long one!” reckoned the German.

Big Question: Were conditions too dangerous to run the race at Hockenheim?