Kvyat: It was a horror movie with a black comedy 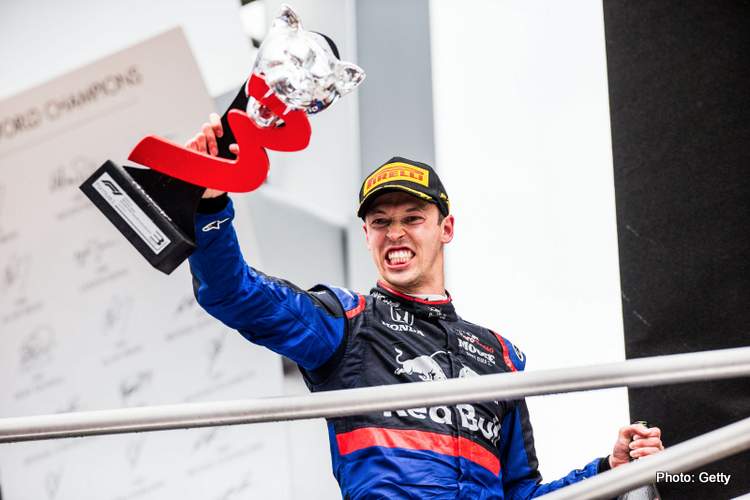 Red Bull has ruled out replacing Pierre Gasly with on-form former team driver Daniil Kvyat before the end of this season, despite the fact that at Sunday’s German Grand Prix the Russian scored junior team Toro Rosso’s first podium finish since Sebastian Vettel won at Monza in 2008.

“It was a horror movie with a black comedy,” replied Kvyat with a huge grin when he was asked about the sensational wet race at Hockenheim.

“At some point I thought the race was done for me, but then it came alive again, it was an incredible rollercoaster. A bit like my whole career,” he added with a laughed.

It has also been a rollercoaster last 24 hours for Kvyat, with his girlfriend Kelly Piquet giving birth to their first daughter late on Saturday.

Now, the 25-year-old is on top of the world, despite the lows of almost seeing his F1 career end altogether when he was ousted by Red Bull in late 2017.

“It was an incredible few years in my life,” said Kvyat. “It was sometimes tough times and I thought maybe Formula 1 was over for me, and especially the podium.

“I thought I would never have that again, but life just proves that if you work hard and never give up, things are possible.”

One of those possible ‘things’ is that Kvyat could return to Red Bull’s senior team, particularly as Pierre Gasly has struggled for much of 2019 and was humbled by both Toro Rosso drivers during the race, and of course the Frenchman absolutely no match for race winner on the day, his teammate Max Verstappen.

Kvyat has returned to the top flight a matured man and his undeniable talent again allowed to surface and Hockenheim was a loud and clear message to all, “It was hard work to reach this moment and hopefully I can send the message out there that I’m ready now to fight for this kind of moment on a consistent basis.”

However, Helmut Marko – Red Bull’s ruthless driver manager – is ruling out changing the driver lineups at Toro Rosso or Red Bull at least for the rest of 2019, “We have the teams that we have and we will finish the season that way.”

Ironically Marko said similar things about Kvyat before he surprised the paddock and demoted him from Red Bull to Toro Rosso and promoted Verstappen in his place back in 2016.

Big Question: Should Red Bull give Daniil another crack at the big team? If so when?

This picture says it all.