Leclerc: It’s a shame and I am sorry for the team and our fans 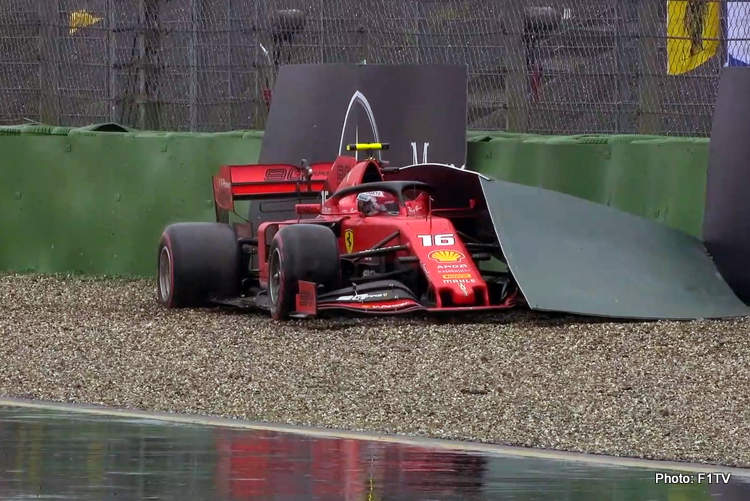 The deja vu was inevitable: a red Ferrari showing hot pace loses control and slithers across the gravel and into trackside billboards, beached in the sand when a a sure podium and even a sniff of victory was apparent.

That’s how Charles Leclerc will be remembered his role in the epic that was the German Grand Prix, doing a repeat of what his teammate Sebastian Vettel did last year at the same venue.

In doing so the younger driver denied himself a sure second place and perhaps even first as when he crashed he was among the fastest drivers on track although he did himself no favours with a scrappy lap or two, but the same applied to his rivals fighting the constantly changing elements.

But lap 27 changed all that, as he hit the barriers exiting the final corner (which caught out many of his peers on the day) when the Ferrari got airborne over the kerbs, on the tractionless slippery edge of the track, and car plunged straight into the barriers and turned Leclerc into a spectator for the rest of the afternoon.

The 21-year-old reflected afterwards, “Unfortunately, I made a mistake in turn 16 and lost control of the car. I hit the wall and that was the end of my race. It’s a shame and I am sorry for the team and our fans. Seb did a great job today and his result is well-deserved.

“It is a disappointing end to the weekend for me. After a good start, we worked our way forward in rather tricky conditions. The team did a great job and let me arrive in second place to fight for the win. The strategy was the right one and the car felt good.”

“Our car and performance were strong all weekend, in both wet and dry conditions, which is a positive. We have to stay focused and we will give our best again at the next race in Hungary,” he added.

Ferrari team boss Mattia Binotto commented, “Charles is aware today was an opportunity missed, but he will get over it. There are plenty more races and there is no doubt that the guy is very quick and today he was delivering an extraordinary performance.”

In contrast to Leclerc, teammate Vettel delivered a timely performance of a champion as he carved his way through the field from 20th on the grid and salvage second for the Reds. It was a giant effort and result in the wake of the criticism the German has copped in recent weeks.

But in retrospect, it is actually a similar script packaged differently as they are still winless after a weekend that promised so much.

While Leclerc’s error will be a reality check for those who believe he is the saviour for the desperate Italian team. He is indeed the future but that’s long term as he is still an unpunished diamond and he may wake up to find another Vettel, more inspired when they go at it again in Hungary next weekend.