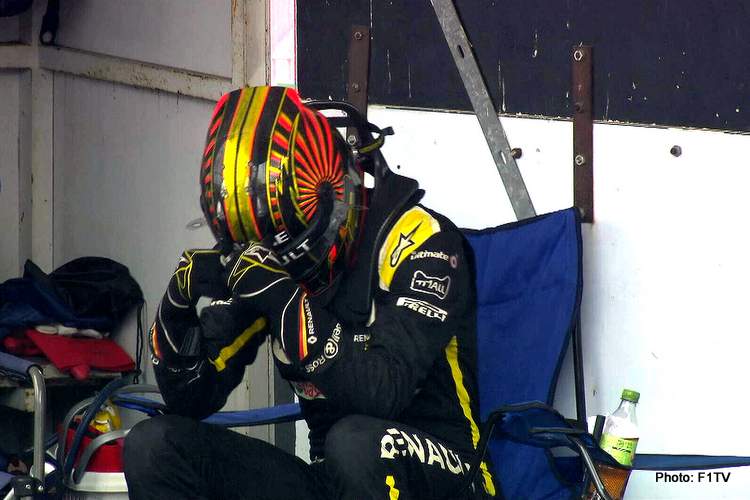 Nico Hulkenberg is 167 Formula 1 races into his career and has yet to celebrate on the podium, a sad statistic for a driver that was expected to do big things in the top flight but his record to date will show him as a luckless journeyman.

That podium drought looked set to end at his home German Grand Prix on Sunday but fate had more sinister plans as Hulkenberg crashed on lap 39, having run as high as second place and was in fourth when his mistake brought an end to his hopes.

He too was a victim of a treacherous patch of waterlogged, wet and slippery tarmac in the final turn which caught out several of his rivals. On Pirelli intermediates, the Renault driver locked up his brakes, sliding into the barriers where his car remained beached.

Hulkenberg said afterwards, “It’s a tough one to take. I’m upset for myself, the team and for Renault because they deserved an excellent result today. It’s one of those days where you have to make it stick, and I’m just gutted with how it ended especially in front of the home crowd.”

“The final corner was very tricky as it was damp. I lost the rear a bit, went into a spin so I opened the steering and went onto the black tarmac. It was like ice there and by that point I couldn’t stop the car.”

“We were doing a phenomenal job, strategy was very difficult so it hurts and it will hurt even more tomorrow,” added Hulkenberg whose teammate Daniel Ricciardo retired early on in the race when his Renault PU expired in a cloud of smoke.