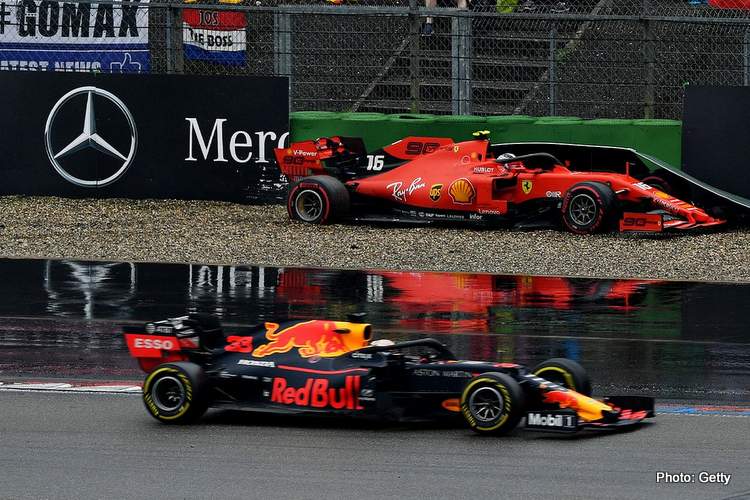 Where to start!? The German Grand Prix of 2019 might be the last for some years, but it will definitely go down as one of the most exciting races ever witnessed at the venue – perhaps in Formula 1 history – as Max Verstappen triumphed in crazy conditions that took its toll on the best of the best.

The Dutchman emerged from an incident-packed thriller, to claim victory, while all around him lost their collective heads. He recovered from a tardy front row start which saw him gobbled up and in the wars for most of the frantic early stages of the race, including a spin!

Mercedes were celebrating 120 years of motorsport this weekend and what a nightmare that turned into as both their drivers crashed, Lewis Hamilton managed to continue but was last of the runners and penalised five seconds for his post-crash pit entry, while Bottas pranged heavily exiting Turn 1 late in the race with a podium on the cards.

A weekend to forget for the German team celebrating their 200th Formula 1 race.

The race goes from bad to worse for Mercedes 👀

Earlier no one would have backed a dollar on Verstappen recovering from a wayward early spell and a good old moan for being on the ultra-slippery mediums which provided some hair-raising moments on his roller-coaster ride to the top step of the podium.

By the time the spray had settled the #33 Red Bull eked out a ten seconds lead and it stayed that way until the end, bagging the fastest lap point with his effort on lap 61 of the 64 lap race.

After two days of scorching heat, the skies opened up over Hockenheim forcing the German Grand Prix to start behind the safety car as rain fell after lunch which turned the circuit wet with patches of standing water. It looked pretty tricky.

After a couple of sightseeing laps behind the safety car they lined up for a standing start. Pole winner Lewis Hamilton was well off the line with his teammate from third place tucked behind the leading Mercedes while Max Verstappen, from second, was tardy off the line as he struggled to find grip and was gobbled up.

But that was nullified when shortly after the field was released Racing Point’s Sergio Perez crashed when he aquaplaned and speared into the wall.

Sergio Perez is out after colliding with the wall 💥

What followed in the race will take volumes to describe as they hit that no-man’s land of when to swap to slicks. Most got it wrong and, in retrospect, there was no benchmark to follow as everyone were affected differently.

But soon it became apparent that slicks might have been marginally faster as Kevin Magnussen bolted a set on and was three seconds faster than anyone at that point. Like sheep they all followed, some opting for softs and others mediums.

Most pulled the trigger too early as the skies opened up again which prompted the mayhem that turned the race on its head.

Charles Leclerc looking strong with the benefit of a well-timed pitstop under VSC conditions, the Ferrari youngster looking feisty until he made a mistake, much like Sebastian Vettel’s faux pas last year. The Monegasque’s race over on the spot.

Earlier his team were handed a fine for an unsafe release during his pitstop, the Ferrari nearly clattering into the Haas of Romain Grosjean.

The safety car is in coming in! 🍿 Max leads the pack, Pierre is P9 🇩🇪 #GermanGP pic.twitter.com/qSbQK553OQ

Thereafter it was chaos on track and even more so in the pits. A proper brawl as drivers and teams were taken apart by the conditions they always revel to race in.

We had a Racing Point in the lead briefly, a Toro Rosso with the fastest lap as the weather really levelled the playing field then wobbled it all afternoon.

But in the end the day belonged to Verstappen who said afterwards, “It was an amazing race to win in the end, it was really tricky out there to make the right calls, and we really had to be focused. We had a little moment on the slick tyres, but it was a really nice 360! I enjoyed that, but it was all about trying to not make too many mistakes. You learn over the years.”

Red Bull and Honda need a standing ovation along with their star driver who got one from his Orange Army, while Daniil Kvyat gave a good case to his bosses to dump wretched Pierre Gasly with immediate effect and give the Russian another crack with the big team because he ticked all the boxes on a torrid afternoon.

His teammate rookie Alex Albon was also impressive on his way to sixth. The manner in which he twice dispatched of Gasly twice, late in the race is sure to be the final straw that will prompt the axe, because the Thai driver made it look simple in an inferior car.

It was some sort of redemption for the German who last year dumped it while leading the race and gave his team reason to believe when some may have had doubts. But he had no ammo to close the four-second gap that Verstappen had when it mattered.

Vettel summed up afterwards, “It was a long race, at some stages it felt like it would never end and it was very tough with the conditions and I’m just happy. It was a lot of fun. It took a while, at the beginning with the intermediates I couldn’t get going but eventually it was good that the afternoon took so long and I stayed tidy for most of the race.

“For me, it was just a case of go and get the next car, and then the next car. Before the last Safety Car, I realised I was quite a bit quicker and could move past people. I was a little bit faster and could time it right. I saw people being cautious on the first corner and it worked getting into DRS range and I had moves down the back straight. But this race was so long,” added the Ferrari driver

Another German, Nico Hulkenberg, also survived the early shenanigans and was running strongly in second place for Renault, after Daniel Ricciardo retired early in the race with a smoking engine, but on slicks he made a mistake and slithered into the barriers.

At one point Lance Stroll looked set for a podium, the Canadian again proving his worth in races of high attrition to deliver one of his best performances in a long while which will do the world of good to his confidence and reputation. He was fourth.

Carlos Sainz was another ‘war survivor’ who survived a spin and several tense battles to finish on a day in which he was the only Renault powered driver to finish the race. Fifth a good result on a weekend in which the midfield was closer than ever.

Alfa Romeo celebrated a double points finish with Kimi Raikkonen and Antonio Giovinazzi seventh and eighth respectively but that only lasted three or so hours when the cars were found to be illegal and penalised accordingly. Report here>>>

This promoted Haas duo of Romain Grosjean to seventh and Kevin Magnussen to eighth claiming the final point, the Dane at one stage running second in the topsy-turvy race!

Hamilton thus was promoted to ninth and Kubica getting the final point for Williams. 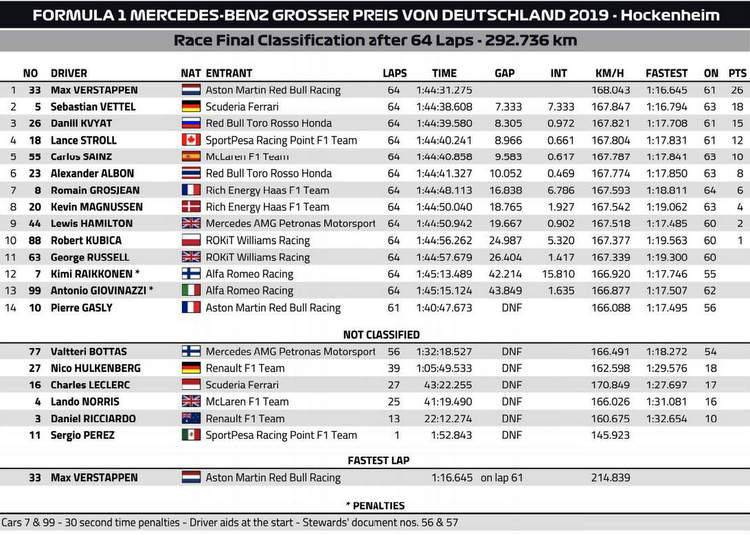 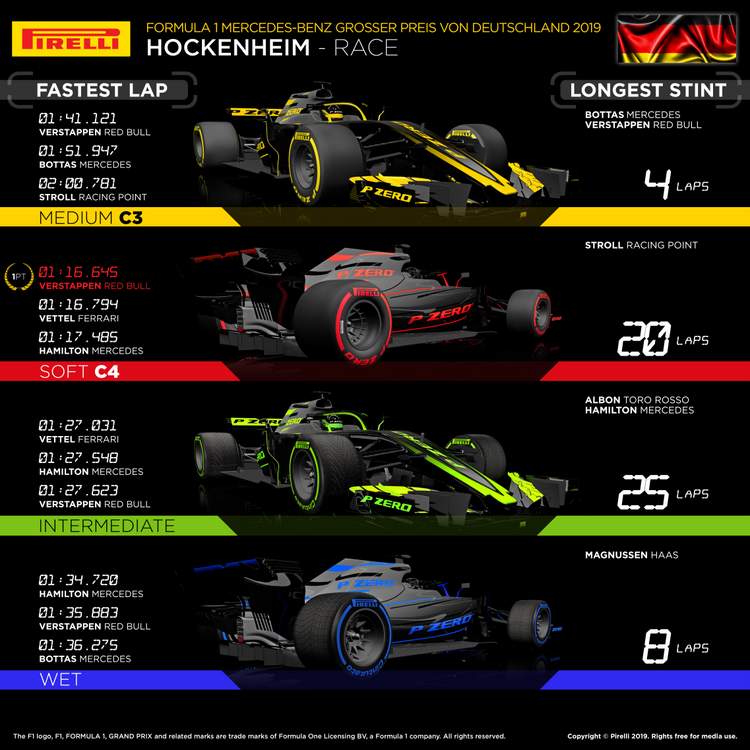 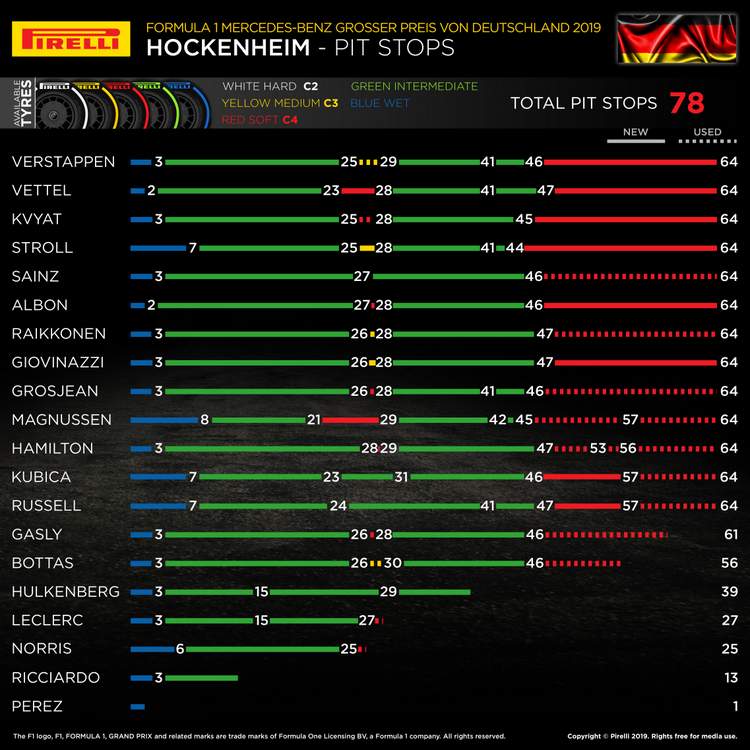