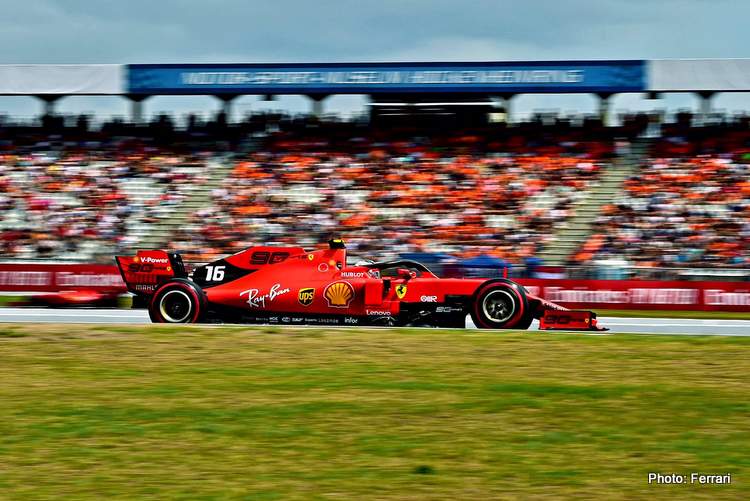 The sport’s two future superstars are set to slug it out for pole position this afternoon in qualifying for the German Grand Prix as Charles Leclerc pipped Red Bull’s Max Verstappen for top spot on the timing screens after the one-hour midday session at Hockenheim.

Leclerc topped the timing screens as he did in FP2 yesterday, the Ferrari driver’s best effort of 1:12.380 was 0.168 of a second up on Verstappen in second place as the Red Bull driver showed a hint of what Honda might have in store for quali later in the day.

Local hero Sebastian Vettel was third fastest, a quarter of a second shy of his teammate’s table-topping effort.

Valtteri Bottas, in fourth, was a tad quicker than Lewis Hamilton in the sister car but the silver cars were wanting half a second to the benchmark time. It would be fair to say that the World Champs are searching for the weapons to take on their rivals as they celebrate 125 years of motorsport history at their home race.

The pair were split, surprisingly and quite remarkably, by the Haas of Kevin Magnussen as the American team throw everything at it to get to the bottom of their inexplicable tyre and setup woes.

Team chief Guenther Steiner claimed to be perplexed by the newfound pace as the car setup was not altered since the previous day. As a result, the Dane found himself sandwiched between the Mercs on the timing screens, a mere half a tenth shy of the top time.

Romain Grosjean rounded out the top ten, albeit four-tenths slower than his teammate.

Also finding handy pace overnight was Carlos Sainz who was seventh fastest in the McLaren, three-tenths up on teammate Lando Norris down in 14th, the rookie struggling to find the sweet spot so far this weekend.

Notably, FIA stewards were keeping an eagle eye on track boundary infringements and removed the time if drivers strayed too far over the edge, they bust Vettel and Kvyat twice while Hamilton, Albon and Ricciardo also had times dropped for their waywardness through the final stadium complex of corners.

Nico Rosberg summed up and predicted on Sky F1: “I think we could be in for an epic weekend here because Mercedes are struggling, Leclerc is on absolute fire out there, in great form and driving brilliantly.

“This qualifying is going to be very exciting and tomorrow we’re in for thunderstorms. I don’t think Mercedes know themselves why they’re struggling. They will get closer, but it seems that Ferrari are on for pole.” 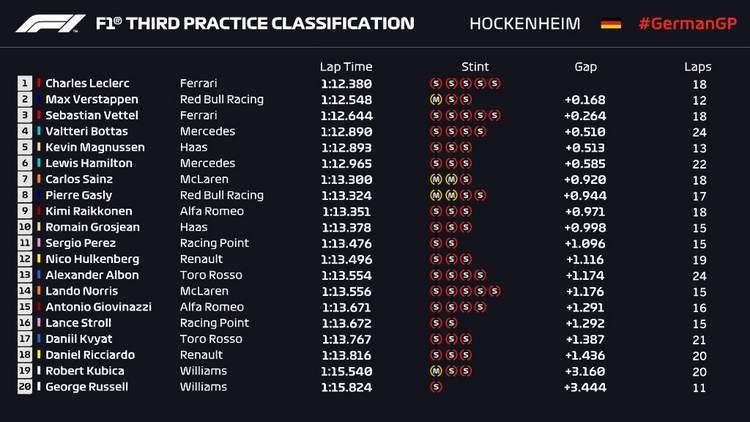