Alfa Romeo: Points are not given on Saturday 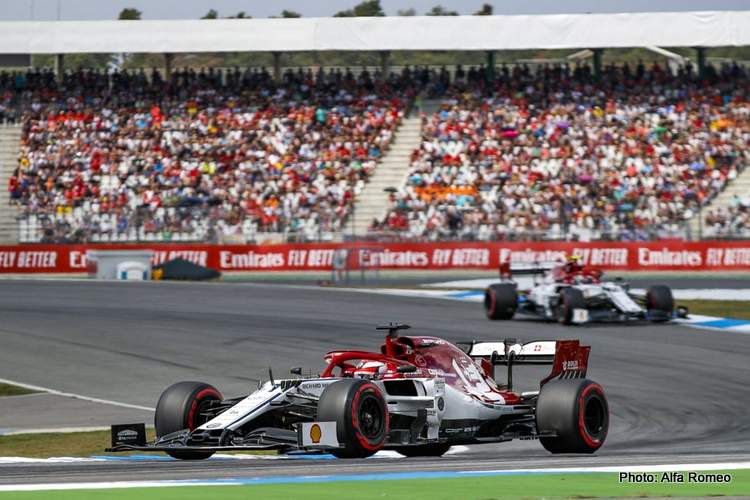 Alfa Romeo report from qualifying day on day two of the German Grand Prix weekend, Round 11 of the 2019 Formula 1 World Championship, at Hockenheim.

Composure is an underrated trait. It may not be as flashy as pure talent or as dazzling as flair – even though it often incorporates those skills. No, composure often flies below the radar, unassuming and unnoticed until you see the end results it produces.

Today, as Kimi Räikkönen claimed fifth place in qualifying for the German Grand Prix, the best Saturday result for the team since the 2013 United States GP, composure delivered. It was the art of keeping your head on while everyone around you is losing theirs, keeping the eyes on the prize and doing your job right.

As a whole, it was a good team performance, with Antonio Giovinazzi, in P11, missing out on a place in the top-ten shootout for an agonisingly small 0.01s, and the engineers and crew reacting well to the changing conditions – a much cooler day after yesterday’s scorching heat – to set up the car in the best possible way.

Our job is by no means finished. Tomorrow’s race promises to be a sizzler, at least by looking at the grid, if not in terms of temperature. Indeed, rain could be on the cards, the weather forecast predicting doom and gloom and plenty of precipitation for tomorrow’s showpiece event. It very well may: we’ll be ready for it. After all, what other scenario would present us with such a test of composure?

Frédéric Vasseur, Team Principal: “Placing a car on the third row is a positive result but points are not given on Saturday, so we still need to focus on our job. We have looked competitive all weekend so far and we are pleased with today’s result.

“Kimi looked quick from Q1 and delivered a good lap in his only attempt in Q3. It was a pity Antonio missed out on the top ten for such a small margin, but he’s still in a good position to have a strong race. The weather will be a big variable tomorrow: finding the right strategy will be crucial especially should the rain come.”

“Qualifying in fifth makes me happy but it’s only qualifying, the race is tomorrow. We made a few gains through other people’s misfortunes, but in the end we still had to put in the laps when it counted and we did. The car has been pretty good today and I think we could have been a bit faster in Q3: maybe fourth place was within reach, but that’s racing. It’s very difficult to read into our race pace from yesterday as the conditions have changed a lot and could be even different tomorrow. We have to see if the rain comes and figure out the weather the best we can. It will be hard to race against the big teams; we’ll just take today’s result as it is, give everything tomorrow and see where we end up.”

“It was a bit frustrating to miss out on Q3 for just a hundredth of a second. We start from just outside the top ten, but tomorrow is the important day and I am confident we can get to the points. We wanted more but if we have a good start and a good strategy we can be in that fight.

“Nobody can predict what weather we’ll have tomorrow and if it starts to rain anything can happen. Having both cars in the top ten is the objective but the key is to continue moving forward.”