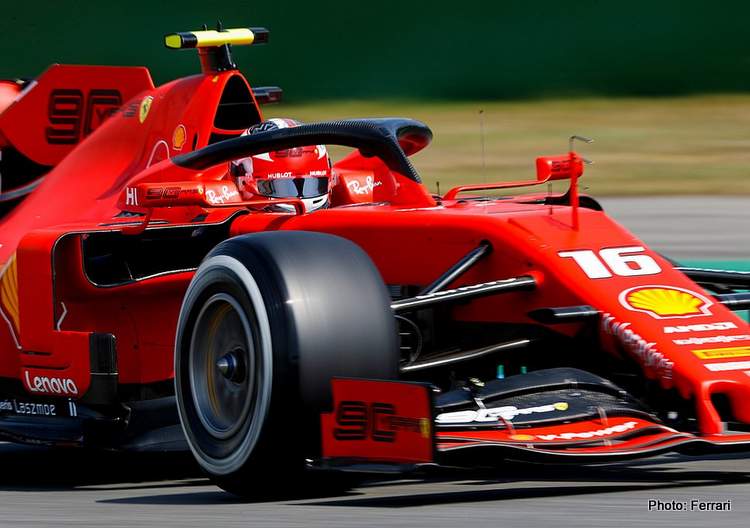 Charles Leclerc topped the timing screens at the end of day one of the German Grand Prix weekend as Ferrari made a clean sweep of proceedings at a sweltering Hockenheimring.

After playing second fiddle to teammate Sebastian Vettel in the morning FP1 session, Leclerc got on the loud pedal to mark a best time of 1:13.449 with the hard Pirelli tyres bolted onto his car.

That was 1 tenth and a bit faster than Vettel in the sister car, although the German set his time on the mediums.

Lewis Hamilton was best of the Mercedes duo, his time 0.146 of a second shy of the top time – very close between the top three on the day.

Next up was Valtteri Bottas in fourth, albeit half a second down on his teammate but a tad quicker than Red Bull’s Max Verstappen in fifth.

His teammate Pierre Gasly had a miserable afternoon after he crashed the RB15 at high speed, forcing the session to be red-flagged with a dozen minutes to go in the 90-minute session.

A dramatic ending to day one in Germany for Pierre Gasly 💥#F1 #GermanGP 🇩🇪 pic.twitter.com/PK8dQDvptd

Romain Grosjean provided his team with a revelation when he powered around Best of the Rest in his Haas, using Melbourne specs! Meaning that whatever the American team had spent (money and time) on development of their package was wasted because they went backwards since the opener in March.

Notably, the Haas driver was only seven-tenths adrift of the benchmark time suggesting that the Big Three teams have not turned up the wick thus far.

Racing Point unbagged a raft of upgrades as they transform their chassis almost entirely in the next two with phase one unleashed today.

Early indications are that there is a significant step up in the right direction as Lance Stroll showed up seventh on the timing screens, less than a tenth off Grosjean – the kind of territory the Canadian youngster has not had the good fortune of playing within this season thus far.

Kimi Raikkonen was eighth fastest in the Alfa Romeo, a fraction quicker than ninth-placed Nico Hulkenberg who was fastest of the Renault powered brigade and the only one of the quartet in the top ten. But the German stopped before the session ended with “a software” issue.

Sergio Perez rounded out the top ten in the other Racing Point, the Mexican a couple of tenths down on his teammate and in a midfield where sixth place to 16th are within a second. 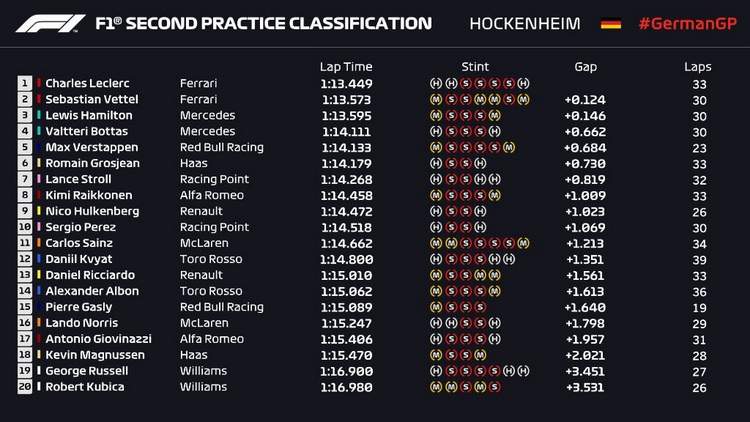