Haas: We ran two specs of car now we need to see what is what 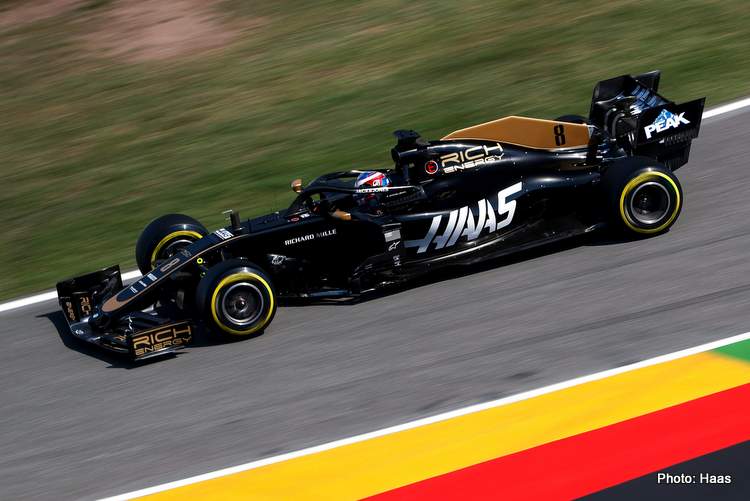 Rich Energy Haas F1 Team drivers Romain Grosjean and Kevin Magnussen are used dual aero specs on their respective VF-19 racecars this weekend, Grosjean reverting to the spec he opened the season with at Melbourne while Magnussen is carrying on with the most recent spec.

Both drivers commenced FP1 on the Pirelli P Zero Yellow medium tire before finishing the session on Red softs. Grosjean turned the eighth-fastest lap of 1:15.074 on softs on his 17th of 30 laps completed during the session.

Magnussen, who stopped on track during his initial out lap with a sensor issue that was quickly resolved, was five spots back on the timesheet with the 13th-fastest lap of 1:15.759 on his eighth of 27 laps during the session, also on softs.

Speeds improved marginally in FP2 for both Haas F1 drivers despite the season’s hottest temperatures surpassing 38 degrees Celsius (100 degrees Fahrenheit). After transitioning from his initial new set of White hard tires to Red softs, Grosjean turned the sixth-best lap of 1:14.179 on his 14th of 33 laps. He finished his session with a high-fuel run, first on soft, then hard rubber.

Magnussen started out FP2 on mediums, then took on softs, on which he turned the 18th-fastest tour of 1:15.470 on his 13th of 28 laps. He also closed with a high-fuel run, starting on the soft compound followed by a switch to mediums.

Romain Grosjean: “It’s been a good day. I’m generally happy with the car – and have been since the first lap this morning. It was quite exciting to see the lap time in the afternoon being so close to the mix with Bottas and Verstappen.

“Maybe when qualifying time comes it could be a different story, but so far, I’m very happy. We’re evaluating a lot of things here. The long runs, I think we can work on that a little bit, we tried different things but didn’t quite get the right direction.

Kevin Magnussen: “It’s been a little bit of a confusing day. We’ll see what we can learn in the data tonight, and then make a decision about what we’re going to do for tomorrow. We didn’t have grip today, overall it just wasn’t performing well.

“I don’t want to make any conclusions yet, but the upgrades didn’t work immediately. I can’t go back to Romain’s (Grosjean) car this weekend, which is a little bit of a bummer, but we also need to learn, and that’s the work I’m doing – we’re continuing the development. I haven’t seen the forecast but I’m hoping for some crazy weather.”

Guenther Steiner: “It’s been quite a good Friday for us, even if the temperatures will be completely different on Sunday for the race. I think we learned a lot today. We had two cars running almost faultlessly, except for Kevin (Magnussen) in FP1, when he had a sensor go down. All-in-all, a good effort from the team as we ran two specs of car. Now we need to dig into the data and see what is what here.”