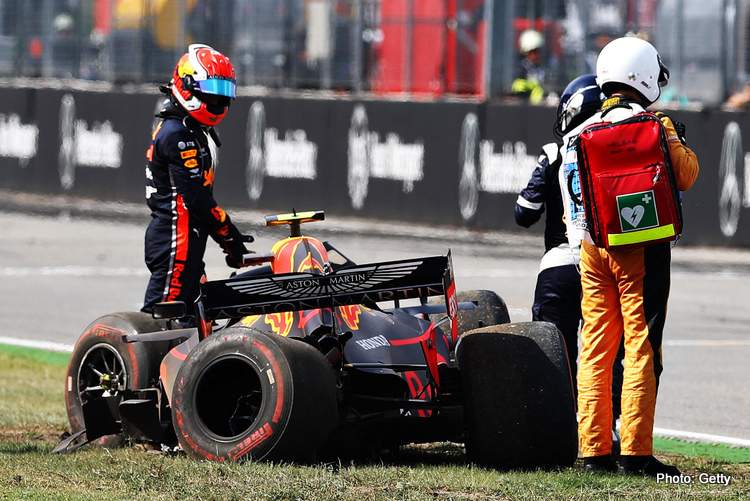 Pressure ramped up even further on Pierre Gasly as he crashed heavily in the final stages of the second free practice session of the German Grand Prix weekend on a very hot day at Hockenheim.

Replays showed the Red Bull snap out of control through the final corner, which speared him off onto the run-off and smashing to s a stop in the barriers.

Gasly confirmed he was ok, but his plight in the top flight just got more precarious as he is under pressure to raise his game which has not quite got going since he stepped into the energy drinks senior team.

The session was red-flagged to clear the wrecked Red Bull while Gasly was picked up by the medical car and checked at the circuit medical centre before returning to his team’s complex to avoid media.

Christian Horner told reporters that the impact registered 10G. At time of writing it was not sure if the crash was a result of driver error or breakage on the RB15.

The Frenchman wrote in his end of day report: “Unfortunately, towards the end of the session, I lost the car exiting the final corner during a long run and hit the barrier.

“Fortunately I wasn’t using my race engine or gearbox, but more importantly I’m really sorry for the boys in the garage and I want to apologise to them as the repairs will make for a long night.”

A dramatic ending to day one in Germany for Pierre Gasly 💥#F1 #GermanGP 🇩🇪 pic.twitter.com/PK8dQDvptd