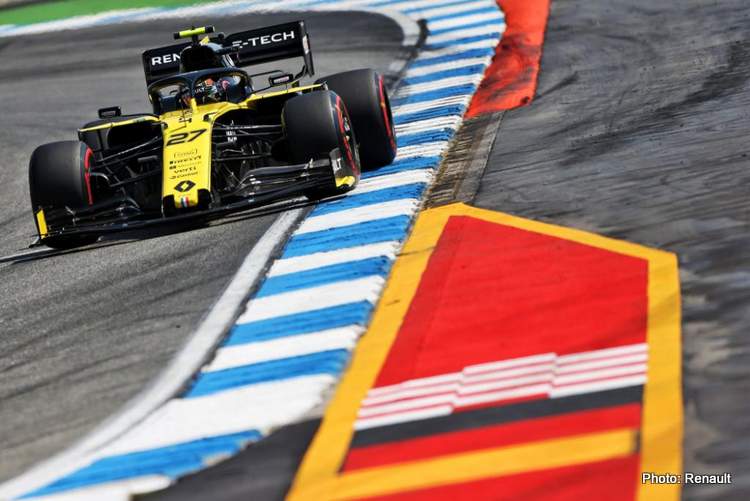 Renault F1 Team began preparations for the German Grand Prix on Friday with a solid day’s practice at a sweltering Hockenheim.

On home turf, Nico Hülkenberg recorded the ninth fastest time of the day set in Free Practice 2 with team-mate Daniel Ricciardo in thirteenth.

Throughout the day, temperatures at Hockenheim soared well above 35C making today’s running particularly challenging for both driver and machine.

Conditions are expected to cool through the weekend with rain a possibility for qualifying and race.

“It’s been a productive Friday for us. Obviously, it was very challenging with the heat, which made things tricky for the car, drivers, mechanics and the tyres. Managing the tyres was a big subject today, but all in all, it’s not been a bad day. The midfield looks close again with a lot of cars in there. We need a good effort tomorrow to be at the front of that. I wouldn’t mind some rain tomorrow, that would make it interesting around here!”

“We put in plenty of laps today, so no complaints there. We have a bit of lap time to find, but we’ll try and figure it out tonight. We won’t stress too much as the weather and temperatures look like they’ll change for the rest of the weekend. Physically, it wasn’t too bad out there, it was certainly hot and quite hard at the wheel but I quite enjoy that! It was tricky making the tyres last and the grip didn’t feel great, but that’s the same for everyone.”

Alan Permane, Sporting Director: “It’s fair to say it’s an unusual situation here. Today was very hot, but over the next few days we’re expecting it to be cooler with a huge threat of rain. While we went through our normal work today, it might not be applicable if it does rain and we have to run a wet tyre. We made some compromises as a result of that today with one eye on it being wet. We don’t have any major concerns from today’s running, there’s time to find as always, but that’s the same for everyone on a Friday night. We’re looking forward to the rest of the weekend.”