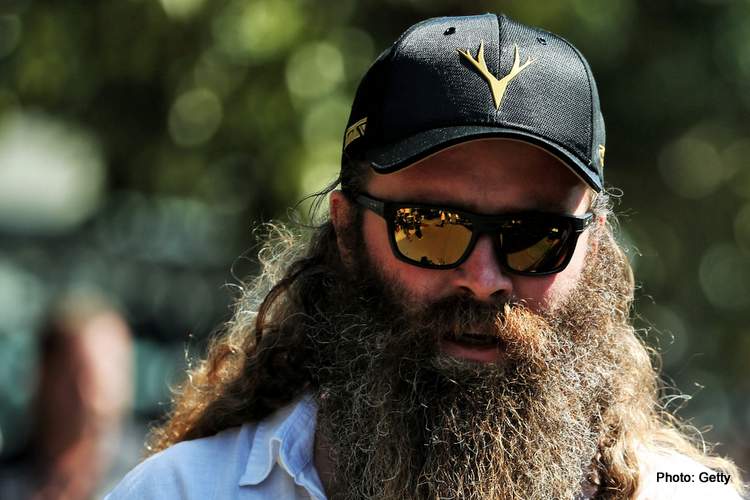 The whole Haas F1 team saga with title sponsor Rich Energy is a fiasco beyond anyone’s wildest imagination and inevitably raising a myriad of questions begging what is the endgame in this whole saga.

We have reported that Haas could loose north of $40-million of unpaid dues, some suggesting they have yet to see any money at all and now with the first instalment due the penny has finally dropped for the American team who are now set to sue for their money.

The Twitter gang-bang has been outrageous, to say the least, the belittlement and sheer mad tweets that rage from the account – allegedly run by Storey have won him or the company any friends. The latest one aimed at Red Bull is straight out the gutter of Trollville:

To be honest, this site has run out of words to keep on describing this never-ending soap-opera, but in a moment of good timing a reader who will pass as our latest deep throat (of sorts) popped this into our email box this monring:

“Thank you for continuing to provide timely and in-depth content on GrandPrix247. You seem to have content no one else has (that is until they copy it from your site!!!).

“I’ve been following the Rich Energy – Haas F1 saga with interest. Some time ago I told another F1 correspondent that Haas needed to distance themselves from Rich Energy as quickly as possible.”

So here goes for some GP247 community reporting:

Now that Rich Energy seems to have imploded quite dramatically, in a manner that has become an embarrassment for the Haas F1 team, and its effect on morale cannot be underestimated.

Which leaves us with some thoughts to be considered.

From the outset, many questions have been asked about the Rich Energy sponsorship, especially in respect of what due diligence was conducted on Rich Energy and William Storey, prior to Haas F1 signing the sponsorship agreement.

Consider that the Haas F1 sponsorship with Rich Energy was announced on 25 Oct. 2018.

It appears the Whyte Bikes v Rich Energy copyright infringement lawsuit was in full flight prior to and at the time of the Haas F1 sponsorship announcement. In her decision dated 14 May, 2019, Her Honour Judge Melissa Clarke makes reference to the issues to be determined at trial as coming “from His Honour Judge Hacon’s list of issues compiled at the Case Management Conference on 1 May 2018.”

It is not unusual in litigation that suits are commenced, pleadings exchanged and then a protracted period of discovery ensues which delays the actual trial date for many months or years depending on the complexity of the case.

Of more concern as relates to due diligence, is the court decision dated 27 July 2018 related to the Force India F1 Team bankruptcy. The written opinion seems to indicate that the “investment” by Rich Energy in the Force India F1 team, was in fact a sponsorship agreement for a total of $30 million.

The Honourable Mr. Justice Barling notes in his decision that although a sponsorship agreement for $30 million had been signed between Force India and Rich Energy, with the money to be payable on execution of the agreement, the money never arrived!!

The judge ultimately ruled that the $30 million was not sufficient to pull Force India out of bankruptcy so there was never any further discussion as to the delivery of the money associated with the Rich Energy “sponsorship.”

While this is permitted since Rich Energy was considered a small company under UK law, a quick read of the balance sheet filed for 30 Sept 2017 raises questions as to exactly how it was determined the company had the financial power to fulfil a reported $44 million sponsorship?

Possibly additional financial information relating to Rich Energy or M. Storey was made available to the party conducting the due diligence review but it is well settled that those who rely on unaudited financial statements for major commercial undertakings, typically do so at their peril.

Haas F1 has continued to display permitted Rich Energy branding to date if for no other reason than to continue to carry out their duties under the sponsorship contract to reduce the chances for countersuit for breach should they later bring their own action against Rich Energy/Lightning Volt, Ltd. for breach of contract.

They now appear to have legal representation by the Ebury Partnership based on letters to Neville Weston, a shareholder in Rich Energy, and to Rich Energy for the attention of William Storey, posted by Rich Energy on Twitter.

Mr. Courtenay-Stamp does have prior experience in commercial matters related to F1 and was reported to have been the head of MacFarlanes’ Formula 1 practice.

However, even a solicitor with Mr. Courtenay-Stamp’s experience may have a tough time obtaining redress for Haas F1. The ever-growing factors arguing against any recovery include:

So what remains are a number of ancillary questions:

Hopefully, Haas F1 are properly protected by appropriate language in the sponsorship contract. Whether they will ever recover any money due under the sponsorship agreement is questionable.

Time to move on to more pressing and manageable issues especially as relates to their drivers.

Report submitted by a lawyer-reader who wrote: Feel free to credit “deep throat”