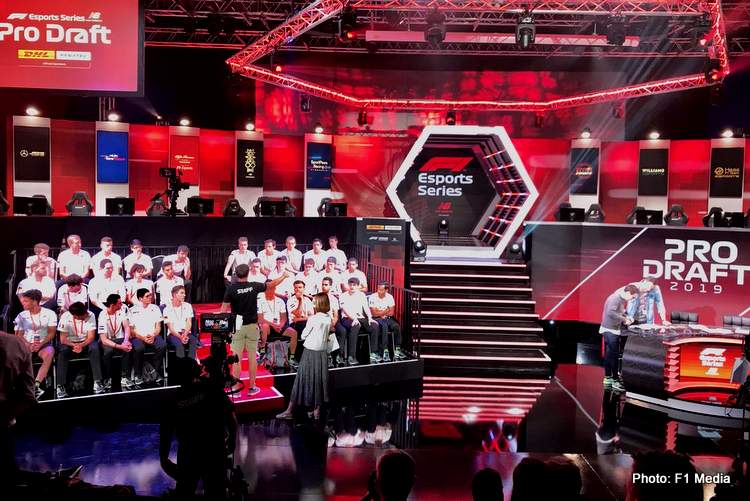 Formula 1, the pinnacle of motorsport, has revealed the names of the 10 talented racers selected at this evening’s Pro Draft.

They will now sign a contract to become official F1 Esports drivers and race professionally for a team in the next stage of the 2019 Formula 1 New Balance Esports Series – the Pro Series.

Following an evening of dramatic, adrenaline-fuelled racing, the ten drivers fought off stiff competition to secure their place on a team. A significant achievement given the record-breaking 109,000 participants from across the globe that competed in this year’s qualification stages.

The 41 gamers that had qualified for the F1 Esports Series Pro Draft participated in a series of nail-biting race-offs to identify the most skilled and talented. Through this process the 11 slowest drivers were eliminated and the fastest progressed through to this evening’s live event for the chance to compete for one of the coveted seats on an official F1 Team.

The live event was streamed online on Facebook, YouTube and Twitch, and broadcast live on global television by marquee broadcast partners.

As last years winners, Mercedes had the last pick in this year’s draft, with new joiners to the series, Ferrari Driver Academy, getting the first choice.

Here’s our rapid 🔟 who were selected 👇 pic.twitter.com/clNjvrwDEV

The successful drivers will now join their official teams to prepare for the 2019 Formula 1 New Balance Esports Pro Series, which will comprise of twelve races contested over four live events.

These will take place on 11 September, 2 October and 6 November and culminate at the Grand Finale on 4 December.

The Pro Series will see drivers compete for a share of an incredible $500,000 prize fund – more than double that of last year’s – on F1 2019, the newly launched official F1 videogame by Codemasters. These races will determine the 2019 F1 New Balance Esports Series Teams’ and Drivers’ World Champions.

Due to the significant increase in interest of the F1 New Balance Esports Series, for those who missed out this year, qualifying rounds for the 2020 Series will launch early for the very first time, officially opening on 22 July 2019 and running until the end of the calendar year.

Anyone with a copy of F1 2019, the official F1 videogame developed by Codemasters can take part. The qualifications are open globally and there will be five different qualifying rounds between July and November. For more information visit: www.f1esports.com.

Julian Tan, Head of Growth & Esports at Formula, 1 said: “The F1 Esports Series Pro Draft is an incredibly important part of our effort to break down borders and open up our sport to a new generation of F1 fans.

“Being the first in motorsport to pioneer the pro draft concept has allowed us to establish a direct route into our sport for fans, giving the next crop of racing stars the opportunity to go from living room to podium and even World Champion by signing for an official F1 team.

“Tonight’s successful drivers are incredible talents and if the wheelto-wheel racing is anything like last year, it’s going to be a thrilling championship!” Frank Sagnier, CEO at Codemasters, said:

“Tonight, we witnessed the world’s top F1 Esports drivers fulfil their dream and sign with one of the 10 official racing teams. We saw record numbers of participants attempt to qualify for the Draft and we are now down to the very best F1 Esports talent. The line-up is complete; it’s now time for the competition to begin and to see who can step up and take Brendon Leigh’s crown.”

Graham Wallace – Global Chief Operating Officer at Gfinity plc, said: “Once again the F1 Esports Pro Draft delivered the drama and excitement that fans demand. They love the back stories, where the drivers come from and their motivations. It gives them an added reason to care.

“And heightens the anticipation for the races themselves. The fans can’t wait to see the teams and driver compete under the lights at the Gfinity Arena. This year’s Series will be the best ever.”

McLaren Shadow driver Allert van der Wal reckons he can give @LandoNorris some advice – not the other way round 😏😅#F1Esports pic.twitter.com/r4zt3Qz5tV