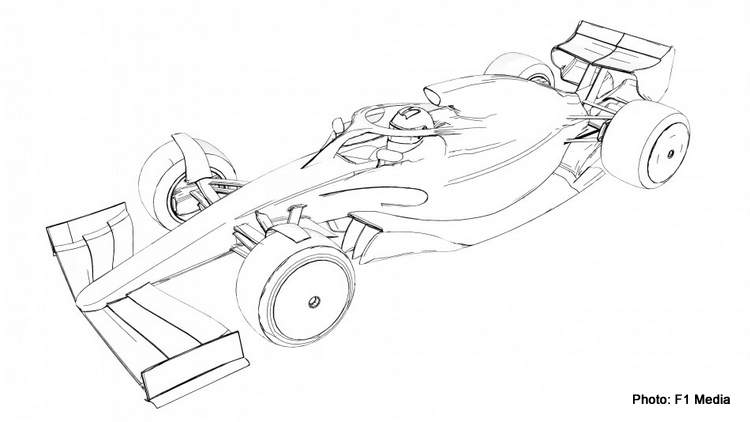 Following the June decision to further refine the 2021 FIA Formula One World Championship regulations ahead of a new presentation date at the end of October when the World Motor Sport Council will vote, the FIA and Formula 1 have this week revealed the most detailed vision yet of how the sport will change in 2021 and how the sport will achieve closer racing, a more competitive grid and a sustainable future for the pinnacle of motorsport.

The Aerodynamics of closer racing

For some time drivers have faced difficulties in following or attacking a rival car, an issue that stems from the aerodynamic characteristics of current Formula 1 cars. In recent years, team aerodynamicists have become adept at channelling airflow outboard of the car, thus creating a large, disruptive wake of ‘dirty’ air behind the car.

The aerodynamic regulations for 2021 are designed to address this by generating downforce in different way to current cars.

In place of the complex front wings and bargeboards, Formula One will pursue a ‘ground effect’ solution that will see downforce generated underneath the car, as FIA Head of Single-Seater Technical Matters, Nikolas Tombazis, explains.

“There’s a diffuser going right under the car, with a Venturi-type channel running through it. The tunnels go right from the front to the back,” he says. “[With the 2021 car] typically, we will go from about a 50% loss of downforce for the following car at two car distances [in 2017] to about a 5-10% loss. So we have a massive reduction of the loss of downforce for the following car.”

The Venturi tunnels will feed air back to a much higher diffuser than on current cars, and allied to other conditioning elements, such as the front wheel arch, the wake generated by a leading car will be narrower and higher, allowing following cars to stay closer for longer in ‘cleaner’ air.

“The two strong vortices we are creating take a lot of the wheel wake up and over the car behind. As a result what the car behind sees is much cleaner flow,” says Tombazis.

One element still under discussion is the final specification of the front wing. “There is further work going on with the front wing,” says Tombazis. “We are still not completely happy with it, both from an aero point of view and from an aesthetic point of view, so we are trying to make it better in both aspects. There are good reasons why the current wing is very wide aerodynamically, but it is not the best aesthetic result, so there is work going on there.” 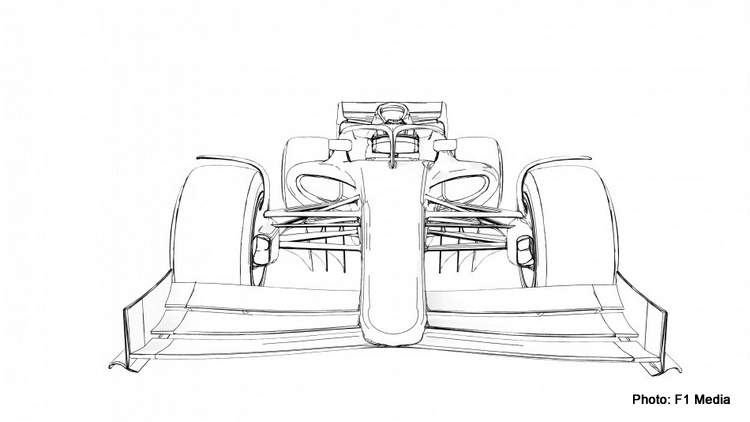 Getting a grip on tyres

The tyres on offer to teams from 2021 onwards will also be subject to the same sweeping changes. Chief among the alterations is the already announced move from 13-inch to18-inch rubber.

“We are into a deep consultation with Pirelli about how to be in a position where [the tyres] enable people to race and don’t degrade or force people to manage so much,” explains Tombazis. “They will need a broader working range and will not be as sensitive as the current tyres. We have understood jointly quite a lot of things that will make a significant difference in that respect.”

Pat Symonds, Chief Technical Officer at Formula 1 adds that altering the characteristics of the tyres will be a key component in creating closer racing, although he says that requesting Pirelli to produce a super-hard, “Le Mans-type tyre that will go on and on and on” is not part of the plan.

“The high degradation target is not the way to go,” he said, “however, we do believe that pit stops are important in F1 and we know our fans enjoy these two-second stops. Some of the teams are going to help us with this task through simulation.”

Another benefit of the move to 18-inch wheels is that understanding the deformation of the current tyres under load has been the subject of substantial and costly research and development by teams and that moving to lower profile 18-inch tyres that deform less that avenue of research for teams will be significantly narrowed.

Additionally, it is proposed that tyres blankets be outlawed for 2021 and beyond.

At last weekend’s British Grand Prix, Valtteri Bottas’ pole time in qualifying was over three seconds faster than Robert Kubica’s P20 time – and Formula 1 Managing Director of Motorsport Ross Brawn is candid that the performance gap between teams is too great. A key objective is to tighten the field up in 2021 by a nominal factor of around half.

“We have three teams that can win races at the moment, that’s all,” says Brawn. “Over the next couple of years, Formula 1 will be on a much better path… where a really good, moderately-funded team, can cause a lot of trouble. That’s what we want. If you get a Charles Leclerc or a Max Verstappen in a midfield team, it can make a difference.”

To close up the grid, in tandem with the spending restriction being put in place for 2021, the FIA and Formula 1 propose to simplify a range of car systems and parts in order to reduce cost and allow smaller teams to target resource more effectively.

Among these items are a simplified fuel system, less complex and longer lasting radiators, standardised wheel rims, a standardised brake system, a ban on hydraulic suspension systems, a restriction on the use of certain exotic materials, standardised pit equipment for all teams, and a freeze of gearbox specification for five years.

“All of these are technical and sporting regulations which, on top of the financial regulations, will in themselves create a significant cost reduction,” says Tombazis.

Additionally, cost controls are set to be put in place to limit the size of teams, with the goal again to stop the big teams dominating the smaller ones via superior resources.

“The great teams will still be the great teams,” says Brawn. “But in all the marginal gains that they do where they have 10 people on a project instead of two, which brings 5% more performance – they won’t do that anymore. They can’t, or if they do, they’ll be losing out in other areas where perhaps they could perhaps be making better gains.”

A radical change in regulations invariably brings with it opportunities teams seek to take advantage of, but for 2021 Formula 1 and the FIA are seeking to ‘stress-test’ the regulations with the technical team at Formula 1 looking at how rules could be exploited.

“There is work going on to ‘break the rules’,” says Tombazis. “Our colleagues at F1 have put a different hat on and rather than being a rule maker they are actually acting like an aerodynamicist in a team to see how much they can stretch the rules. It’s an opportunity to really try to push [the regulations] to the extreme to see if certain [exploitable] areas may emerge from the rules, either as loopholes or unintended consequences. Clearly, if we have the opportunity to do this ourselves it means we may avoid certain rules that might otherwise create problems later on.”

Brawn added: “The group that we have at FOM is not going to stop work at the end when the rules are issued. That group is going to carry on working, so as we see the team’s solutions evolve, we’ll analyse those solutions and understand if they are starting to negate the objectives so we can steer it back again. We are going to monitor and develop and tune the solutions constantly to make sure that we maintain these objectives.”

The progress towards the biggest change in Formula One regulations for many decades has been significant, and over the next two months more meetings involving all stakeholders will take place to further fine-tune the regulations before the October deadline.

At the head of that agenda is the discussion around placing more responsibility for race management in the hands of drivers, via a possible reduction in car electronics, the limiting of driver aids and restrictions around car-to-pit telemetry.

Talks are ongoing, too, on further standardisation of components that add little to the show and simplification of the lower part of the chassis.

Drivers will also play their part, and after a first meeting to hear the thoughts of the men behind the wheel, Brawn said more consultation will take place.

“The first meeting that we had was very good and the drivers stood as a group,” he says. “Drivers come under pressure from their own teams to take a position and that means that they’re just another voice in the same direction. [But] when the drivers stand and give us their own views, as a drivers’ group, the GPDA [Grand Prix Drivers’ Association], that’s really helpful and constructive.”

The outcome, in October, will change the course of the FIA Formula One World Championship and for Brawn that is an exciting prospect.

“Our objective is to make F1 more entertaining, more accessible, more sustainable – from a commercial perspective not just an environmental one,” he concludes. “There’s a lot going on, and it won’t stop. It will continue, and this is the new philosophy of where we will take Formula One.”