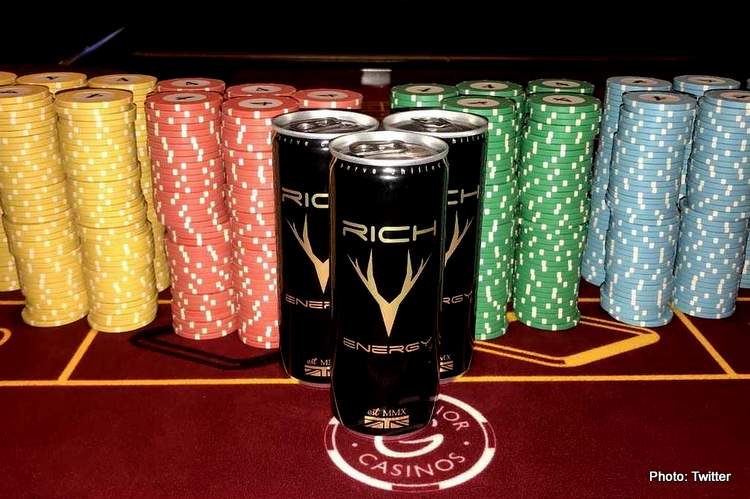 In the ten years of editing this site I have never witnessed a soap opera of the magnitude of the Rich Energy saga, whatever Williams Storey’s end game is I am not sure but let’s be honest the guy has leveraged some massive coverage for his dubious empire but at the same time may cost Haas F1 Team a bundle of money.

Storey has turned his empty tin can business into a household name and a talking point that has the F1 world fired up. Our #MsportXtra Network has been buzzing about it as this week things reached a crescendo, the common consensus is that “you couldn’t make this sh!t up.”

In another turn towards the ever more bizarre, it appears Rich Energy is no more and instead we have Volt Energy replacing the controversial brand that also happens to be the black and gold title sponsor of the Haas F1 team.

Begging the question: is this the end of the Storey story?

While Storey has been very high profile, several reports suggest that Haas have not been quiet on the matter as behind-the-scenes they have allegedly lobbied for his removal Rich Energy frontman or sue him and the company for compensation of unpaid fees and additional payments still due which reportedly amount to £35-million ($43-million).

William Storey founder of @rich_energy has sold his majority stake in the legal entity of Rich Energy Ltd to a third party. This was in disgust at conduct of duplicitous minority stakeholders. In the words of @Schwarzenegger he’ll be back!#richenergy #F1 #nobull #williamstorey pic.twitter.com/wvjRBAIqx9

While one would have expected Haas to do due diligence investigation on a title sponsor with such dodgy credentials and mysteriously rare inventory, it might well be that they did not and now that payment is required – Storey is supposedly a guarantor for the due amount.

At Silverstone, when this came to the fore, team boss Guenther Steiner was revealing little, “There is a clear line between them paying us for advertising and us doing our job. I don’t think we are damaged as a team, because as a company Haas has done nothing wrong.

“We have not done anything wrong, we have done everything by the book, so actually it gives us a good reputation because we didn’t react because we cannot,” added Steiner

Menaheil here is a timeline snapshot of this Rich Energy marketing fiasco or, alternatively, corporate suicide on Twitter:

Rich Energy emerge as a potential buyer of beleaguered Force India, with Storey arriving on the scene and trumpeting: “There’s an awful lot of senior people in the sport who have seen our money.”

But this fell through because Lance Stroll’s piggy bank was bigger than Storey’s.

Of course the at the mention of money the Piranha pool went into a frenzy, with Williams apparently lobbying for the business which would have turned their cars black and gold.

But the money went to Haas – sensible decision as the American team was delivering way above its pay grade while Williams were in freefall to the bottom of the grid. A no brainer decision.

Although Colin Chapman is probably spinning in his grave, we all hailed the return of the iconic black and gold livery to the grid.

After a quiet spell things revved up at the launch of the new Haas car, with Storey declaring brazenly: “We are looking forward to taking on Red Bull, on and off the track. We feel that there is a little bit of apathy and hubris in the market place and we think that we have a real opportunity to beat them off the track.”

That was a bombshell of naivety that triggered the alarm bells. Sure there are many stupid people in F1, but taking on Red Bull with title sponsorship was hardly going to happen. Had this guy watched any F1 races?

Following a board meeting of Rich Energy Ltd chaired by CEO William Storey and in light of the treacherous conduct of minority stakeholders the exclusive rights to distribute @rich_energy have been transferred to another company. Mr Storey retains complete ownership #RichEnergy pic.twitter.com/TXC8v8zM0v

Things went from a joke to the absolutely ridiculous when Rich Energy went on the warpath with Whyte Bikes over the logo they clearly copied, adjudged so by a UK court of law. This triggered a jaw-dropping one-sided war-of-words with Storey laying into the credibility of Whyte Bikes and pointing to a June appeal that would “resolve everything” in favour of Rich Energy.

The court date came and went with Rich Energy losing and ordered to pay compensation, which has not been forthcoming to Whyte Bikes.

The judge also did Storey no favours when she discredited him as “not credibly and an unreliable” witness in his attempt to prove the stag logo was not a direct copy of the Whyte Bikes badge.

Ref OUR logo: @rich_energy created logo & registered it 4 years ago around the world. We own ALL trademarks.2 YEARS later a company @WhyteBikes who admitted they knew about us previously & who had no mark outrageously demanded money. We are confident of vindication #onyerbike #uk pic.twitter.com/gEWEUQJz2d

Let’s have some fun with Mr Storey… 😉 #WhosEverHeardOfWhyte

How about the RichEnergy Haas F1 team driver Romain Grosjean…? Pictured on 26th August 2014 on a LotusF1 Team demo-day.

Retweet if you’ve ever heard of us… 🤦‍♂️

Today the judgment was released in the claim brought by @WhyteBikes against us in respect of our stag logo. We are disappointed with the judgment & the findings of the judge which run counter to our submissions. We are considering all of our legal options including appeal pic.twitter.com/WVJl9Sc5nQ

Still, on the warpath, Storey admits that there are 90-million cans of Rich Energy out there but they are yet to be filled while finding the elusive beverage remained and remains a challenge. Where can F1 fans buy black and gold energy drinks?

The official Twitter remains proactive and abusive while ignoring the court order to remove the copied stag logo, and most recently shooting barbs at the underperforming American they back in the top flight.

The parody was now in full swing as a ‘civil’ war erupts between Rich Energy shareholders and Storey who had clearly annexed the company’s Twitter communication program and promptly announced the end of the sponsorship deal by citing the Haas team’s bad performances on track.

Disparaging Tweets were flung at the team and their drivers, while a change of leadership somehow managed to take control, oust Storey and launch the Volt Energy brand which has taken on immediate spoof dimensions as fans tuck into F1’s own version of Monty Python.

As it stands: Records filed at Companies House on Monday confirmed that Storey’s appointment as a director and Croatian colleague Zoran Terzic had been terminated. Furthermore, Storey was no longer “a person with significant control” of the company.

Storey has been replaced in that role by Matthew Kell, who has also been appointed a director. Documents say that Kell holds more than 75% of the shares of the company and that he is no longer “directly or indirectly” involved with the brand.

This one has not ended. Watch this space!

Lobbying for the removal of the CEO, largest shareholder & founder of your title partner is repudiatory breach @HaasF1Team. Mr Storey was also personal guarantor of the contract. It is like @rich_energy seeking to remove Gene Haas! Amidst the noise let’s get real. #richenergy pic.twitter.com/dHNPEzJflp

Just to disavow people of lies from @HaasF1Team please see below. @rich_energy terminated the agreement as we said. The team have accepted contrary to their public denial.They were complicit in trying to oust CEO William Storey who even gave them a £35m personal guarantee #truth pic.twitter.com/RZodxJd4js