Wickens: I’m over the moon with how crazy this is 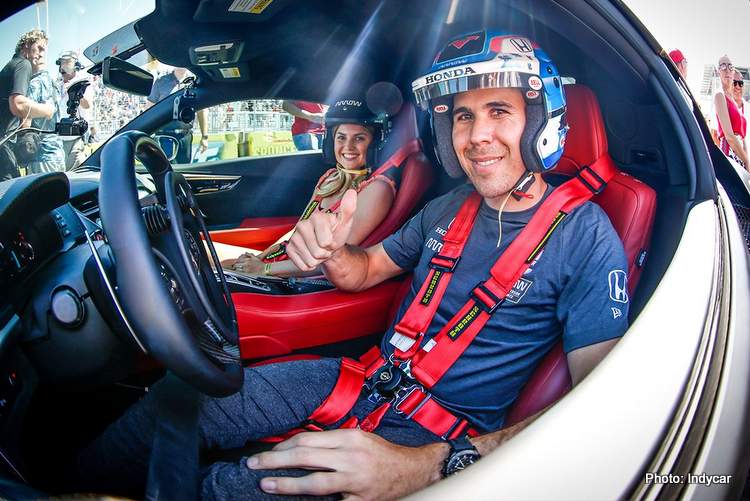 Robert Wickens’ beaming smile was all anyone needed to see to understand the significance of the moment they just witnessed after the injured NTT IndyCar series driver completed two parade laps with his fiancée Karli Woods as the passenger in an emotional and inspiring curtain-raiser to the 2019 Honda Indy Toronto.

With standing and jubilant hometown fans cheered him on, Wickens stopped at pit exit at the end of the first lap and gave a special command to the field — “Future drivers of mine, start your engines” – before heading off for another lap, going “as fast as Karli’s stomach would allow.”

It was all a dream come true.

The laps behind the wheel of a modified Arrow Acura NSX marked the start of another long journey for Wickens, whose ultimate goal is driving an Indy car in anger again.

Almost a year ago, an accident in the ABC Supply 500 at Pocono Raceway left Wickens paralyzed from the chest down. Once he was able to start rehabilitation, Wickens documented every small step forward – and even little one backwards – on his road to recovery that led to the laps in Toronto. His progress has been inspiring to watch.

Simon Pagenaud, who won the pole for this event, joined the crowd in lending his support to Wickens, insisting that the parade laps are only a taste of what’s to come.

“I’m ecstatic for him,” said the No. 22 DXC Technology Team Penske Chevrolet driver.

“I’ll tell you what: I think he’s an inspiration to everyone, and not just in the racing world. You see his strength mentally and he keeps a smile on his face every time you see him. I really admire that.”

Less than a year after his spinal cord injury, he and @ItsKarliWoods were in a hand-controlled car at the @HondaIndy Toronto. Join us on NBCSN: https://t.co/RVjHJMX1W3 pic.twitter.com/Q7lyWnmY5J