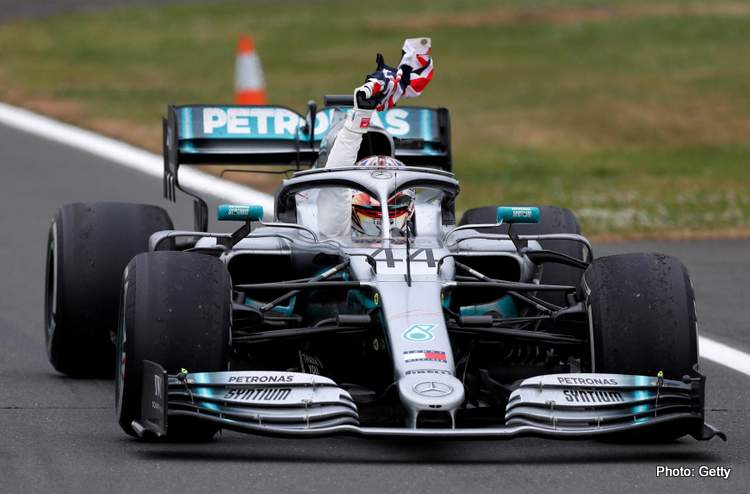 The #BritishGP had everything. From excitement to drama, from battles up and down the grid to a dominant win.

Hamilton was victorious for the 6th time on British soil as Bottas made it another Mercedes 1-2 while Leclerc rounded up the podium spots after having had a few fights along the way with Verstappen. Here are some of my thought on an action-packed Sunday at Silverstone.

What a race… A record sixth #BritishGP win for Hamilton, action throughout… and that Verstappen / Vettel clash.

Did Mercedes turn up the power?

On Friday, it didn’t seem as if Mercedes would dominate the weekend but when it mattered on Saturday, they were the head of the class with a front row lockout to start the race with. Bottas had the edge on Hamilton but when the lights went out, Hamilton was on the attack straight away. With a few hard but fun battles, Bottas kept his cool and his advantage.

After Bottas pitted, it was Hammertime for Lewis and a safetycar played right into his hands, meaning that, after he pitted, he kept the lead and ultimately took the win with Bottas making it a Mercedes 1-2 finish. It was Hamilton his 6th #BritishGP victory which takes him on top of the list and breaking yet another record.

A shift in lead at Ferrari ?

Ferrari showed up on Friday with a pretty fast car but they just couldn’t get the package to work. It was Leclerc that was the strongest of the two as he was faster than Vettel during FP1, FP2, FP3, Q1, Q2 and Q3. Leclerc started from 3rd on the grid while Vettel had to settle with 6th.

Right from the start, it became clear that Leclerc would have his hands full with Verstappen and Vettel seemed to have a chance with Gasly, who started in 5th. Lap after lap it was pure excitement to see the two young drivers Leclerc and Verstappen battling it out corner after corner.

None of them wanted to back out, which meant a few moments of contact but luckily this time, the stewards let them race. After the pitstops, the situation changed and Leclerc found himself behind Gasly in 6th so he had to fight back, which he did. At one point, Verstappen took Vettel for 3rd but the German driver tried a move that would never work and contact was inevitable.

Both Vettel and Verstappen ended up in the gravel-trap and although both managed to get out and continue, Leclerc and Gasly were already ahead at this point. Vettel not only lost position to Verstappen but damage to his car meant an extra pitstop and lot of places lost. On top of that, stewards deemed him at fault for causing a collision and he received a 10 second time penalty.

While Verstappen made the finish in 5th, Vettel came home in 15th but with his penalty, was classified as 17th. It was clear that Leclerc had the upperhand all weekend and if this continues, it might just be that Leclerc gets the number 1 status within the team.

After a victory in Austria, on a different track with different temperatures, it was back to square one for the team from Milton Keynes. But the surprise came on Friday when Gasly was faster than Verstappen in both FP1 and FP2.

The story was that Gasly was running with the setup of Verstappen because he has been making so many big changes to the setup so far and nothing worked. True or not, Red Bull gave Gasly full power on the engine and it worked. Even in FP3, Gasly made it work and was again faster than Verstappen.

During qualifying, Verstappen was able to get a little bit more out of the car but Gasly wasn’t 0.6 or 0.8 seconds behind this time. Verstappen started in 4th and just 0.3 seconds behind, Gasly started in 5th. Although it could’ve been different at the finish line, hadn’t Vettel and Verstappen found themselves in the gravel-trap, Gasly came home in 4th.

Most importantly, both Red Bull cars showed tremendous race pace, equal on Mercedes which suggest the team and also Honda, are making good progress. I for one am curious what they can bring to Germany.

Is the midfield closing in?

I must say, in England they did. From start to finish, there was always something happening up and down the grid. Looking at the fact that 13 drivers ended up finishing on the same lap and that there were only 27.447 seconds between Sainz in P6 and Stroll in P13 really showed how close it was, even after 52 laps of racing.

Sainz was best of the rest with Ricciardo on his tail but there wasn’t really one team in the midfield that stood out because it was a McLaren in 6th, a Renault in 7th, a Alfa Romeo in 8th, a Toro Rosso in 9th, then another Renault, McLaren, Toro Rosso and Racing point. Let’s hope they all can get a bit closer to the front so that we as fans get to see even more action.

Has Haas lost the plot?

Even before the weekend started, Haas made the news but not in a positive way. Their title sponsor Rich Energy made an announcement on social media that they were pulling out, due to poor performances. This all snowballed and went from bad to worse.

Although the Haas team took the high-road and stayed professional in all of this, it must have affected their run-up to the #BritishGP.

Starting Friday, both Grosjean and Magnussen were between 1.5 and 2.5 seconds off the pace and were found at the back of the grid a lot.

Qualifying in 14th and 16th meant it would be a tough race but as soon as the race started, both teammates were next to each other after three corners and they made, what looked like, slight contact. It was enough though for both cars to retire. I’m sure Haas wants to forget this weekend as soon as possible and focus on Germany.

Getting back to the Rich Energy saga, we are not sure if Haas will keep this livery or not but it might be that this will turn into an ugly mess in which the American team is drawn. Hopefully, all will turn out on a positive note so the team can focus on what really matters and that’s their on track performance.

Racing Point not where it needs to be?

Racing Point have been invisible all weekend. Where Perez always seemed to be bringing something extra to start in the top 10 at Silverstone, he couldn’t this weekend. Stroll, again, was slower than his teammate and with Stroll starting in 18th and Perez in 15th,

it was going to be a tough race, no matter how you looked at it. Perez had a decent start but made a mistake, which cost him his front-wing so he had to pit early and that ruined his race as he ended P17. Stroll was invisible as always but managed to stay out of trouble to come home a colourless 13th.

Great race for the neutral but a disappointing day for us. So near, yet so far… 😪#MakeItCount #F1 #BritishGP pic.twitter.com/dn7SV9Xw3D

Are Williams slowly finding their way back?

Williams started the weekend with some great news. They announced an extension of their deal with ROKiT which means that they have a title sponsor till the end of 2023. This gave them some breathing room and it showed.

Of course, they are still fighting for P19 and P20 but more and more, they are there or there about during the start of the race and they can battle other cars. It doesn’t matter why, but they finished with Russell in P14 and Kubica in P15 which is a great result for them.

Even more because, together with Vettel and Perez, they were just 1 lap down on the winner. This might sound harsh but is in fact a good thing seeing where they started this season. Hopefully they can keep chipping away at it and make progress throughout the remaining 11 races.

George Russell “Seeing all the fans supporting us Brits was amazing.”

The first battle was a lot of fun to watch with both drivers going to the edge of what was possible while trying to gain a position on track. Leclerc seemed to have the upperhand but Verstappen didn’t let go and that produced a number of overtakes on both sides.

The latter didn’t quite turn out as planned as Verstappen was closing in on Vettel, the German wasn’t able to hold position as the young Dutchman made his way along the outside of the Ferrari. In doing so, Verstappen went a little wide and lost a tiny bit of momentum so Vettel could line up again.

As Vettel explained after the race, he thought Verstappen might go to the middle of the track to defend his position so that Vettel could launch one down the left side. Realising Verstappen stayed on the left, it didn’t give Vettel enough time to react and go right so he rear-ended Verstappen and both went off into the gravel.

The stewards had a look at it and blamed Vettel for causing a collision. There’s always the could’ve, would’ve, should’ve but the fact remains that Verstappen was gobsmacked to even reach the finish, let alone in 5th, as he questioned why it was possible that the car even made the finish after hitting the high kerb and letting the RB15 go airborn. Right after the race, Vettel came to Verstappen to apologize.

Max: “The whole floor and rear was destroyed”
Seb: “It was my mistake… I was too close…”#BritishGP 🇬🇧 #F1https://t.co/lI2o2Zlish

Social Media was a positive place to be!

Social media was a fun place to be during the #BritishGP. Unlike some races, there was a lot of activity, for all teams, throughout the race. Hamilton’s 6th #BritishGP win was obviously a big talking-point, as were both situations with Verstappen but McLaren got a lot of traffic and fans were happy to see “their” team climbing back to the top.

Renault, Toro Rosso and Williams all received praise while Racing Point were present amongst fans on social media, they didn’t dominate the Sunday. Haas also got a lot of attention, albeit in a negative way sadly (partly thanks to Rich Energy who kept sending the most ridiculous tweets)

All in all, it was a fun day at #MsportXtra HQ and I’m looking forward to Germany in 3 weeks time. Till then, stay safe and have fun.