Verstappen: Vettel apologised to me immediately 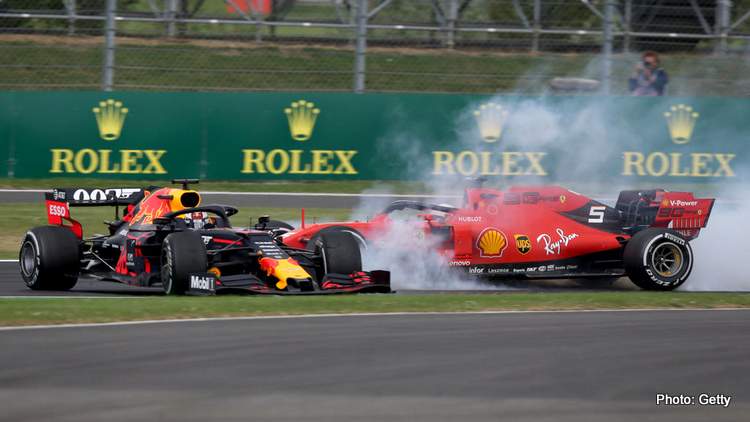 Ferrari’s Sebastian Vettel apologised to Red Bull rival Max Verstappen on Sunday for a collision that wrecked both of their British Grand Prix podium hopes.

The four-times F1 world champion, who won all his Formula One titles with Red Bull, accepted the blame for shunting the 21-year-old Dutch driver’s car from behind as they scrapped for third place on the 38th of 52 laps.

Stewards found Vettel wholly to blame for the incident and gave the German a 10-second time penalty as well as two penalty points.

Verstappen said he had been “rear-ended” through no fault of his own, “Here you can expect me to close the door when I’m ahead.”

And added, “I guess he misjudged his braking in there – but I already spoke to him, he apologised to me immediately out of the car, and that’s it. It’s disappointing but you can’t change it now.”

Cool and calm after another stellar performance ended by a stupid move by a rival – remember Esteban Ocon in Brazil? How markedly different the reaction half a year later.

The Dutchman added in the media pen, “The power steering more or less failed so it was quite a hard workout for me out there, the seat popped up so it was moving around a lot.”

“The diffuser was broken, the floor was broken, underneath I could see parts falling off. Was not great. The car was not what it should’ve been, [so I’m] still happy to be fifth.”

Red Bull team boss Christian Horner said the incident had “knocked Max off a guaranteed podium” with second place behind the Mercedes of race winner Lewis Hamilton a possibility.

“That was very frustrating. It was remarkable that the car held together. To keep going with the damage he had was quite incredible. At least he managed to finish the race and get some points out of it,” added Horner.

“He’d obviously made a great pass on Seb and I can only imagine it was a complete misjudgement by Seb to lock up and hit him the way he did.”

Vettel asked over the radio to the Ferrari pitwall: “What was he doing?”

But clearly, he realised the error of his ways by the end of the race and admitted, “My mistake. Obviously, [Max] is not happy but you know, life goes on.”

Nevertheless, Vettel, who is acquiring an increasingly accident-prone reputation and is now languishing 100 points behind Mercedes’s championship leader Lewis Hamilton after 10 races.

Verstappen, who cemented third place overall in the standings, had passed Vettel into Stowe but the German slammed into the Red Bull as they braked at Vale, sending both spinning into the gravel.

Vettel pitted for a new front wing, returning at the back of the field and ending up in 16th place, while Verstappen — winner in Austria two weeks ago — continued the race and finished fifth.

“I thought the inside (line) will open up, it didn’t open up. It looked for a second as if he was pulling for the middle of the track but then he stayed left and I was too close and I couldn’t avoid the crash,” said Vettel.

“Obviously I destroyed my race but the race in general was pretty good. I think we were quite sharp with the calls to stay out in the beginning and I think we managed the tyres well. The car felt good today,” acknowledged the German.