Hamilton: One of the best days I can remember having 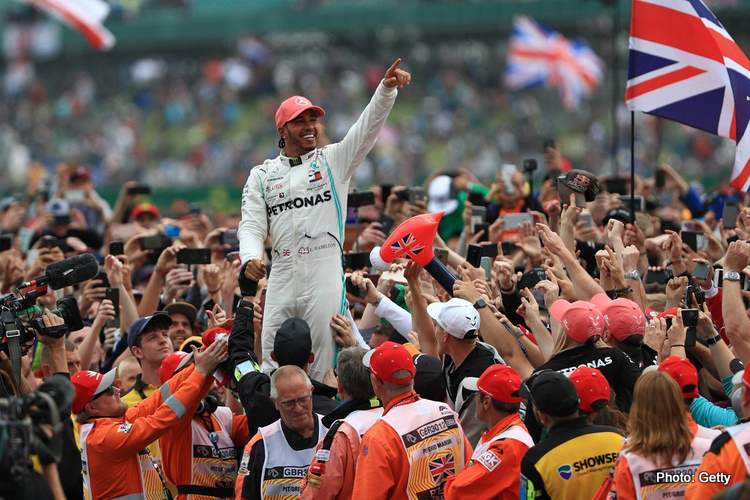 Formula 1 World Champion Lewis Hamilton wrote a new chapter in British Grand Prix history on Sunday with a record sixth home win at Silverstone which he ranked as one of the best and proudest days of his life.

With the Union Jack fluttering from his Mercedes after it was handed to him by a marshal on his victory lap, the five-times world champion basked in the adulation of a sellout 141,000-strong crowd.

“I cannot tell you how proud I am to be here today in front of my home crowd,” he told 2009 champion and compatriot Jenson Button in an interview conducted immediately after he had stepped out of the car.

“So many British flags out there; I could see them lap after lap. Every year I’ve been coming and I’ve seen it and noticed it and appreciated it.

“You would think you would get used to something like that but I’ll tell you, it feels like the first time.”

Hamilton has had to answer questions about his ‘Britishness’, and about why he polarises opinion in his home country, but the warmth of the crowd’s response left little doubt about his status at Silverstone.

As Mercedes team boss Toto Wolff said on Sunday, it is better to polarise than to be middle-of-the-road and Hamilton, from a mixed-race family and a background without privilege, has never been that.

“This is one of the best days I can remember having,” he said of his seventh win of the season and 80th of a career that has seen the 34-year-old push the boundaries of the sport year after year.

A winner in every year of his Formula One career since his debut in 2007, Hamilton has averaged 10 wins a season since the start of the V6 turbo hybrid era in 2014 and is on course to exceed that this year.

Until Sunday Hamilton had been tied with retired French champion Alain Prost and the late Scot Jim Clark on five British victories.

All of Hamilton’s have come at Silverstone, the windswept former airfield that hosted the first Formula One world championship race in 1950 and whose future as a venue was secured for the next five years only last week.

“This is the greatest single moment of any athlete in the world, to raise their flag as the number one or with the gold or whatever it may be in their home country,” he said.

“I was looking the whole time for a flag… because one day I’m going to be able to look back and I’ll have that picture of me in the car with that flag and I’ll always be able to smile until my dying day.”

Hamilton has never been a great one for statistics, often giving the impression he can barely remember how many races he has won or recall details from some of them, but Silverstone is special.

“Unless I stop and think about how many wins I have, I didn’t know if it was four or five or whatever it was here,” he said. “To then hear that I have six and to be up there with the greats…