Haas: The best our drivers could bring to the battle was a shovel 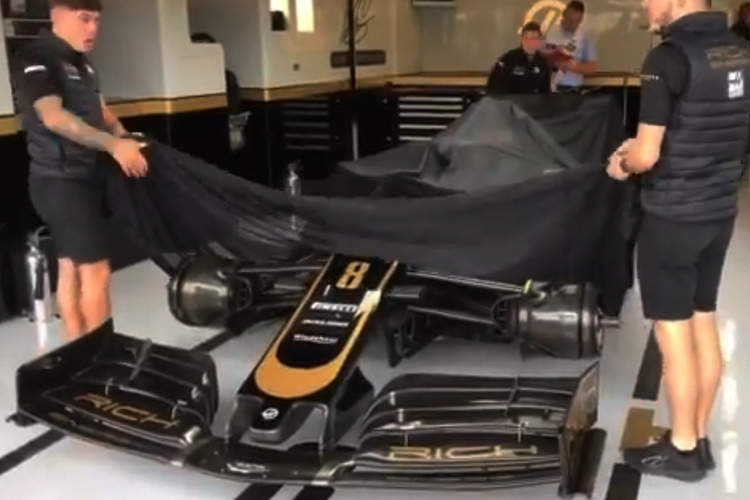 Grosjean was 14th and Magnussen 16th on the starting grid and launched cleanly. Magnussen pulled alongside to the right of Grosjean while the two were negotiating turn five and the two made side-by-side contact, both VF-19’s emerging with punctured rear tires.

Both pitted to change from their Pirelli P Zero Red soft tires for a set of White hards and resumed, Grosjean in 19th and Magnussen in 20th.

Magnussen was called back to the pits after six laps, Grosjean after nine – both retired to the garage with accident damage.

With today’s results, Rich Energy Haas F1 Team remained ninth in the constructor’s championship with 16 points, three behind eighth-place Toro Rosso and Racing Points and 16 ahead of 10th-place Williams.

The 2019 FIA Formula 1 World Championship resumes July 28 with the German Grand Prix at Hockenheimring in Hockenheim.

Romain Grosjean: “I picked up the rear right puncture. After the pit-stop the damage to the car, on the floor, the brake ducts and so on, it was too much to be able to carry on racing. We had to retire the car unfortunately. It’s a real shame. We wanted to evaluate both packages on the cars today. My car felt really good on the way to the grid, I was encouraged by those laps, and was hoping for a good race.”

Kevin Magnussen: “I think we had a decent weekend going for us, but obviously qualifying went worse than we expected. I think we’ve learned some things this weekend about the car, with the experiments we’ve tried. We didn’t get any result out of this today but hopefully we can take some learnings onto the next one.”

Guenther Steiner, Team Principal: “It was a very disappointing race for us. I’m just stating the obvious here. The best that our drivers could bring to the battle was a shovel – to dig the hole we’re in even deeper. We need to go back, regroup, and see what we do in future.”