Giovinazzi: Overall it was a good team performance 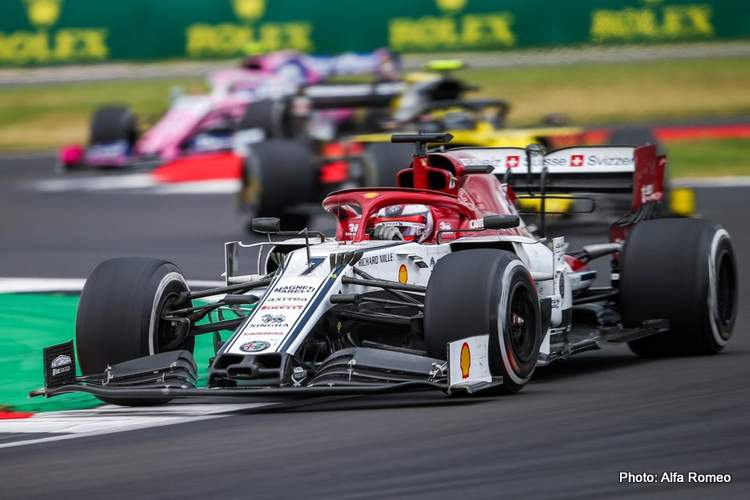 The British Grand Prix produced emotions, thrills and spills – not just from lights to flag, but also before the race even started.

As the drivers’ parade got underway, spectators – and the place was fantastically packed today – were treated to a special show. It’s not every day you get to see a car that wrote history, driven on a Grand Prix circuit by a World Champion: but that’s exactly what happened when Kimi Räikkönen got behind the wheel of our Alfetta.

“I really enjoyed driving the 1950 Alfetta,” said the Iceman. “It was a bit loud, I should have had worn some earplugs! But it was a great experience.” It sure was – the car started in a big puff of smoke, its roar filling the air, and off they went. Kimi pushed – he held nothing back.

The race had a similar theme. On one of the most historical tracks on the calendar, after driving the first race winning-car in the championship, the most experienced driver on the grid went on to produce a solid display, bringing home points for the third race in a row. The only blot on our copybook on an otherwise good weeknd was the DNF for Antonio due to a mechanical problem, but we can still be positive about another top ten finish and a fighting performance among the squabbling midfield.

Silverstone and its history. The Alfetta and its heritage. Kimi and his unmistakeable style. The British Grand Prix weekend was a thrilling one in a unique setting and with great characters – definitive proof that Old School still has got it.

Frédéric Vasseur, Team Principal: “Bringing home four points is a good result but it’s always a bit disappointing when one car doesn’t see the chequered flag. Overall it was a good team performance: Kimi drove a solid race and was able to make the most of the opportunities that came his way.

“Antonio would have been close to him, but unfortunately a mechanical issue meant his race ended in a gravel trap. Once again, we were able to fight in the midfield but we still need to work hard to retain the ground we made up.”

“P8 is a positive result. My car was handling quite nicely around the corners today, but we were lacking a bit of straight line speed. At the end I was fighting to keep the Toro Rosso of Kvyat behind by trying to stay in the DRS window of the car in front of me. It wasn’t the easiest weekend but we will happily take the points.”

“It is disappointing not to finish the race – something went wrong with the car and put me in the gravel but we don’t yet know what. We will investigate when the car is back. It’s unfortunate but it’s how racing goes. I was quite close to Kimi and we were on similar strategies, so I could have been in or close to the points, but we can still be pleased about our performance. We scored a good result for the team and we made another step forward. The midfield is very close so we need to keep working hard to remain there.