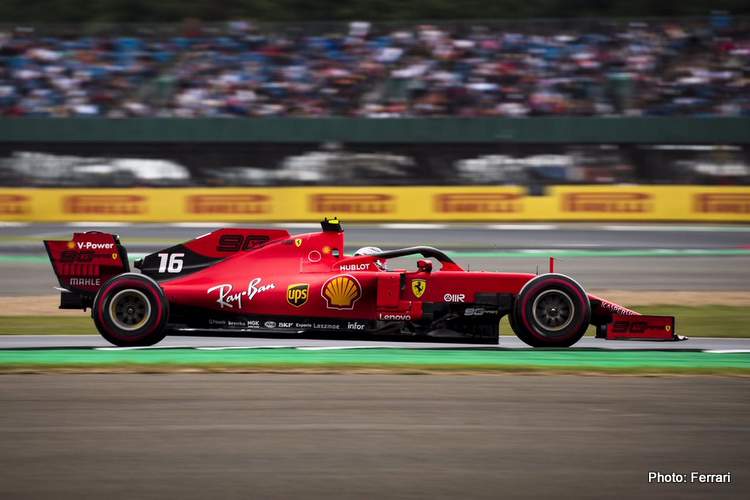 It was not an easy day for Scuderia Ferrari at the British Grand Prix. Charles Leclerc took the team’s ninth podium of the season at Silverstone but Sebastian Vettel finished outside the points, after he collided with Max Verstappen on lap 37.

Charles and Max. When the five red lights went out, Charles kept his third place, while Sebastian immediately passed Pierre Gasly to move up one. Then Max Verstappen closed on Charles and a exciting duel ensued over ten laps, as the two men passed and re-passed each other.

The battle even continued to rage after both men made their first pit stops on lap 13. Verstappen actually managed to come out of pit lane very slightly ahead of Leclerc, but the Monegasque didn’t give up and a few corners later, he got in front again, which had the crowd on their feet.

Safety Car period. On lap 20, Antonio Giovinazzi went off track and the race director invoked the Virtual Safety Car. Sebastian Vettel made the most of this, pitting to go from Soft to Hard tyres, rejoining in third place.

On the same lap, Verstappen made a second stop, which meant the Scuderia had to react, immediately calling in Charles again to switch him from the Mediums to the Hard. In the meantime, the real Safety Car had come out and the field closed up. Leclerc therefore found himself on the tail of Verstappen and Gasly in the Red Bulls. These two soon swapped places so that Charles was now following the Frenchman, whom he passed on lap 35 on the outside of the Loop corner.

Sebastian. Ahead of Charles, Verstappen had meanwhile closed on Sebastian. On lap 37, the Dutchman attacked the German down the Hangar Straight and went past. Vettel tried to respond at the next braking point, but the move went wrong and he ran into the back of the Red Bull. Verstappen managed to keep going, losing a few seconds, but Sebastian had to pit to change the front wing.

The German was deemed to have caused the collision and given a 10 second penalty, added to his final race time, which dropped him to sixteenth.

Podium. The incident between Vettel and Verstappen promoted Charles to third place behind Lewis Hamilton and Valtteri Bottas. The Monegasque was voted “Driver of the Day” after taking his fifth podium of the season, the fourth in a row, after finishing third in Canada and France and second in Austria.

Next race. The Formula 1 World Championship is back in action in a fortnight’s time with the German Grand Prix at Hockenheim.

Charles Leclerc: “It was a good day for me. This was by far the most fun race of my Formula 1 career to date. From inside the cockpit, the duel with Max was really enjoyable and I reckon those watching it at home or at the track also thought it was a good show.

“In a way, I have to say that what happened in Austria allowed me to understand how aggressive I can be in the race and I didn’t hold back. It was also a good fight with Pierre: to overtake him I had to be daring because he was very quick down the straights.

“From a technical point of view, I think we need to further improve our race pace and how we manage the tyres, because today we struggled a bit.”

Sebastian Vettel: “Regarding the incident with Max, it was my mistake and I spoke to him afterwards and apologized. I had thought a gap would open up on the inside but it didn’t and it looked for a second as if he was pulling into the middle but he stayed left, but by that time it was already too late, I was too close and I couldn’t avoid the crash.

“Ferrari and Red Bull have been very closely matched in the last few races and I think it would have been difficult to fight Max off anyway.

“Apart from that, our race pace was really good, and the initial laps went well and I benefited from the Safety Car to get ahead of three cars. I don’t think we could have won today, but I’m not happy that I didn’t even score any points.”

Mattia Binotto Team Principal: “It was definitely a difficult race, when compared to yesterday’s qualifying. Once again today, tyre wear compromised our pace, limiting our performance. It clearly demonstrates we still have work to do to close the gap when we are racing in specific circumstances.

“Charles drove a strong race and showed once again how good he is in a wheel to wheel situation. It was a shame that Seb’s good showing in the race was spoilt by a mistake when fighting Verstappen.

“The Safety Car made Charles’ race more difficult; stopping first was not really an option as it would have put Charles behind his rivals. All we could do therefore was react when Verstappen pitted. In the end, Charles had to attack the Red Bull again on track, which he succeeded in doing to take a well-deserved podium.”