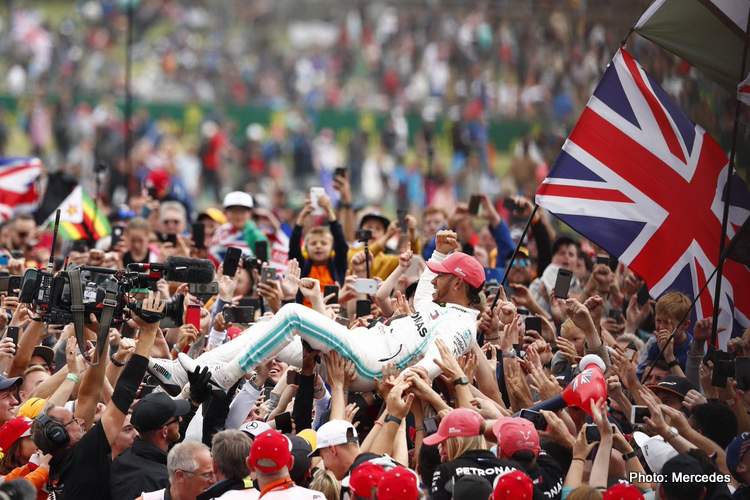 Lewis Hamilton powered to a record sixth British Grand Prix victory on Sunday, the Briton sending home fans into raptures as he crossed the line for another victory in which only his teammate Valtteri Bottas provided a hint of resistance but appeared to lose interest as the afternoon dragged on. 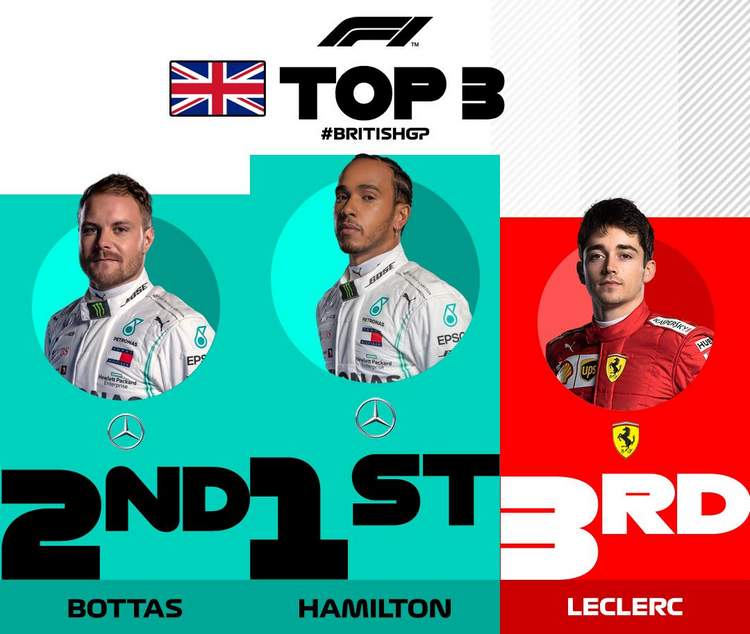 But the real story was behind the silver pair as Ferrari duo Charles Leclerc and Sebastian Vettel crossed swords with Red Bull’s Max Verstappen in a contest that has too many jaw-dropping replays to describe.

Toe-to-toe, no-holds-barred, whatever, the cliche applies as we were treated to a ‘Race-of-Races’ within a riveting race. Inevitably there were tears when Vettel rammed Verstappen out as the pair battled for the final podium spot.

Vettel clearly to blame was handed a 10-second penalty and ruined an afternoon in which Verstappen was stellar in his duel with Leclerc, the Dutchman proper and mature amid some dubious defensive moves by the #16 and then the same with the German who plunged into him in a mounting catalogue of brain-fade errors by the four-time F1 World Champion.

In the end, Leclerc was third and shared the podium with the drivers in silver – the Monegasque voted Driver of the Day for his efforts, while Verstappen recovered to finish fifth, with Vettel a pointless 16th thanks to his shenanigans.

But after the dust has settled, among the Big Three teams it remains clear that Austria two weeks ago was a blip on the Mercedes juggernaut as Hamilton not only won the race but got the point for the fastest lap with his effort on 32 laps old tyres on the final lap.

Credit to the team for allowing the pair to slug it out so early in proceedings the pair swapping positions for the lead was a sight to behold, that the duel it fizzled out was a shame but clearly when it matters Hamilton has the edge over Bottas.

The five-time F1 World Champion told MC Jenson Button on the grid: “I can’t tell you how proud I am to be here. You think you’d get used to something like that, but it feels like the first time.”

“I couldn’t have done it without these guys [the fans] and my team. Everyone back at the factory and everyone is supportive of them. I value them massively and super proud to be a part of this,” added Hamilton after his 80th grand prix victory.

Bottas would be forgiven to lament his lack of luck, when things go wrong it tends to be on his side of the garage. and said of a race he might have won: “Not really my day, but at least the pace was good and I felt good out there. I will keep fighting, it’s not over yet.”

Third-placed Leclerc summed up his afternoon: “It’s probably the race I enjoyed the most in my F1 career. It’s great to finish third but today was very difficult. We were where we wanted to be in the first two stints, but the safety car meant we lost a couple of positions and I’m extremely proud of the battles we had on track.”

“I think the last race was an eye-opener for me showing me how far we can go and it’s great for F1 to fight on the limit in that way and I’m happy that this race has gone that way,” added the Ferrari driver.

Pierre Gasly was more an observer than an interloper in the drama all around him and stayed out of trouble to finish fourth, ahead of teammate Verstappen who recovered to finish fifth.

Inevitably the abovementioned duels hogged the airtime, but the battle for Best of Rest was also riveting stuff, with Carlos Sainz surviving to finish sixth, ahead of Daniel Ricciardo in the Renault.

Kimi Raikkonen finished eighth for Alfa Romeo, some consolation for the team whose rookie driver continues to make a case against himself being in F1.

Toro Rosso’s Daniil Kvyat had a solid race converting 17th on the grid to ninth place ahead of Renault’s Nico Hulkenberg who took the final point for tenth.

Of note was the Haas fiasco brought about their drivers – Romain Grosjean and Kevin Magnussen – who increasingly are showing they have no place in F1 as they pranged into each other on the opening lap.

The incident only piles more misery on the American team whose boss Gene Haas must be shaking his head wondering what he is doing in the top flight with two has beens, while Guenther Steiner is running out of the sympathy vote as he mismanages this team into apparent oblivion.

The pair of unfortunates propped up the bottom of the results sheets for their ridiculous efforts.

After pressuring pole sitter Bottas after the start, Hamilton briefly got past his team-mate. Bottas though responded and re-took first place with a great move past the champion at Copse.

Bottas then exerted control over the pair’s first stint. The Finn pitted from the lead on lap 16, taking on another set of medium tyres, and soon after the complexion of the race changed utterly.

Alfa Romeo’s Antonio Giovinazzi lost control of his car on entry to Club corner and ended up beached close to the apron of the gravel trap.

The incident brought out the safety car and Hamilton approaching the final corners immediately swing towards the pit lane. The rapid reaction and a set of hard tyres put the Briton out into a lead he would hold until the flag.

Bottas, meanwhile, was now locked into a two-stop race and would need to pit again. And armed with good pace and thanks to the fireworks happening behind, the Finn was comfortably able to pit again on lap 45 for soft tyre and emerge in second.

While Hamilton’s 80th career win, his record sixth at Silvertrone and Mercedes’ seventh one-two finish of the year will occupy the headlines, the action-packed battle for the final podium place between Ferrari and Red Bull was just a thrilling for the huge crowd.

The contest went right to the race start. When the lights went out Leclerc held third and ahead of Verstappen. Behind them Gasly, starting in fifth place, made a good getaway, but Vettel’s start was better and the Ferrari managed to get past the Red Bull on the run to Turn 1.

Verstappen pushed hard to get past Leclerc but the Ferrari driver resisted well and he eventually forced an error from the Dutchman that dropped him back towards Vettel.

That scrap, though, allowed Gasly to close up to Vettel and the Frenchman pounced on lap 12, ambushing the German down the inside of Turn 3 to take P5. His grip on the position was brief, however. At the end of the lap Gasly pitted for hard tyres and he rejoined the action in P10.

On the following lap, Versteppen followed suit, immediately behind Leclerc. The pit stop battle was won by Red Bull and the Dutchman swung out into the pit lane alongside the Ferrari. They stayed side by side almost to the exit but eventually Leclerc, marginally behind, gave way and Verstappen was elevated to fourth.

Again, though, his advantage was short-lived. On cold tyres Verstappen struggled for grip and he ran wide. Leclerc swept past to retake P3. What followed was an epic battle for the position, with both drivers racing on the limit for several wheel-banging laps that saw Verstappen only just hang onto the position.

However, the battle was defused when Giovinazzi beached his car and the SC period sparked a flurry of pit stops. Hamilton was first in for hard tyres, a move that handed him the lead ahead of Bottas who didn’t stop. Vettel was next in for the same compound and Max then followed suit.

Leclerc was briefly left on track and when Ferrari eventually pitted him for hard tyres he dropped to P6 behind Verstappen and Gasly, with the top three positions now occupied by Hamilton, Bottas and Vettel.

When the race went green again the combat between Verstappen and Leclerc resumed once more. This time it was Leclerc on the offensive and with Verstappen again struggling for grip on the hard tyres, the Ferrari driver made his move.

Once again they fought tigerishly but eventually Verstappen pulled clear of the Ferrari. And with pace in hand over Gasly, who was on older hard tyres, Red Bull made the smart moved and allowed verstappen through to claim P4 and begin pursuit of Vettel.

On lap 36, Leclerc began to exert heavy pressure on Gasly and into Vale the Ferrari driver went around the outside of the Red Bull. Gasly tried to defend but he had to give way eventually and Leclerc moved ahead.

The reverse was happening further up the road, as Verstappen attacked Vettel. On lap 38 the Red Bull driver set up the perfect move, closing in and powering past the Ferrari into Stowe.

However, the move meant that Verstappen went slightly wide on exit and Vettel saw an opportunity. He closed up behind Max but misjudged the braking point for the following corner and slammed into the back of Verstappen’s RB15.

Both drivers ended up in the gravel trap but Verstappen was quickly back on track, in fifth place behind Gasly. Vettel, though, dropped to back of the field, pitted for a new front wing and was later handed a time penalty for causing the collision. Verstappen, now driving a damaged car, settled into fifth and nursed his car to the flag.

And then after 52 action-packed laps Hamilton crossed the line to take his 80thcareer grand prix victory and a record sixth British Grand Prix win ahead of Bottas and Leclerc. The Briton also managed to pick up the point for fastest lap on the final tour of the race.

With the Red Bulls in fourth and fifth, sixth place went to Sainz, the Spaniard profiting from the safety car to rise from P13 on the grid. Behind him  Ricciardo finished in P7 ahead of Räikkönen, Kvyat and Hulkenberg. 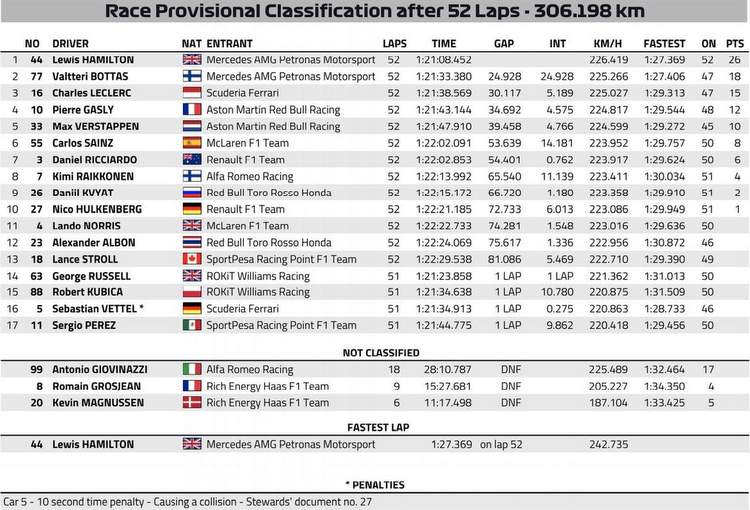 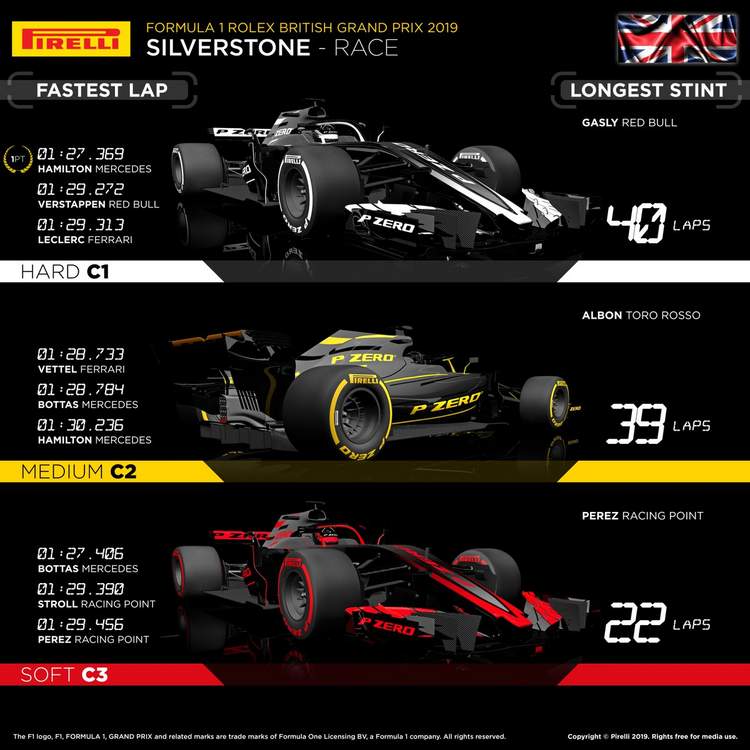 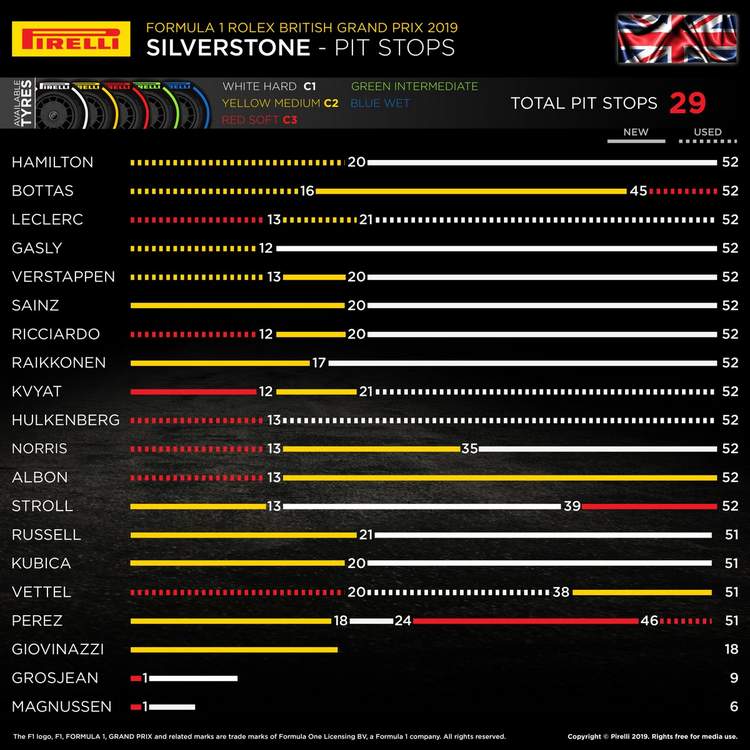