Mercedes: A surprise to have both cars on the front row 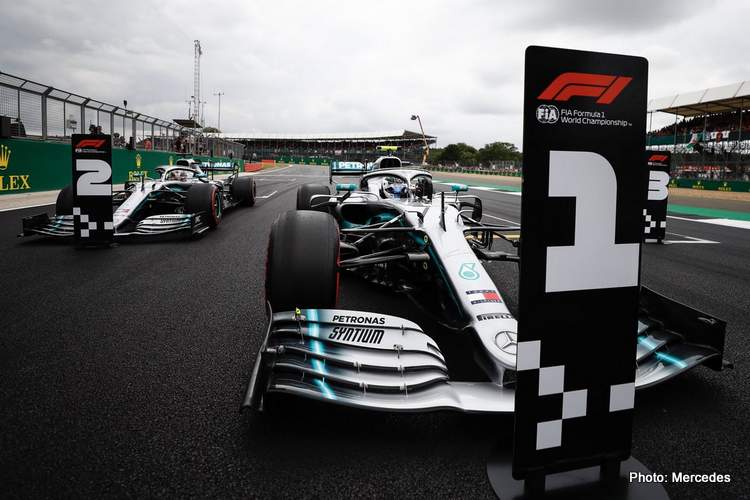 Mercedes report from qualifying for the British Grand Prix, Round 10 of the 2019 Formula 1 World Championship, at Silverstone.

Valtteri Bottas: “When I got the radio call that I qualified on pole, I was just really happy – I’ve been missing this feeling. It’s very difficult to beat Lewis here, he’s always very strong in Silverstone. My lap wasn’t perfect, there was still some margin left to improve, but no one got a perfect lap together, so it was enough in the end.

“I now have to make good use of the pole; Lewis’ race pace has been really strong this year, so I’m sure it’ll be a good fight tomorrow. Charles will also be a threat, especially in the beginning of the race because he’s starting on the softer tyres.

“We are starting on the Mediums, which will make the start tricky, but should be the better choice in the long run. I’m looking forward to the race, it should be good fun.

Lewis Hamilton: “Congratulations to Valtteri, he ultimately did the better job today. It wasn’t the best of qualifying sessions for me, I had a difficult run in Q2 and the first run in Q3 was also not very good.

“The last one was ok, but certainly not perfect – it’s just one of those days, sometimes you get into a rhythm and then other days you don’t. But there’s more to come; it’s a long race tomorrow, so I will try and see how I can progress forward from the position I’m in.

“This is a race you’ve got to try and win, but it is not an easy one to win – every year you come, it’s always a massive challenge. The long runs yesterday looked good, so I hope to utilise the tyre advantage from the Mediums tomorrow.

“Coming to this weekend the energy is just incredible, it’s uplifting for me and the entire team. I’m going to try and bring myself together in a positive way tonight and come back stronger tomorrow.

Toto Wolff: “To have both cars on the front row today came as a little bit of a surprise for us because we were on the back foot through qualifying. We expected Ferrari to be very strong but when we came to Q3, they seemed to go backwards and we went forwards; the grip on track ramped up, the drivers found their rhythm and it all came towards us.

“On the first run, Valtteri had a fantastic lap and Lewis made a small mistake; on the second run, Valtteri couldn’t improve but Lewis did an almost identical lap to Valtteri’s first one. These were the tiny things that made a difference in the end.

“We are hoping for an exciting race tomorrow: our Medium tyres will be a few metres less competitive from the start line – hopefully after that, they will prove more robust and we can deliver some of the race pace we saw on Friday.

James Allison: “Much like yesterday, it was a tough old day and we were trying to find lap time that has been a little bit elusive throughout. Again like yesterday, our opposition looked very threatening on single-lap pace and Ferrari were perhaps the favourites heading into Qualifying.

“But in the end, in Q3 when it properly counted, both drivers managed to find the pace and Valtteri took a well-earned pole with Lewis a hair’s breadth behind. It hasn’t been easy to get the best from the tyres on a track which both loads them heavily through the fast corners, then cools them quite rapidly in the cool air conditions; that has made life very difficult this weekend.

“We now look forward to an exciting race: hopefully we can use the good launch pad of the front row to deliver some of the long-run performance we saw during Friday practice.