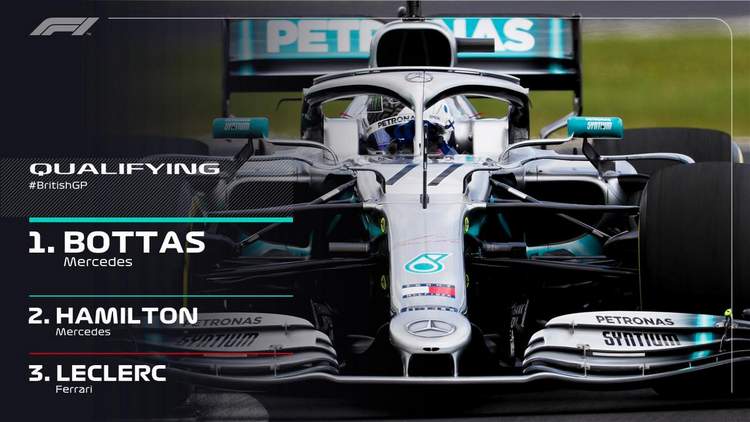 Valtteri Bottas broke British hearts as he topped the timing screens at the end of qualifying at Silverstone, beating local hero and Mercedes teammate Lewis Hamilton by six milliseconds ensuring an all silver front row for tomorrow’s race.

Bottas summed up his tenth F1 pole position, “It was very good again, it reminds you why you do this. It’s been pretty close all weekend and today with Lewis – it’s good to get a good lap and get pole.

“I knew the first lap was good but it wasn’t perfect and honestly I should’ve improved in the second run and I’m glad it was enough – it’s not easy to get a lap together.”

It was incredibly close but in the end, a mistake during Hamilton’s first Q3 run at Brooklands was compromised when the rear stepped out and then, on his second run, the car did not switch on in the first sector.

As a result, Hamilton will be starting from second with his teammate to beat in the race tomorrow, “Firstly congratulations to Valtteri he did a great job in qualifying, and I wasn’t good enough.

“It got a bit away from us, I sacrificed a lap in Q2 which would’ve helped us, and the second lap in Q3 just wasn’t that good. It’s a long race tomorrow and we’ve got a great crowd here so we’ll see what we can do.

“It’s the best grand prix of the whole year and that is because of the energy the people bring, and the tracks are brilliantly designed, but it’s the people that make this the best,” added the reigning World Champion.

Ferrari looked good after Q1 but when the chips were down – party mode deployed – they were lacking despite the efforts of Charles Leclerc who was eight-hundredths shy of top spot but a whopping six-tenths up on his teammate Sebastian Vettel who was only good for sixth.

Ahead of the German, Max Verstappen restored order at Red Bull by beating teammate Pierre Gasly for the first time this weekend. The Dutchman doing the business to claim a fourth-place start, 0.183 of a second adrift of the benchmark time but three-tenths up on the Frenchman.

Best of the Rest was Renault’s Daniel Ricciardo who ended the season seventh fastest, a full second down on Bottas, pipping rookie Lando Norris whose shares continued to soar with the eighth-best time while more experienced McLaren teammate Carlos Sainz failed to make it beyond Q2 – the Spaniard ended 13th.

Nico Hulkenberg was tenth, a couple of tenths off Ricciardo in the sister Renault.

A glance at the times shows that the top four were within two-tenths of one another, while the midfield – from seventh to 17th (in Q1) the gap was only seven-tenths of a second, as close as it gets.

Reflecting on yet another front-row lock-out by his team, Mercedes boss Toto Wolff said, “I think Bottas has looked more in control all weekend so far, to be honest. He put in a very good lap that put Lewis up against it.

“He came very close is it but now he’s on the wrong side of this grid for the race tomorrow. It came as a little bit as a surprise but finally, in Q3 they went backwards and we went forwards. The grip ramped up, the whole car heated up and that made the whole thing come towards us,” explained Wolff.

In the opening qualifying segment Hamilton took an early lead, posting a time of 1:25.513 to take P1 two hundredths of a second clear of Leclerc. Behind them Verstappen slotted into an eventual P3 with a lap of 1:25.700.

Bottas, meanwhile, eased through to Q2 in P4 ahead of Vettel and Norris.

Further down the order, the tussle for the final spot in Q2 was tight. In the end Pérez did just enough to claim P15 and passage to the next segment with a time of 1:26.649, just 0.013s ahead of Magnussen who was eliminated in P16 ahead of Kvyat, Stroll and the twin Williams cars of Russell and Kubica.

In Q2, both Mercedes drivers went out for first runs on medium compound tyres, as did Verstappen and  Gasly, and Ferrari’s Leclerc. Vettel, however, went a different route, with the German starting the session on soft compound tyres.

And while Leclerc set the pace on the yellow tyres with a time of 1:25.646, taking P1 ahead of Bottas, Hamilton, Verstappen and Gasly, Vettel’s lap on the red-banded compound was poor and after the first runs he found himself in P8, behind Ricciardo and Norris.

In the final runs the top five all went out again, but while Mercedes and Red Bull backed out of improvements on soft tyres to ensure they will start on the more durable medium compound, Leclerc went quicker on the red-walled compound to take P1 with a time of 1:25.546.

Vettel, meanwhile, dropped to P11 as rivals improved, but he too made an improvement in the final run and his time of 1:26.023 was good enough to take P5, splitting the Red Bulls. Ferrari will thus start on soft tyres.

Eliminated at the end of the session were the Alfa Romeos of Antonio Giovinazzi and Kimi Räikkönen in P11 and P12 respectively, 13th-placed Carlos Sainz of McLaren, Haas’ Romain Grosjean and Racing Point’s Pérez.

In Q3 it was Bottas who seized the initiative and the Finn posted a good lap of 1:25.093 to claim provisional pole 0.252s ahead of Hamilton, with Verstappen a tenth further back. Leclerc was fourth, with Gasly fifth.

And there was to be no denying Bottas a tenth career pole despite failing to improve on his final flyer and that gave Hamilton an opportunity, and though the home favourite put in a good lap, he ended up missing out on pole by the tiny margin of seven-thousandths of a second.

Leclerc jumped Verstappen in the final run to claim third while Gasly held fifth, two tenths ahead of Vettel. Behind them, Ricciardo finished seventh ahead of Norris, Albon and Hulkenberg. 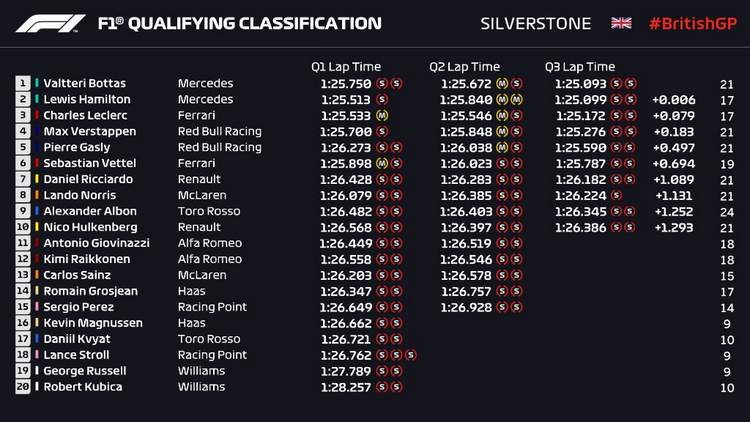