Alfa Romeo: We like to think it’s a pole position of sorts 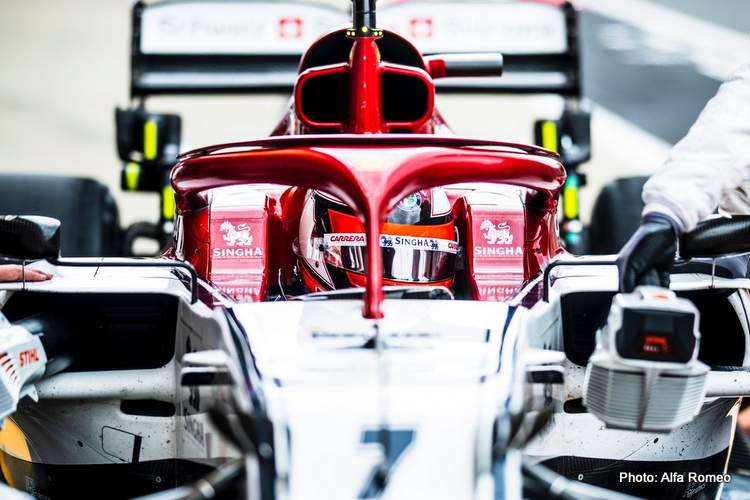 Big puffs of oily smoke filling the air, tyres screeching, the driver fighting the unfamiliar feedback of the steering wheel.

Our Saturday afternoon in Silverstone definitely started in a challenging way, asking the best of us just to achieve the objective we had set ourselves to. Thankfully, this was just the show run we did with the historical Alfetta, an hour or so before qualifying.

The showpiece event of the day was a slightly more straightforward affair. Qualifying went without a hitch: the rain that was feared before the session did not materialise, there were no big surprises and the session produced fairly predictable – if perhaps unspectacularly so – results.

Missing out on Q3, after two races in which we had placed our cars in the top ten, was a bit of a setback. It is, however, one with a potential silver lining, as the free choice of tyre may prove a boon come race day (especially if the English weather plays along).

In the end, however, locking up the sixth row on the grid doesn’t mean we will not be at the very front of the field on Sunday. Indeed, we will be in the lead straight from the start – with Kimi Räikkönen, who will be opening the Drivers’ Parade on the very same Alfetta that dominated Formula One in the first two years of the Championship.

We like to think it’s a pole position, of sorts.

Frédéric Vasseur, Team Principal: “You always aim as high as you can in qualifying but, all things considered, we can be very happy to be starting immediately outside the top ten. Our pace was very good and it would have probably warranted a place, or even two, in Q3, but the margins are so small that just a tenth can drop you out of the final shoot-out easily.

“In any case, we remain positive: our race pace was promising in practice and hopefully we can make up some places tomorrow. Choosing our starting tyres may be a key element, as it has been in a few races this season already, and give us an advantage in the race tomorrow. We are confident we can be in the fight for points.”

“To be honest that was not what we were hoping for, but we didn’t have an awful lot more speed unfortunately. Overall it seems to be a difficult weekend for us, it’s not easy to get everything together. Everyone asks if the free tyre choice is an advantage – how do I know? We’ll see tomorrow.”

“It was a bit frustrating to miss out on Q3 for just a tenth of a second. I was pretty happy with my final lap in Q2 until the final corner, where I made a small mistake: when the gaps are so small, this is the price you pay. We wanted more but we still have a decent opportunity to have a good race.

“We have to take the positives, we get to choose our starting tyres and I think it can be an advantage. Our pace on softs in practice wasn’t great so I think to start on one of the other compounds is a better option. We are just outside the top ten – if we have a good start and a good strategy we can be right in the fight for points.”

Locked up the sixth row tomorrow 🏁