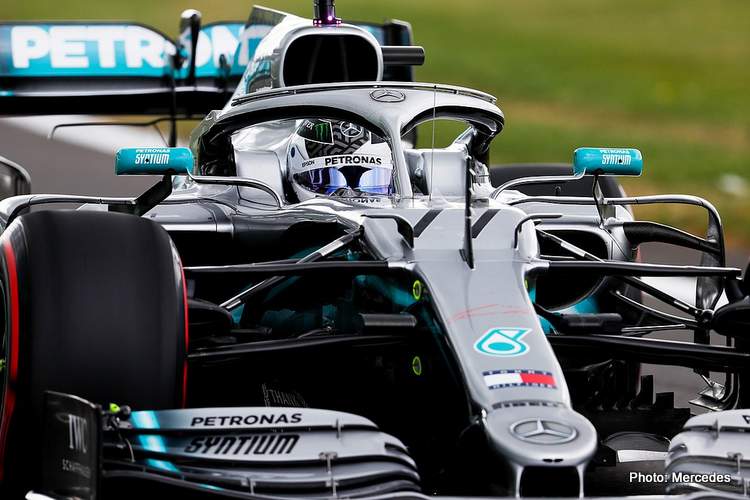 Valtteri Bottas ended day one of the British Grand Prix weekend fastest of all, on a windy and gusty afternoon at Silverstone which tested drivers throughout the 90-minute-session and caught out several drivers including top guns Lewis Hamilton and Sebastian Vettel.

Despite a spark-plug issue, which cost him some track time, Bottas did enough to top the timing screens with a best lap time of 1:26.732 when the flag dropped to end the 90-minute with teammate Hamilton 0.069 of a second shy of the top time.

Charles Leclerc was quickest of the Ferrari boys, two tenths down on the benchmark time and a quarter second up on teammate Vettel.

After topping the morning session, Pierre Gasly was fifth and again faster than Red Bull teammate Max Verstappen, this time three tenths between the pair.

Lando Norris split the Blues with the sixth best time in the McLaren with Carlos Sainz eighth fastest as the Woking outfit continue to impress with their revival.

Toro Rosso’s Alex Alnon was ninth followed by Sergio Perez in the Racing Point rounding out the top ten. the Mexican finding a quarter of a second that his teammate Lance Stroll could not.

Ominously for their rivals, Mercedes showed impressive race pace, but it would be fair to say that no one was really showing their hand on day one at Silverstone.

After ending FP1 earlier in the day Best of the Rest, Renault slipped down the order with Daniel Ricciardo 14th, a tenth faster than teammate Nico Hulkenberg – the pair around 1.3 seconds shy of the top time.

Ricciardo’s session ended prematurely when his car cut-out and forced him to park and limiting his session to 17 laps while the sister car managed 33 laps in the session.

Worth noting was the fact that Romain Grosjean did not bend any metal in the afternoon session, but was seven tenths down on his Haas teammate Kevin Magnussen, the pair ending the day 12th and 18th respectively.

Notably the gap between the first and tenth was 1.2 seconds, while only a second covered the cars from sixth to 17th. 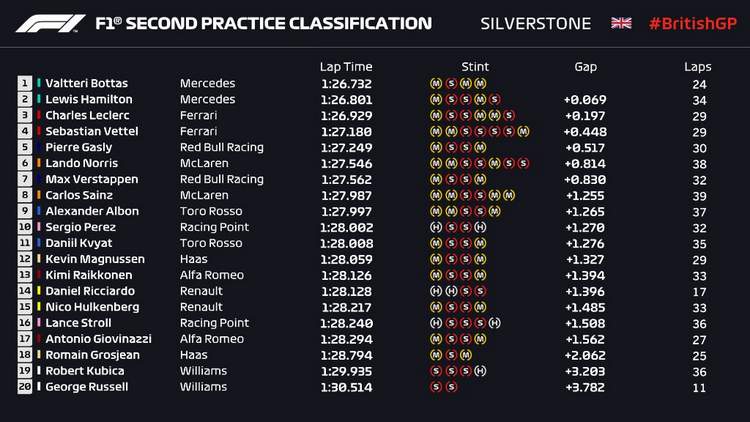