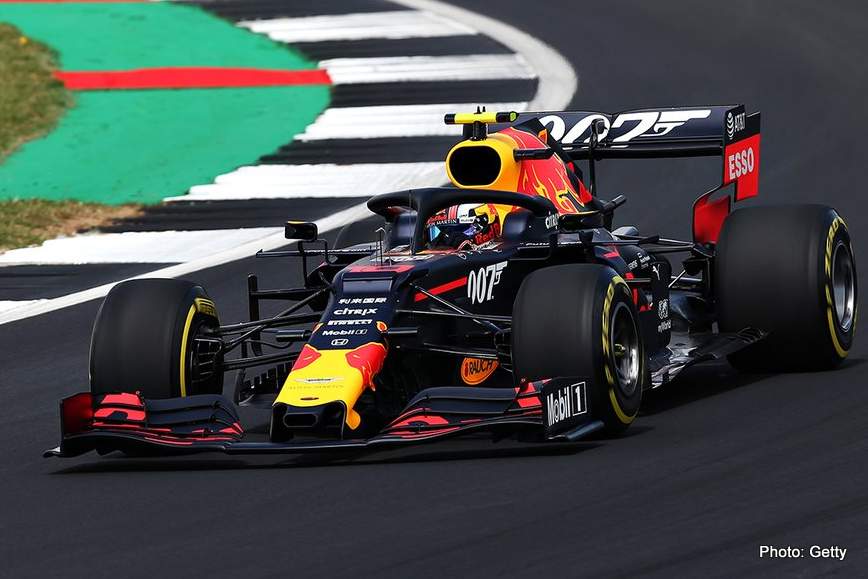 Silverstone began life as an airfield, and thus has a ‘perimeter’ layout that covers a vast acreage. It’s been adapted again and again over the years – with the recent switch to the ‘Arena’ layout possibly the biggest change, but the basic template remains: it’s a big, roomy, above all fast track replete with epic, high-speed corners.

It’s a set-up that has provoked scintillating duels – but even solo laps have been known to make even the most stone-hearted racing drivers giggle. It’s a firm favourite among those driving – but happily it’s also one of the very best circuits at which to watch a Grand Prix. Through Copse – and particularly Maggotts-Becketts-Chapel – spectators can see an F1 car at its best.

Max was the first Bull out of the garage to complete an install lap in Free Practice One, closely followed by Pierre. With a brand new surface at the Silverstone circuit for this year’s British Grand Prix the first session was an important opportunity for the Teams and drivers to get used to the new track conditions.

The ‘green’ surface did prove tricky for some with several cars spinning. The session was also red flagged briefly when the Alfa Romeo of Kimi Raikkonen came to a stop on track with a mechanical issue. Conditions were further complicated with patches of light rain falling throughout the session.

“I’m happy because it was a really good day on our side and the best Friday of the season. We made some changes after Austria and we have a good plan on how I can improve things. There are still a few improvements I can make and my lap wasn’t perfect in FP2 so I can still extract a bit more, but overall I’m happy.

“It’s only Friday so we won’t get excited but we need to keep going in this direction. It will be important not to make any mistakes and perform tomorrow when it’s important, but the feeling I have today is a lot better. This is a high-speed track and with the wind today it made the conditions super tricky as the balance changes from one corner to another, but this is the same for everybody.”

“From my side, today was not so good and I didn’t find a good balance with the car in FP1 or FP2. I was sliding around a lot in the wind and struggling for rear grip, so we have a bit of work to do. Even though I’m not fully comfortable yet we’re not that far away and the times are pretty close which is a positive.

“There is a lot more grip with the new tarmac which all drivers like. In general, the new surface is quite a good change but there are some pretty bumpy sections out there, especially going into Turn 6 and Turn 9. It’s not very easy on tyres here with the high energy corners so it will be interesting to see what choices everyone makes tomorrow and in the race.

“It’s promising that we are still quite close to Mercedes and Ferrari so there is still a lot of potential for the weekend.”