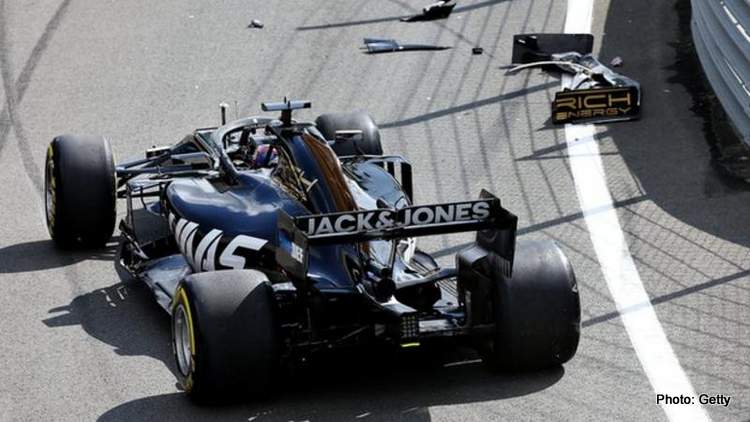 Romain Grosjean did his rock-bottom shares no favours after he crashed at the end of the Silverstone pitlane when he lost control of his Haas at very low speed, putting into question his suitability to continue in Formula 1.

It was the stupidest crash I have witnessed in F1 and triggering this piece which has been on ice for far too long as we wait for the Frenchman to deliver what is expected of him and raise his game.

But there seems no end in sight to his incompetence which, for a driver with 152 Grand Prix starts, these shenanigans are simply unacceptable as he clearly does not have what it takes to continue at the highest level.

The wayward Frenchman pranged his Haas when he spun between the Armco at the pit-lane exit, damaging his wing before driving the wrong way down the pit-lane, then driving out on track with shards of the gold and black front-wing strewn across the track.

He reported, “I spun on the pit exit. The front wing is shattered!”

Prompting Sky F1 commentator Anthony Davidson asked the question, “How did he allow that to happen. That’s the kind of stuff you see in Formula Ford, and probably not even there.”

BBC pundit Jolyon Palmer, like most of us, could not believe what he witnessed: “It’s a clanger. It’s an absolute clanger.”

Adding insult to the embarrassment, with 40 minutes to go in the session and no lap time set by Grosjean, he spun out again!

Surely Haas cannot indulge the Frenchman’s folly any longer, he is simply becoming a worse F1 driver with every session and every race weekend.

He is now not only a danger to himself, but his rivals are surely worried every time they come upon the #8 Haas because the guy driving it is an accident waiting for a place to happen.

Time to let him go before he hurts himself, or someone else. He has no place among the best drivers in the world.

Big Question: When will Romain get the boot?