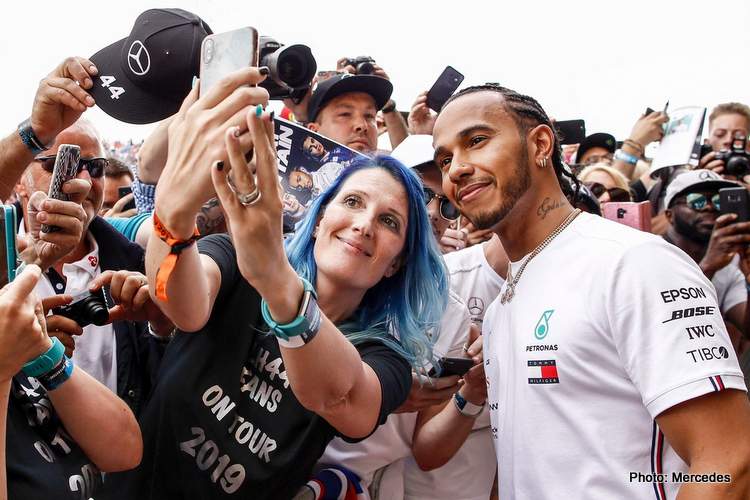 Formula 1 World Champion Lewis Hamilton would like more of the limelight on a crowded sporting Sunday that could see the Mercedes driver win his home British Grand Prix for a record sixth time.

While Silverstone will be a sellout, the finals of the cricket World Cup — England against New Zealand at Lord’s — and Wimbledon men’s singles will also be commanding mass attention.

“What I don’t understand is why the organisers put the race on the same day as all these other big events,” Hamilton told reporters on Thursday.

“I hope in future they put this on… it’s a special weekend, it needs all the focus of the whole country,” he continued. “I think people will be switching between channels on Sunday, not sure what to watch.”

Mercedes have won eight of nine races so far this season, Hamilton six of them and he leads teammate Valtteri Bottas in the championship by 31 points.

All three sports will be broadcast on terrestrial television this weekend, a rarity in Britain where Formula One is usually exclusively on the Sky Sports subscription platform — as has been the case for the cricket up until the final.

Hamilton has won four of the past five British Grands Prix, and been on pole position for the last four years in a row. Sunday’s crowd is expected to exceed the 140,500 that turned up on race day in 2018.

That will be reminiscent of the early 1990s when ‘Mansell Mania’ was at its peak with 1992 champion Nigel Mansell drawing huge crowds.

Despite his obvious pulling power and unprecedented success for a British driver, Hamilton remains something of a divisive figure in his home country.

Mercedes team boss Toto Wolff has highlighted this, arguing that Hamilton’s greatness is not appreciated enough by his compatriots.

Tour de France winner Geraint Thomas was the BBC Sports personality of the year in 2018, and Hamilton has been ignored in recent honours lists despite being his country’s most successful racing driver of all time.

In the land of Ferrari, Gazzetta dello Sport newspaper declared him their man of the year, however. Asked why he might have less adulation than Mansell, the Briton said he did not feel unsupported.

“People have the right to choose who they support,” he said. “I remember growing up in Stevenage and I never in a million years thought I would have a single supporter, aside from my mum and my dad.

“I feel really privileged in just even having one. I’ve got quite a lot of people that come here and I’m so grateful… the more the merrier. I guess the more time I spend here, I’ll have more opportunities to turn people’s opinions.”

McLaren’s Lando Norris, at 19 the youngest ever British Formula One driver, cheekily suggested maybe Hamilton should grow a Mansell-style moustache.

After a lively exchange about their relative hairiness, facial or otherwise, Norris ended up weeping with laughter in front of the cameras.

Big Question: How to avoid clash of big events on annual F1 calendar?

Guys, we can’t believe how many of you came out to see us today 🙏