Haas: It looks like we’re well prepared for the weekend 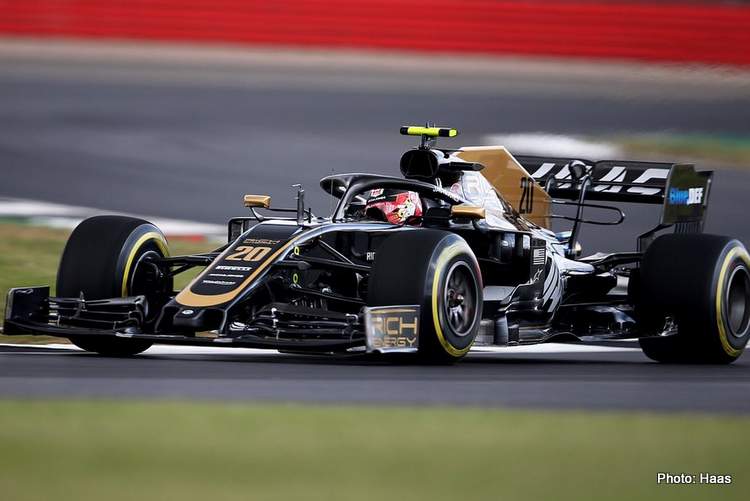 The 10th round of the 2019 FIA Formula One World Championship began with practice Friday at Silverstone Circuit as teams prepared for Sunday’s British Grand Prix.

Speeds improved in FP2 for both drivers. After transitioning from his initial new set of Yellow mediums, Magnussen turned the 12th-best lap of 1:28.059 on his 14th lap before switching back to mediums to complete his high-fuel run.

Grosjean’s session was hampered by a hydraulic leak that took 40 minutes to repair before an initial run on mediums. He ran his second stint on softs, recording the 18th-best lap of 1:28.794, before concluding his afternoon on a high-fuel run sampling both compounds.

Romain Grosjean: “The start of the day was a bit embarrassing. I turned the pit-limiter button off, the tires were a bit cold and grip was low, next thing I knew I was backwards. It didn’t feel so good. After that though we got back on track and ran our program.

“I had a bit of an issue with a hydraulic line in the afternoon, we missed around half an hour of the session, but we’re getting some good data. This is definitely a package I enjoy driving more, but the performance is not there yet, which is something you would expect.

“There’s been a lot of development through the car, and when you revert back to an early spec it’s tricky. There’s definitely a better feeling in it, we’re just looking to develop it now, understand it, and move forward.”

Kevin Magnussen: “It’s been a good day. I think we had some good long runs today, that’s been the main priority. We’ve obviously tried many different things this weekend to try and learn some more about our struggles. There’s a lot to look at. It’s going to be a busy night for the guys to get through everything, and to understand what we can do for tomorrow.

“I’m still gunning for the top 10 in qualifying, I’ll try to get into Q3 and qualify as high as possible. Obviously, the main priority this week is to get the long run pace right, so that we can fight in the race and go for some points.”

Guenther Steiner, Team Principal: “A couple of mixed up sessions. I think we’re looking a little better than the last two races in the long runs – at least with one car. We still need to find some speed for Romain (Grosjean).

“In FP1 he spun on pit-lane, then in FP2 a hydraulic leak meant he didn’t get the full running we wanted to give him. We’ve got another hour tomorrow morning to work on things. With Kevin (Magnussen) we made good progress. It looks like we’re well prepared for the weekend.”