Silverstone: The Past, The Present and The Future 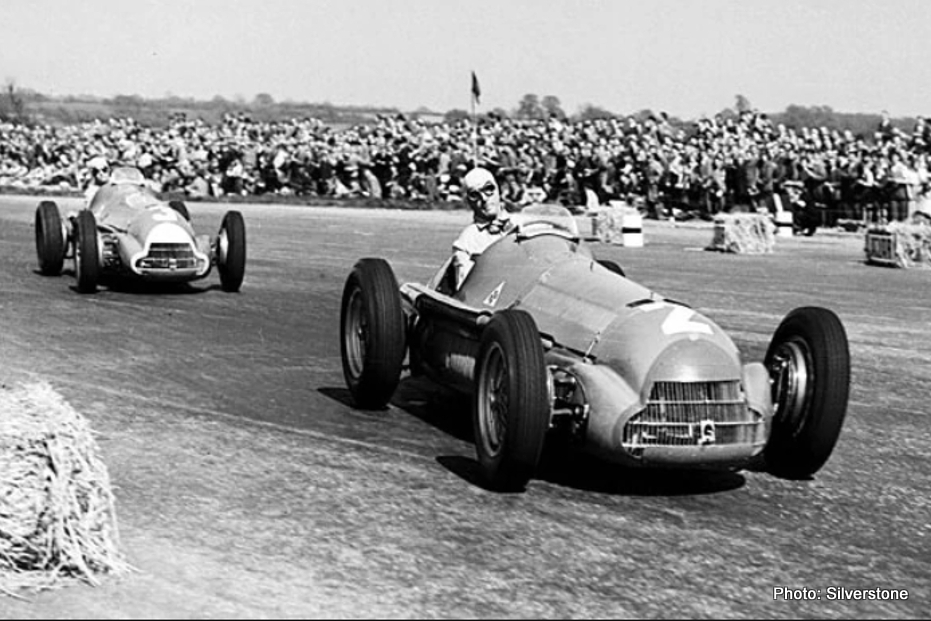 There are two facts that even the most casual racing fan probably knows about Silverstone: firstly that it used to be a World War II airfield – names such as ‘Hangar Straight’ provide a clue – and secondly that it hosted the very first Formula 1 World Championship grand prix in 1950, watched by none other than the future Queen Elizabeth II and her father, King George VI.

The airfield was built in 1943, and another straight – the Wellington Straight – commemorates the giant Wellington bombers that were stationed there.

But among the great names synonymous with Silverstone’s history, from Giuseppe Farina (the winner of that first Silverstone grand prix) to Lewis Hamilton, one is conspicuously missing. That of the little-known Maurice Geoghegan: arguably the most important racer ever to have competed at Silverstone.

Because without him, there would have been no Silverstone at all. The story goes that Geoghegan, a Silverstone resident, was looking for somewhere to try out his new Frazer-Nash in 1946. He couldn’t enjoy all the car’s power on the local country roads, so sneaked onto the (now decommissioned) airfield.

He was delighted with what he found, driving his car on an impromptu circuit down the abandoned runway and perimeter road, so he told a few of his petrolhead friends about his clandestine experience.

The following year, 12 of them organised an illegal race…and the rest is history. That first race would end badly for Geoghegan, who hit a sheep. But at least the post-event barbecue would have been a good one.

The current, ultra-modern, circuit is unrecognisable compared to those days – with the most recent remodelling coming in 2010 (thanks to a different track layout) and 2011 (with the addition of a brand new pit complex, called ‘The Wing’).

The redesigned ‘Arena’ layout is the result of major surgery to the traditional configuration, disrupting the flow somewhat, but crucially it leaves the famous Maggotts and Becketts complex untouched: two corners that put some of the highest energy loads of the year through the cars and tyres.

It’s hard to describe accurately what this sinuous piece of asphalt feels like to drive, but the sensation is not dissimilar to that of being a salad leaf in a centrifuge.

With seven of the 10 Formula 1 teams based in England (and two of them within 10 minutes of Silverstone) the track is part of F1’s furniture, used extensively for shakedowns and filming days. It’s seen a lot in testing: Pirelli’s latest 2020 tyre test takes place there after the British Grand Prix, with Red Bull and Williams. This decades-long familiarity is one of the reasons why the place is known as ‘the home of British motorsport’.

But this is a story that might not have a happy ending: for Silverstone at least. Essentially the race spends more money than it earns: a situation shared by a few venues in Europe, which has already threatened to take Silverstone off the Formula 1 calendar in the past. This year’s British Grand Prix is the last one under the current deal, which is still to be renewed at the time of writing.

Silverstone’s managing director, Stuart Pringle, said that there was “no certainty” about the future of Silverstone as the home of the British Grand Prix, while there has also recently been a lot of talk about a possible street race in London instead, maybe in the Docklands area.

“The promoter still wants there to be a British Grand Prix and we still want to run it,” added Pringle. “But it has to be on the right commercial terms for us to sign a contract.”

The drivers all want to keep Silverstone on the calendar: Charles Leclerc said that it was one of the most enjoyable places on the calendar to drive a Formula 1 car, while Max Verstappen insisted that if London eventually came in, it would have to be as an extra event.

But in Formula 1 you never know. So enjoy the Silverstone weekend. It may yet be the last.

Big Question: How important is Silverstone for Formula 1?