Honda: A momentous day and a great pleasure to win again 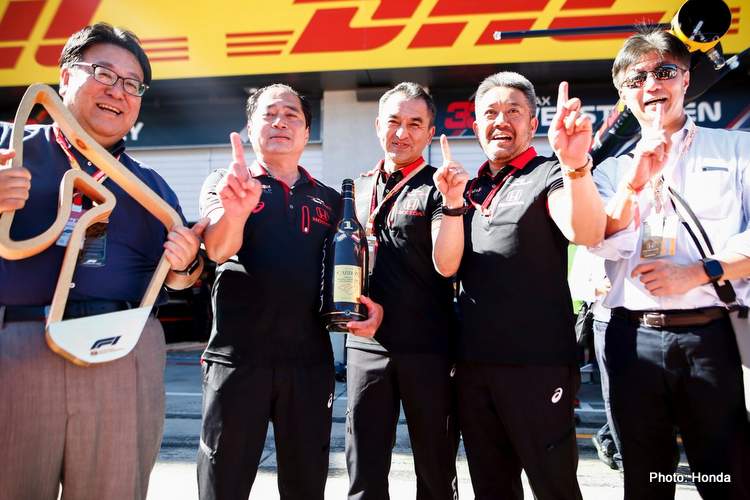 Honda hailed a fresh start in Austria on Sunday after celebrating the Japanese engine maker’s first Formula 1 race triumph since 2006, making it 73 wins in the top flight for the manufacturer after a 13 year hiatus.

After three difficult and painful years with McLaren, and a season with Toro Rosso in 2018, the Red Bull partnership bore fruit with Max Verstappen beating Mercedes and Ferrari.

“We finally made it,” said Honda F1 technical director Toyoharu Tanabe. “This win is also a way of saying thank you to all our fans, all over the world, for their continued support. We have been back in this sport since 2015, but today feels like a new beginning.”

The Japanese company’s last win was at Hungary 2006 with now-retired Briton Jenson Button.

In three increasingly fraught years with McLaren, marked by a lack of performance compared to the top teams and a lack of reliability, Honda had never come close to the podium with fifth being the team’s best result.

They sold their own team at the end of 2008, with the outfit renamed Brawn GP and winning both titles in 2009 with Mercedes engines.

The German carmaker bought Brawn in 2010 and has won the last five drivers’ and constructors’ crowns in the V6 turbo-hybrid era that started in 2014.

“It’s not been easy for them (Honda) in the past but today it’s been incredible, so I’m very happy for them,” Verstappen told reporters. “I think this is very important for us and also for the future, for Honda as well.”

“I’m just very happy that it happened today and it just gives a lot of confidence as well to the boys and maybe a few doubts are going away because of it. So yes, at the moment it’s an amazing feeling.”

Tanabe said Sunday was just the first step: “We keep pushing very hard towards the end of the season and next year as well.”

It was a momentous day for Honda as Aston Martin Red Bull Racing secured our first win since returning to Formula 1 in 2015 courtesy of a stunning drive from Max in Austria.

Starting from second place, Max had a difficult start and dropped to seventh, one position ahead of Pierre. The two ran in tandem through the early laps before Max started making progress, overtaking Lando Norris and Kimi Raikkonen to move into the top five.

A long first stint saw Max lead for a spell, and after pitting for hard tyres on lap 31 – later than his rivals ahead – he rejoined in fourth place ahead of Lewis Hamilton. From there, Max was on a charge and fought his way past Sebastian Vettel and Valtteri Bottas to run second, before hunting down Charles Leclerc.

A thrilling battle saw the pair go wheel-to-wheel, with Max finally taking the lead with three laps remaining and achieving our first victory with Red Bull.

Takahiro Hachigo, Chief Executive Officer: “For the people and parties who have supported us in this project.

“It is a great pleasure for us to win once more in Formula 1, especially because getting to this point has not been straightforward since our return to the sport in 2015. First of all, I would like to thank Max and Aston Martin Red Bull Racing for this victory.

“Of course, we must also thank Scuderia Toro Rosso and all the drivers who have given so much support to the project, as well as all the suppliers and related parties.

“I want to thank all our fans. With their support, we will keep challenging as we strive towards our ultimate goal, which is to win the world championship, taking this victory as a first step. Any future success we have is also thanks to our fans who are really a part of our team.”

“F1 was our founder Soichiro Honda’s dream and it is in our company’s DNA. We went through some tough times over the past five years on the race tracks and in the factory. I am speechless when I think about the enormous effort from all the Honda staff involved in this project, who always believed in themselves and never gave up and finally reached today’s victory. I think this embodies our ‘Power of Dreams’ motto.”

Toyoharu Tanabe, Technical Director (pictured above): “Thanks to the efforts of all the Honda F1 staff in Japan and the UK, who worked tirelessly on our PU development, we finally made it, our first win in the hybrid era, the first since Hungary 2006.

“And a special word of thanks to all their families who supported them. Thanks of course to Max for a great drive and to Aston Martin Red Bull Racing for providing him with a fantastic car. We must not forget the great contribution made by Scuderia Toro Rosso, who helped us get back on the right path last year.

“Honda has not done this alone and so we want to acknowledge the contribution of our outside suppliers. This win is also a way of saying thank you to all our fans, all over the world, for their continued support. We have been back in this sport since 2015, but today feels like a new beginning.

“While we can enjoy the celebrations for a short while, we must get back to work as soon as possible, because we still need to close our performance gap to the quickest teams.”

Every hour on the dyno, every failure, working to be better, working around the clock around the world.