Binotto: They are the judge, we need to respect that 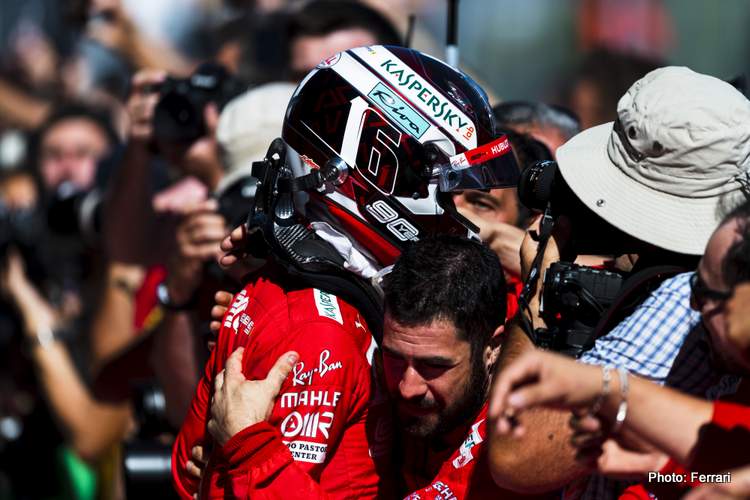 Ferrari ruled out appealing Max Verstappen’s Austrian Grand Prix victory on Sunday, after it was upheld by a post-race enquiry, even if they again felt Formula One stewards had made the wrong decision.

The result of the race was confirmed some three hours after the finish as stewards reviewed the Red Bull driver’s wheel-banging move on Ferrari’s Charles Leclerc two laps from the finish.

“We still believe that this is a wrong decision, that’s our own opinion,” team principal Mattia Binotto told reporters after the outcome was announced.

“We believe that Charles leaves the entire space, he had no fault, a collision has happened and he has been pushed and forced off the track.”

Three weeks ago in Canada, Ferrari missed out on victory when Sebastian Vettel was handed a five-second penalty after going off and returning to the track in an unsafe fashion while leading.

In that case Vettel finished first but was demoted to second, and Ferrari made a failed bid to secure a review of the stewards’ decision.

“They (the stewards) are the judge, we need to respect that,” Binotto said on Sunday. “And more than that, as a Ferrari fan — and I am ultimate Ferrari fan — I think it’s time for F1 to turn page and look ahead.”

Sunday’s exciting race was seen as an antidote to last weekend’s dull French Grand Prix, but the stewards’ enquiry took some of the immediate gloss off the track action with the result still unsure late into the evening.

Verstappen battled fellow 21-year-old Leclerc for the lead, after the Monegasque had started on pole position and appeared to be heading for a first win.

The Dutchman had dropped down the field after anti-stall kicked in at the start but scythed back from eighth at the end of the opening lap.

The pair, both tipped as future champions, had a brief wheel-to-wheel duel before Verstappen launched a move up the inside of the Ferrari into the tight uphill turn three.

Verstappen managed to seize the lead but not before banging wheels with the Ferrari, which ran off the track and took to the run-off.

Stewards decided it was a racing incident and took no further action.

The race was the third time this season Ferrari missed out on victory after leading from pole. An engine issue cost Leclerc victory in Bahrain in March.

Sunday was a chance for Ferrari to end Mercedes’ 10-race winning streak but instead that honor fell to Red Bull, with engine partners Honda celebrating their first win of the V6 turbo-hybrid era.

Binotto said his team’s improvement was down mainly to the track suiting their car better rather than a more sustained resurgence.

“Will we be able to fight and battle on all the tracks? I don’t think (so) yet,” he stated. “But again…we may bring some more development and I think we can only see race by race.”