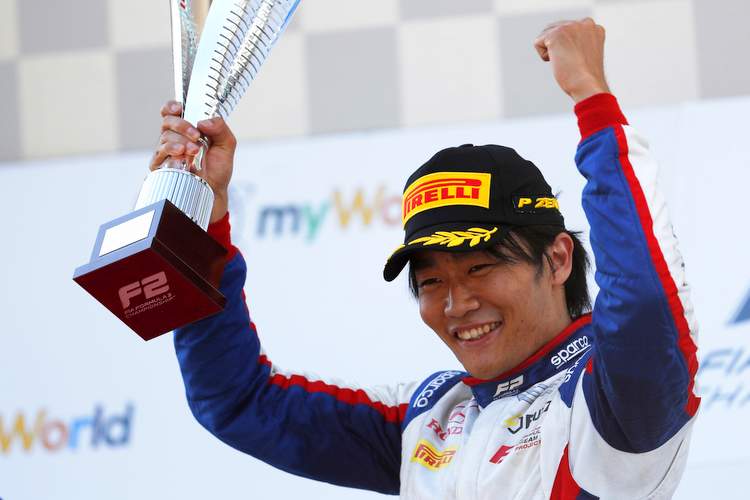 The Carlin driver hailed the victory as the best of his career over team radio, as he earned last season’s dominant force their maiden win of the campaign.

The Japanese driver finished ahead of UNI-Virtuosi ace Luca Ghiotto, who followed him past De Vries. The Dutchman lost a further place to Sérgio Sette Câmara, but ended up on the podium when the DAMS’ driver was dropped to fifth after a five second time penalty was added.

The race began in calmer circumstances with De Vries making a smooth start off the line to retain first place ahead of Anthoine Hubert. Guanyu Zhou quickly made an attempt on the Frenchman’s position, but ran out of track and swerved wide allowing Matsushita through to third.

The Japanese racer was up to second a lap later with a successful assault on Hubert, but he then switched his attention to building a gap between himself and those behind him, ahead of his pit stop when he would switch the prime tyre.

Tensions threatened to boil over further back when Sette Câmara’s attempts to pass teammate Nicholas Latifi ended with the Canadian getting thumped from behind and swung full circle. When he recovered, he had been dropped to P19 and the Brazilian was handed a five second time penalty for causing the collision.

Those on the option tyres went for Soft rubber on lap 7, leaving Sean Gelael in first, with front five De Vries, Matsushita, Ghiotto, Zhou and Hubert amongst the drivers making the change. Zhou suffered a gearbox glitch upon his return and dropped down to 15th before he was able to get back up to speed.

Seventeen seconds separated De Vries and the PREMA man out in front and the Dutchman’s charge began with an overtake on Ryan Tveter. Matsushita followed him through a lap later. Gelael was told to push harder over team radio, but by then the ART and Carlin men had already made their way past Patricio O’Ward and Tatiana Calderon for fourth and fifth, and were fast honing in.

With Gelael unable to form a gap out in front, Nikita Mazepin took a stab at the race lead and passed the Indonesian. The PREMA man was then overtaken by De Vries, who had also just passed Arjun Maini. Gelael pitted and a slow stop saw him fall further down the grid.

De Vries was joined by Matsushita and Ghiotto in the chase for first and was closing in on his teammate at the front of the field. The Russian still required a pit stop, but the Championship leader refused to wait and retook his place at the top of the pile. However, De Vries’ tyres had already taken a battering as the race headed into its final five laps.

Sensing this, the duo behind him pounced at Turn 1 and the Championship leader was dragged back to third in dramatic circumstances, after both Matsushita and Ghiotto made their moves on him stick in one clean sweep.

Having suffered earlier in the race, Zhou showed no slowdown in pace from the earlier issues, charging back through the pack to P6 thanks to a gritty recovery. Latifi also managed to dice his way through the field and re-enter to the points’ paying positions, but narrowly missed out on reverse grid pole as he finished in ninth behind the impressive Jordan King – who had started the race as far back as 15th.

There was one final course of action when Sette Câmara endeavoured to make the most of his race, with the knowledge of an incoming five-second penalty. The Brazilian set the fastest lap with just one tour of the circuit to go and managed to slide past former race leader De Vries, who was still struggling with tyre degradation. De Vries reclaimed the position upon the chequered flag as Sette Câmara’s penalty saw him drop to fifth.

Matsushita crossed the line in first, ahead of Ghiotto, who achieved his best finish since Barcelona. De Vries ran home in third, ahead of Hubert, with Sette Câmara in fifth, followed by Zhou, Louis Delétraz, King, Latifi and Jack Aitken.

De Vries stretched his lead at the top of the standings to 140 points, 29 ahead of Latifi in second place. Sette Câmara climbs to third on 92 points ahead of Aitken on 86 and Ghiotto on 85. DAMS’ retain their position at the top of the Teams’ Championship on 203 points, 34 ahead of UNI-Virtuosi. ART Grand Prix are third with 146, ahead of Campos Racing on 116 and Carlin on 97.

Campos Racing’s Arjun Maini has been disqualified from this afternoon’s F2 Feature Race results at the Red Bull Ring after it was discovered that his tyres had been fitted incorrectly to the car prior to the start.

When the Indian driver came in for his mandatory pit stop on lap 34 it was found that the rear tyres had been placed on the incorrect sides of the car.

The stewards examined the Technical Delegate’s report and concluded that the car was not in compliance with the Sporting Regulations and therefore was disqualified from the result.

Maini will start from the back of the Sprint Race grid on Sunday. 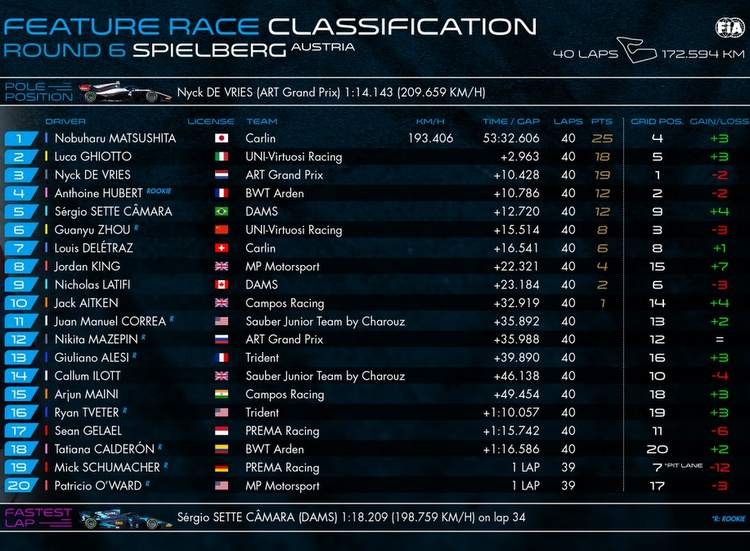