Alfa Romeo: Our goal is for both cars to score points in Austria 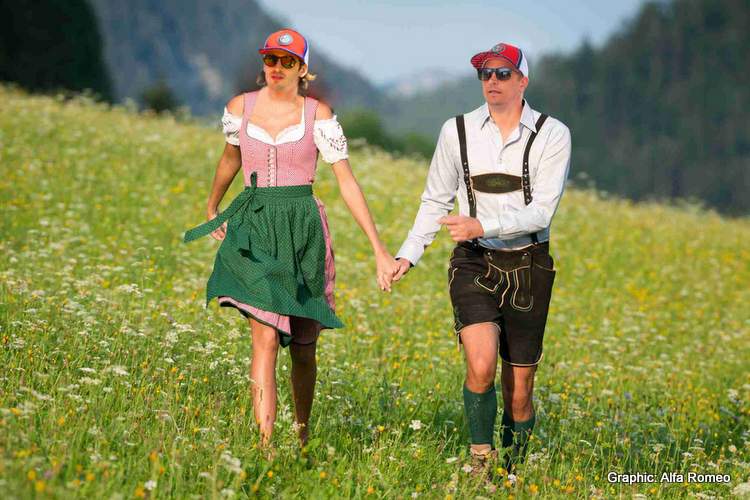 After a successful outing in France, our busy calendar takes us to Austria for round nine of the 2019 season, a magical place for music, history and nature and the ideal setting for the story we chose for our Race Preview.

Most of you will be familiar with the story of Romeo and Juliet, the tragic lovers divided by an intractable family feud. But maybe you won’t be aware of another, happier story of friendship – that of Stelvio and Giulia.

Up in the mountains of Styria, the hills were alive with the sound of engines as friends Stelvio and Giulia, quite literally, tore up the narrow roads of Spielberg aboard their powerful machines. Now, we don’t know how Stelvio and Giulia did look like, but let’s imagine for a moment they looked a bit like their respective Alfa Romeo Racing ambassadors, Kimi Räikkönen and Antonio Giovinazzi, frolicking in the fields in their lederhosen and dirndl (we know, this is an image that will be difficult to forget).

In between a lap and the other on their makeshift track, each time trying to improve their times, the two cemented their friendship by virtue of a common love of all things Austrian. They taught every child they could find to make music and sing, they composed beautiful symphonies (of course, from a very early age) and ate copious amount of Wiener Schnitzel (they just left the goatherd by himself, he liked to be lonely). And when the day of the big race finally came, Stelvio and Giulia helped each other surpass everyone’s expectations and claimed the big prize (they had Kaiserschmarrn to celebrate, obviously).

Sounds like a lot of cultural stereotypes, all bashed together in this preview as we had no other feasible idea? Maybe. But we scored a double-points finish in Spielberg last year, and we’d really love for it to become yet another cliché on our list.

Until then… so long, farewell, auf wiedersehen, goodbye!

Frédéric Vasseur, Team Principal: “Everyone is talking about the points scored for our Team in Le Castellet, but for me it was even more important to see how the team reacted to the streak of weak races.

“We picked ourselves up, we worked hard and we got the performance back into the car and that was exactly the spirit I wanted to see. Austria will be no different and that’s why I’m quite confident for both cars to score points. At least that’s our goal.”

Kimi Räikkönen: “What can I say? I enjoyed the race in France and I hope the one in Austria will be fun too. The upgrades seem to work, we understand car and tyres better and therefore I don’t see any reasons why we shouldn’t be able to score points again.”

Antonio Giovinazzi: “Going into the Spielberg weekend I would like to concentrate on the positives of the previous race. The pace in qualifying was great and it was good to feel the fighting spirit within the team to come back, to gain performance and finally score points as a team again.

“It’s true to my values of never giving up and I’m grateful to see that the team is helping me wherever they can in order to score my first points. Therefore I can’t wait to get in the car again in order to deliver.”

Antonio 📣”Going into the Spielberg weekend I would like to concentrate on the positives of the previous race. The pace in qualifying was great and it was good to feel the fighting spirit within the team to come back and to gain performance” #AustrianGP pic.twitter.com/HKJgG61iV3