#TheExtraLap: Lewis does not make mistakes when it matters 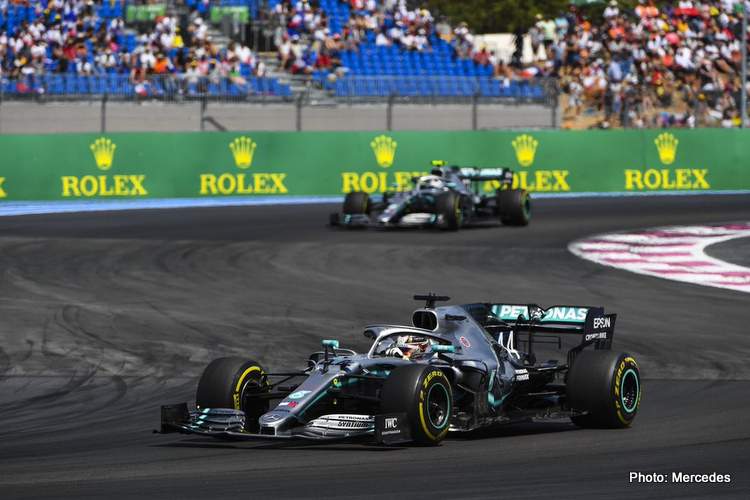 The weekend started as it ended in Canada, the Sebastian Vettel penalty grabbing headlines but when it got underway, the focus quickly shifted towards the racing.

On a rather confusing track like Paul Ricard, the usual status quo remained with Mercedes, Ferrari and the Red Bull of Max Verstappen in front but the midfield got mixed up quite nicely.

On Saturday we saw the same pattern and with the exception of George Russell and Daniil Kvyat, who had to start from the back due to penalties, the midfield race had the potential for a great Sunday.

Race day came and as expected, the Mercedes cars took off into the distance with Leclerc and Verstappen in the hunt. After a dismal qualifying for Vettel (he had to start from 7th) but by the 7th lap of the race, he managed to overtake both McLarens and ran fifth for the remainder of the race.

At the finish, Lewis Hamilton had an 18-seconds lead over Valtteri Bottas while Leclerc tried a late but failed charge on the #77 Mercedes to come home in third. Verstappen had a lonely race to fourth with Vettel fifth as mentioned.

Overall it was a pretty boring race with the final four laps giving us some excitement as Daniel Ricciardo, Lando Norris, Kimi Raikkonen and Nico Hulkenberg got into a little fight with the finish line in sight but more on that later…

Bottas showed on Friday and Saturday that he is still there or there about BUT it seems Hamilton has shifted gears and has stepped it up a notch. Hamilton makes a few minor mistakes but he makes them all on Friday and Saturday morning which means he’s on top of it all by Saturday afternoon and is flawless on the Sunday, the day the points are given.

In my opinion, if Bottas wants to get back up there, he needs to do two things: One, he needs to outqualify Hamilton but second, but most importantly, he needs to get his starts perfect so he gets to Turn 1 first. This would allow him to dictate the pace in clean air while the second car will run in the ‘dirty air’.

We are eight races into the season and while it seems easier to follow other cars, it is still a problem when you do because the tyres and cooling pay the price.

McLaren do seem to have made great progress and if it was due to the characteristics of the circuit that suited the car, I don’t know, but they had a strong and solid weekend overall.

If the reports are true and McLaren is pumping in a lot of money to upgrade their wind-tunnel, fourth is possible in the world championship. If Pierre Gasly doesn’t progress, beating Red Bull to third might even be an option. No matter how you look at it, since Baku, they seem to have turned a corner.

First, Haas seems to be going backwards fast. No idea if they have brought updates for a while but something is happening inside that team that prevents them to go forward. With a 17th and a DNF, they can’t be happy.

The second one is Racing Point. Again, Sergio Perez was the better one with Lance Stroll trying a different strategy at Paul Ricard but that didn’t work either with Perez finishing in 12th and Stroll in 13th. They didn’t take anything away from the #FrenchGP.

Difficult afternoon on track for the team 🇫🇷

People may be surprised by the fact that Gasly still isn’t making enough progress to close the gap to Verstappen but my personal surprise of the weekend, which got little airtime, was the Williams boys fighting each other AND a few other cars.

Surprise, surprise, Robert Kubica finished in front of George Russell for the first time this season. Although they are still far off the midfield pace, I really hope they can start moving forward and fight for P16/P17 at some point soon.

“We continued today in the way we have all season, maximising the package available to us.”

Check out our report from the #FrenchGP 🇫🇷

A tough one. If you take the rulebook, the penalty for going off track and gaining a position was justified. The other penalty of rejoining the track and forcing another car off track is a questionable one but if the rules state it is a penalty. Who am I to judge?

Together with a large number of fans, I’m also of the opinion that the characteristics of Paul Ricard, that of being a large parking lot made of asphalt with a track outlined just by white lines, give the drivers the opportunity to go off track without any consequences and that is exactly what happened.

That in combination with the ever-thickening rulebook, it means drivers are bound more and more by rules, so whatever they do on track, whether it is a bit of contact, going off and almost getting an advantage or any other situation where drivers start complaining about is a penalty of some sort.

In this situation, stewards had no other choice but to give Ricciardo not one but two five-second time penalties. It is what it is. I say, bring back grass and gravel and Ricciardo wouldn’t even try the move and make the rules a bit more simple.

When you’re going off track on purpose, with the intention of gaining an advantage or position, THAT is a penalty. In this situation, if the team told Ricciardo to give back the position or if race control had switched their names back after the finish, all would have been fine.

Two post-race penalties dropped him from 7th to 11th – but no regrets for Daniel Ricciardo#FrenchGP 🇫🇷 pic.twitter.com/baW4yjPUNp

Last year, Gasly did great at Toro Rosso so when he got the seat at Red Bull because Ricciardo moved on. I thought it was an obvious choice seeing as he had a year’s worth of experience with Honda, he could be a great addition to the team and probably could hang on to Verstappen who knew the car and team better than Pierre so the combination seemed to have potential.

We are now eight races into the season and Pierre is still 0.5s to 0.8s. behind Verstappen in quali and in the race, Gasly isn’t feisty enough and is going back more often than forward, while he’s in a top six finishing car, instead, he has brought it home 11th, 8th, 6th, DNF, 6th, 5th, 8th and 10th.

In comparison, Verstappen has bagged 3rd, 4th, 4th, 4th, 3rd, 4th, 5th and 4th and is a useful 63 points ahead of Gasly in the WDC standings. A team like Red Bull need two drivers to get the maximum points to challenge Ferrari this year.

Disappointed for everyone who came out to support us this weekend. Fought as hard as I could but something didn’t work out after FP3 for us and made the rest of the weekend very difficult. Time to analyze, understand, and put everything back together for our home race in Austria. pic.twitter.com/W2xUs7Dblx

Dutch Ziggo Sport reporter Jack Plooij mentioned Esteban Ocon might replace Hulkenberg at Renault and with the pool of drivers at Red Bull being thin, chances are that Daniil Kvyat might get another shot in Gasly’s seat while, according to Dutch pundits Robert Doornbos and Ho Pin-Tung, Hulkenberg could be on the move to Toro Rosso.

Same as the race, social media was boring and people started to tweet about other categories instead of keeping focus on the F1 race. Vettel’s penalty made a few appearances and after the race, social media lit up after it became official that Ricciardo received a penalty and the provisional results of the race had to be changed before they were finalised.

Next up it’s the #AustrianGP and, instead of having to wait two weeks, these are back-to-back races and, hopefully, Red Bull Ring will deliver a more exciting spectacle on Sunday, so we have more to talk about in the next #TheXtraLap!