Hamilton: There’s never a moment you shouldn’t be pushing 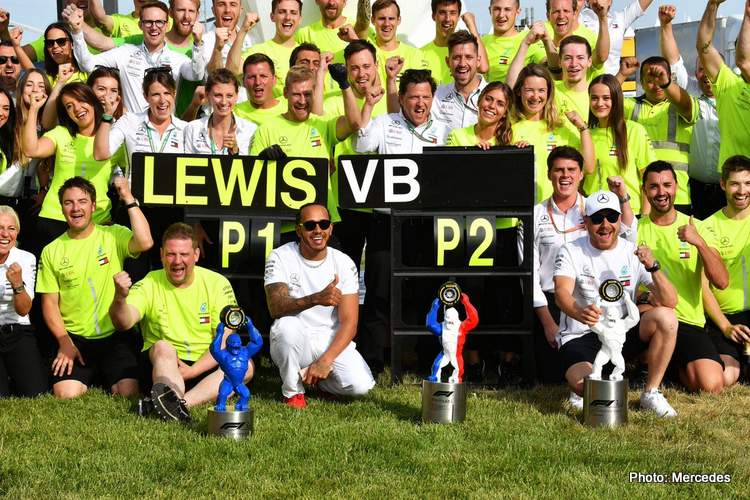 Although Lewis Hamilton was jubilant in the wake of his dominant victory at the French Grand Prix on Sunday, but he did fling a warning to his team that they must not allow complacency to set in despite their record-breaking and historic winning streak.

Eight wins out of eight for Mercedes is what the stats show, with their star upping his game to claim six of those wins and with it take a handsome lead in the drivers’ standings.

But after the heat of the race, Hamiton revealed how he was irked by his team’s lack of enthusiasm to go for the point on offer for the fastest lap after Ferrari pitted Sebastian Vettel for fresh Pirelli tyres, solely for that purpose and the German duly delivered, but only just.

It was very close as Hamilton – defying the call from his pitwall to give it a miss – also got on the gas for his final lap, with old tyres, he was remarkably only two-hundredths of a second shy of Vettel’s effort with far fresher rubber.

Afterwards, his team’s apparent apathy prompted the five-time F1 World Champion to point out to reporters, “The moment you sit back is the moment you lose. I don’t plan on doing that.”

“They were like: don’t bother with the fastest lap, you can’t get the fastest lap. What do you mean? We have nothing to lose and I’m going for it. And I went for it and I nearly got it.”

“It’s just switching the mentality to always be fighting, always be hungry and always be pushing. There’s never a moment you shouldn’t be pushing.”

Most are already declaring the season done as Mercedes relentlessly improve their stellar package while around them everyone is playing catch up.

Hamilton continued, “My team is quite calm so you get a sense sometimes it’s what they expect and they’re like: of course, pole position, that’s what we expect…”

“So they are internally happy, but it’s a little bit of an odd one. It’s just always wanting to elevate. After every race we have something that we could do better.”

While the Briton is walking away with this season, which by his own admission is boring, he also laments the fact that rival teams cannot provide the firepower for drivers to at least make him work for his inevitable sixth F1 world title.

“I really do hope we have more close races. I really hope Ferrari bring some extra downforce rather than keeping the straights fast. Get some speed through the corners so we can start racing each other,” added Hamilton who leads the championship by 36 points from Valtteri Bottas and 76 up on Ferrari’s Sebastian Vettel

Big Question: Can Lewis and Mercedes be stopped this year?