Vettel: Our aim was to close the gap and we failed 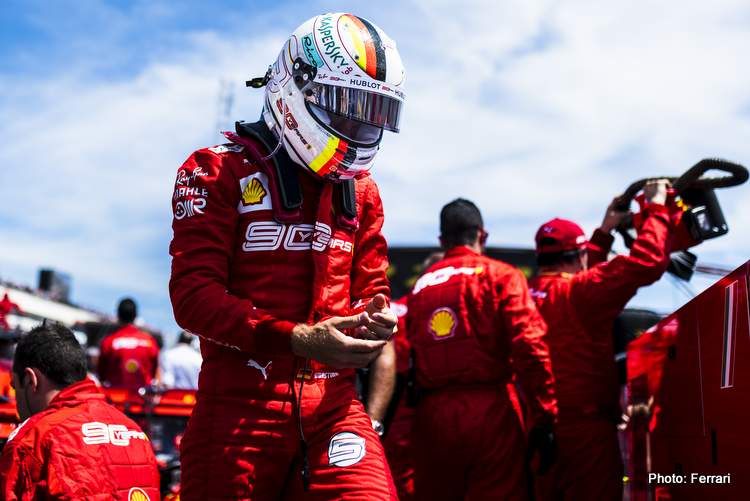 Sebastian Vettel has labelled the French Grand Prix weekend as a failure for Ferrari as Mercedes, led by Lewis Hamilton, once again romped to an unchallenged victory to make it eight out of eight so far this season.

Problems started for Vettel a day earlier after he botched qualifying and had to start from seventh. After surviving a relatively sedate first lap of Circuit Paul Ricard on Sunday, he got past the McLaren duo early on and toiled his way to fifth.

But it was clear that the SF90 lacked at least four tenths to their rivals which the German inadvertently (or not) pointed to the failed updates his team brought to France, “This weekend, the biggest aim was to close the gap as much as possible and we failed.”

“We have to understand why some of the bits we brought didn’t work and hopefully we can try again and the track layout in Austria next week will go our way.

“The track here is very hot, and the more grip you have the more you can look after your tyres and that seems to be favouring Mercedes more than us.”

Notably, Vettel pitted late in the race for fresh tyres and a shot at the one point for the fastest lap which he got but Hamilton also had a go on his well-worn rubber and was only two-hundredths of a second shy of the Ferrari driver’s best effort.

“Fastest lap was straight forward – it’s not the first time we’ve seen it. It was quite tight at the end, we seemed to have a problem with charging the battery in the last lap, otherwise it should’ve been a straight forward race.

“We know it’s straight forward in terms of speed – we are fast on the straights and not so much in the corners,” added Vettel after crossing the finish line a minute down on Hamilton.

On the day, the Briton banked maximum points for his efforts and now leads his rival in red by a daunting 76 points after eight rounds, having won six of them, while Vettel is going through a barren spell that has resulted in him not winning a race since Belgium almost ten months ago.

Big Question: Will Seb win a race this season?