Toro Rosso: Not the race we were hoping for 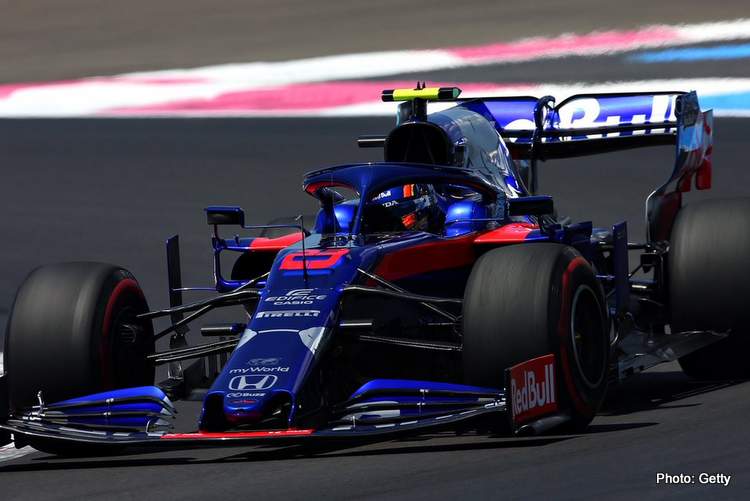 Toro Rosso report from the French Grand Prix, Round 8 of the 2019 Formula 1 World Championship, at the Circuit Paul Ricard in Le Castellet.

“I think the race wasn’t too bad today. In the end, we did the best job possible and we had some good battles on track, I made a nice move on the outside of Grosjean and had an enjoyable battle with Alex towards the end of the race – it was quite fun! I’m not sure where we would have finished if we had of started further up the grid without the penalty, but I think it would have been a bit of a challenge to finish inside the points today. Now we need to analyse everything in order to come back stronger in Austria.”

“Unfortunately, our race was compromised from lap one as I went wide into Turn 2 and got boxed out. I didn’t realise how much grip there was on the outside and I lost a few positions. We were quicker than the cars in front but struggled to get past them as everyone was in the DRS train, so I spent most of the race behind another car.

“We lacked a bit of pace today, so we need to understand why and where we can improve. It was good fun battling with Dany, however, fighting for positions outside of the points is not where either of us wants to be.”

Guillaume Dezoteux, Head of Vehicle Performance: “This is not the race we were hoping for here in Paul Ricard. We were immediately on the back foot after the first lap when Alex lost several positions and Daniil got overtaken by Russell. Daniil was able to recover some ground during his first stint and he successfully challenged Alex towards the end of the race for P14, which offered a good show. All in all, he had a solid race and managed his tyres well.

“Alex went wide in Turn 2 after the start and lost five positions. After having spent 14 laps in traffic, he was able to overtake Magnussen and recover some of the time lost to the train of cars he started with.

“Unfortunately, it was only enough to clear Giovinazzi after the pit stop. A mistake in Turn 7 meant he lost a place and had to fight again to get his position back. We were then too far away from the cars ahead and the blue flags compromised the last part of his race.

“We only managed to finish P14 and P15 today, which is disappointing after a decent Qualifying and the reasonable pace we had on Friday. We will analyse all of the data and prepare for the next race as best as possible to hopefully get a better result in Austria.”