Honda: There is still room for improvement 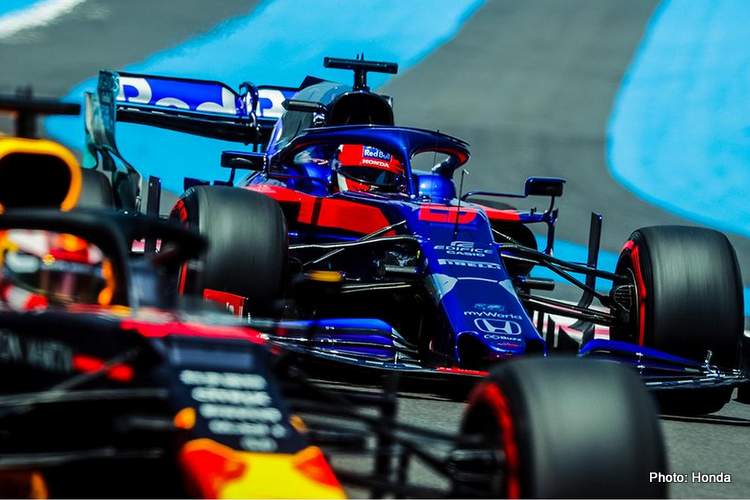 On a hot day at Paul Ricard, Max showed great skill at the start to resist pressure from behind and then attack Charles Leclerc for third place. Settling into fourth, Max made his only pit stop on lap 20 but was too far adrift to undercut the Ferrari at that stage.

With Sebastian Vettel behind, Max then managed his pace perfectly to ensure the second Ferrari did not become a major threat and crossed the line fourth to bring his points tally for the season up to 100.

Pierre was always facing a tall order having to start from ninth place on the soft tyre given the conditions, but an impressive first stint allowed him to pit on lap 17 to switch to the hard compound and run to the end of the race. Unfortunately, cars that didn’t reach Q3 had a free choice of tyre and opted for the hards, gaining track position and relegating Pierre to 11th place.

Toro Rosso had a challenging afternoon after Alex lost a number of places on the opening lap and dropped from 11th to 16th, with tyre management making it tough to fight back through the field.

Alex produced a number of good overtakes before pitting for hard tyres on lap 25, while Daniil ran the opposite strategy and started on hards before switching to mediums with 21 laps remaining.

Daniil made good progress after he started at the back of the grid, and passed Alex with five laps to go with a clean move at the chicane to finish 14th, one place ahead of his team-mate.

We will now analyse all the data gained from the updated power unit ahead of Red Bull’s home race next weekend in Austria.

Toyoharu Tanabe, Technical Director: “This was a tough race for us, but as usual, Max drove a strong race to finish where he started, with the three cars ahead of him also finishing in grid order. Although all our cars took the chequered flag, our other three drivers had a more difficult afternoon.

“Our new Spec 3 PU performed as expected, but there is still room for improvement, and we will continue to work on that immediately to try for a better overall result next weekend in Austria.”

“This was a tough race for us, but as usual, Max drove a strong race to finish where he started, with the three cars ahead of him also finishing in grid order.”