Haas: The worst race weekend since we started the team 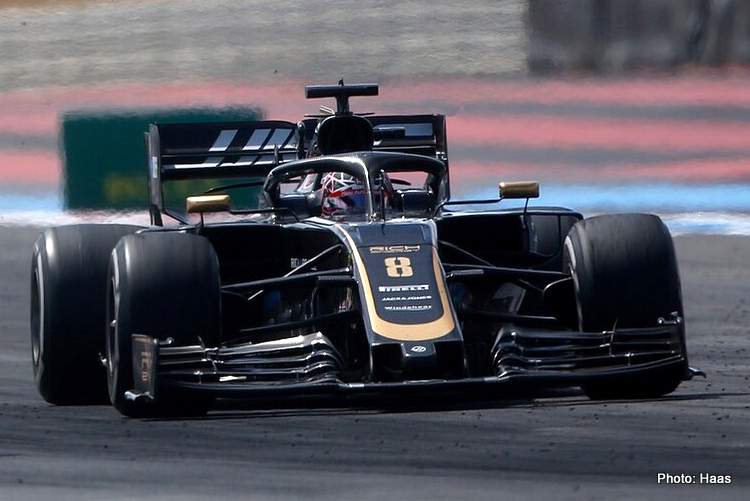 Magnussen started 15th on a set of Pirelli P Zero Yellow medium tires and picked up two positions over the first 10 laps of his initial run before dropping back to 16th. He pitted for a set of White hard tires on lap 16 and resumed at the back of the field. He was able to advance three positions before the checkered flag.

Grosjean began the race on hard tires from his 16th grid position, dropped two spots on the opening lap to 18th, but then worked his way up to 13th on lap 20 before pitting on lap 32 for a set of Yellow mediums. He resumed just in front of Magnussen in 17th, gaining one position before his Haas VF-19 was retired on its 45th lap, two down on the race leaders.

Rich Energy Haas F1 Team leaves France having dropped one position from eighth to ninth in the constructor’s championship with 16 points, one behind eighth-place Toro Rosso and 16 ahead of 10th-place Williams.

Mercedes driver Lewis Hamilton scored today’s victory from the pole for his 79th career win, his sixth of the season and his second career and second in a row from the pole at Paul Ricard. His teammate Valtteri Bottas finished 18.056 seconds back in the runner-up position, giving Mercedes its fifth 1-2 finish of the season and 50th all-time. Scuderia Ferrari driver Charles Leclerc took the final podium position.

The 2019 FIA Formula One World Championship resumes with next weekend’s Austrian Grand Prix June 30 at the Red Bull Ring in Spielberg.

Romain Grosjean: “I got the maximum from the car, but it was just not good enough. Even though the balance felt okay, we were just very slow. We need to go back and analyze everything, try and understand it. We’re just really struggling. It’s hard to retire in front of your home crowd, but we’ve saved some parts. We were far from the points anyway. I think it was the right decision.”

Kevin Magnussen: “There’s not much to tell. I think after Friday we were thinking that qualifying might be difficult, but the race would be strong. Unfortunately that wasn’t the case. We were fighting at the back the whole race. We were a bit helpless. Obviously our pace is the biggest challenge at the moment. We just lack pace sometimes, and today was one of those days.”

Guenther Steiner, Haas: “Unfortunately this race weekend was the worst since we started the team. We need to try to find a way out of our issues. This is not where we want to be.”

Difficult afternoon on track for the team 🇫🇷