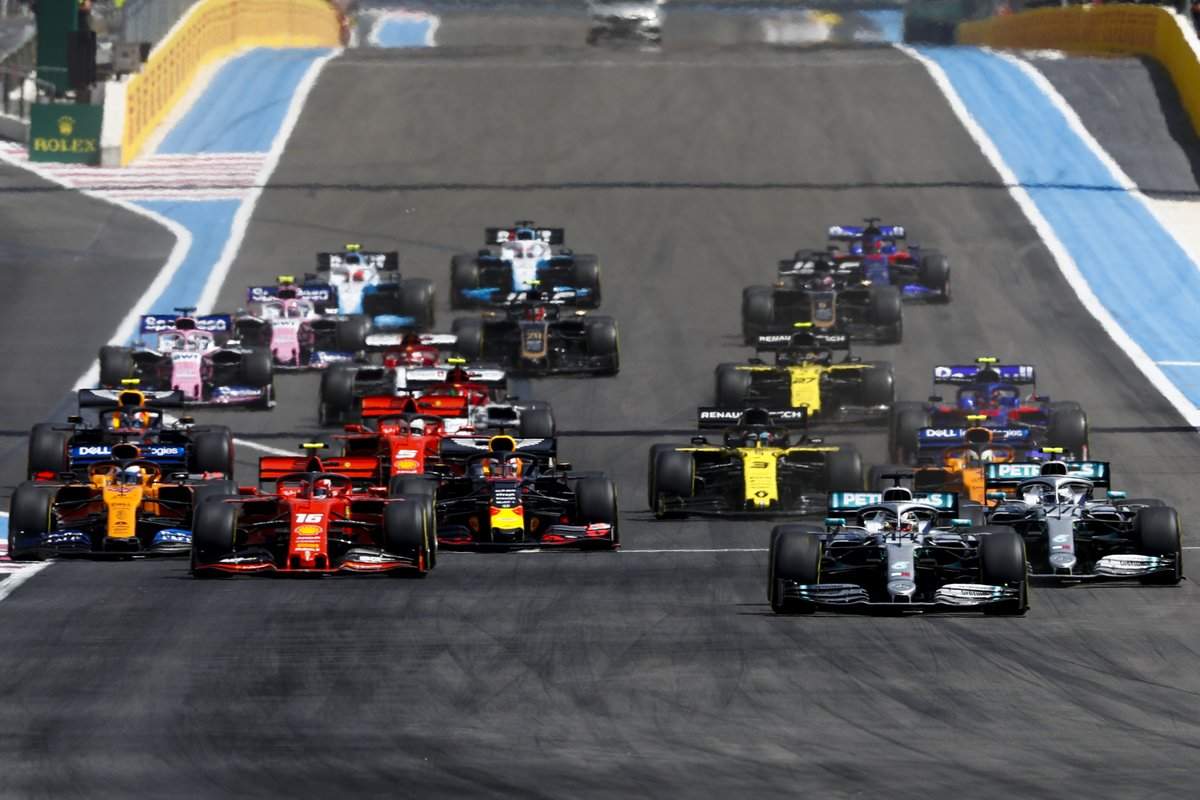 Mercedes driver Lewis Hamilton powered to a dominant but tedious (polite way of saying an ultra-boring race) French Grand Prix, Round 8 of the 2019 Formula 1 World Championship, at a hot and sunny Circuit Paul Ricard in Le Castellet. 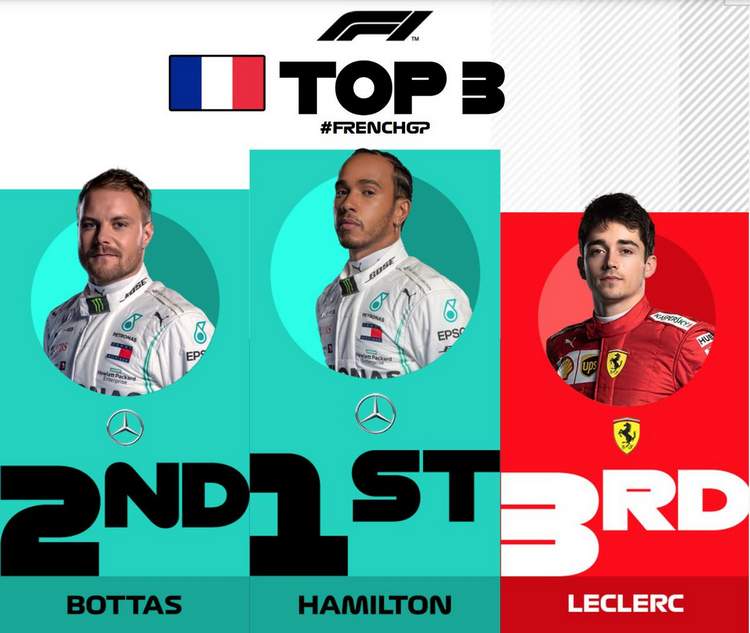 While he did sound flustered over the radio once or twice during the 53 lap race, Hamilton cruised away from the start, the Briton was faultless off the line when red lights went dark before you could blink, launching the field perilously into Turn 1 but everyone was well behaved for a change and we had no first lap carbon shards.

Once in the lead, the five-time F1 World Champion was simply in a class of his own as he built a lead at about half a second a lap leaving his teammate and the rest in his wake.

“A masterclass!” as Martin Brundle declared before interviewing the World Champion in parc ferme post-race.

Hamilton recapped his afternoon, “It has been a really good weekend – I have been racing a long time and it never gets old and it is such a challenge out there, and finding the edge and building the gap.”

“We are creating history together and so proud to be part of this team. I am hot. It is a beautiful day and the track is awesome and there is some technical areas.”

“It wasn’t easy at all and everything is on the edge. I had quite big blisters on the front two tyres – but this has been the best start of the year.”

On the other hand, Bottas was a tad tardier onto the loud pedal but still managed to tuck under the wing of his teammate as the pair tore away from the field.

On the last lap, the Finn came under threat from the Ferrari, it was close but no cigar.

He said afterwards, “I had a good start, but Lewis had a good start as well. Ultimately Lewis was quicker today I couldn’t match his pace so that is something for me to look at before the next one.”

“But I’m proud of the team and it’s important to understand the pace today for next time. He was really strong and consistent today and yesterday in qualifying, but he’s not unbeatable.”

It was a 50th Mercedes one-two and Hamilton’s 79th victory grand prix victory, as he again extended his championship points lead to 36 points over Bottas and 76 up on Vettel.

Max Verstappen nearly managed to get his Red Bull ahead of Charles Leclerc on the first lap, but the Ferrari kept the position and held it to the end of the race, pretty much unhindered followed by Verstappen on a day in which the top four finished as they started.

Leclerc told reporters afterwards, “I gave it everything, I felt OK with the car but the Mercedes were too quick early on. The first run was quite OK, and on the second run I was about tyre management and towards the end I was catching Valtteri.

“But there was not enough laps for me to try something. But where we were on Friday, today is a great day for us. In the last two laps I was catching quite quickly.”

As expected Vettel got by the McLaren to chase Verstappen but the red car never got close enough to mount a serious attack, the German was fifth from seventh on the grid.

He bolted on fresh tyres to nab the fastest lap, notably his time was only a couple of hundredths faster on the new rubber than Hamilton’s late-race effort on the much older soft Pirelli tyres.

Vettel summed up his day at the office, “Fastest lap was straight forward – it’s not the first time we’ve seen it. It was quite tight at the end, we seemed to have a problem with charging the battery in the last lap, otherwise it should’ve been a straight forward race.

“We know it’s straight forward in terms of speed – we are fast on the straights and not so much in the corners. This weekend, the biggest aim was to close the gap as much as possible and we failed. We have to understand why some of the bits we brought didn’t work.”

“Hopefully we can try again and the track layout in Austria next week will go our way. The track here is very hot, and the more grip you have the more you can look after your tyres and that seems to be favouring Mercedes more than us.”

Next up and Best of the Rest was Carlos Sainz in sixth, who edged ahead of his teammate Lando Norris on the opening lap and stayed there until the end.

The McLaren teenager tripped up on the last lap when Ricciardo stumbled past the orange car around the outside of the chicane but went off the track before going on to cross the line seventh, with Raikkonen and Hulkenberg also jostling for advantage.

But the FIA race stewards investigated the incident after the race and gave the Aussie a ten-second penalty for his transgressions which dropped him to 11 the and out of the points and instead promoting Raikkonen to seventh followed by Hulkenberg.

Norris dropped from sixth to ninth with Pierre Gasly, again well trounced by his teammate, earning the final point. As a consolation, the youngster was voted Driver of the Day for his impressive efforts.

Polesitter Hamilton made a good start to take P1 ahead of Bottas, Leclerc and Verstappen. Further back, Sainz got away well to pass teammate Norris, but despite pulling alongside Verstappen early in the opening lap the Spaniard couldn’t steal the position.

Foot to the floor 🚀

Over the first 10 laps Hamilton built a 2.6s gap back to Bottas, who in turn eked out a 3.8s advantage over Leclerc. Behind them, Sebastian Vettel was the man on the move in the early stages, with the German passing both McLarens to rise to fifth from his starting position of seventh to sit 7.3s behind Verstappen as the opening stint wore on.

Verstappen was the first of the front runners to make a pit stop, with the Dutchman taking on white-banded hard compound tyres at the end of lap 20.

Leclerc was next in, on the following lap, and when he rejoined, on the same compound, he was fourth, five seconds ahead of the Red Bull. Ahead, Hamilton now led Bottas by 7.5s with Vettel now third.

Bottas made his sole tyre stop on lap 23 and the Finn was followed to the pit lane by race leader Hamilton. The Briton emerged just ahead of Vettel and after locking up on the next lap the German also pitted for hard tyres, at the end of lap 25. He emerged in P5, 4.5s behind Max.

The order at the front now stabilised and over the next 15 laps Hamilton increased his lead over Bottas to 12.9 seconds, while Leclerc fell 7.2s behind the second Mercedes. Verstappen was now in a race of his own, with the Dutchman lying 6.7 seconds adrift of Leclerc and more than seven seconds clear of Vettel.

With the gaps throughout the field looking relatively fixed the race the order looked like remaining static until the chequered flag.

However, a handful of laps from the finish the grand prix came alive once more, first when Norris began to suffer hydraulic problems and then when Toro Rosso’s Alex Albon clipped a bollard that had to be recovered from the track.

The Albon incident brought out the VSC, and the spell at lower speed left Bottas struggling to get heat into his tyres. Leclerc closed him down and prepared to attack.

Behind them Norris’ was caught by his rivals and on a combative final lap he was passed by Ricciardo, Räikkönen and Hulkenberg, though Ricciardo was then placed under investigation for leaving the track and gaining an advantage.

Late drama in the battle for points, with P7 the prize on the final lap 👀 🍿

In the midst of it all, Hamilton took his 79thcareer win ahead of Bottas who denied Leclerc to claim P2 by just 0.9s. Verstappen followed to take his fifth fourth place finish of the season. Vettel finished fifth and the German also took fastest lap after a late pit stop for soft tyres. Sixth place went to Sainz, crossing the line ahead of Ricciardo, Räikkönen, Hulkenberg and Norris. 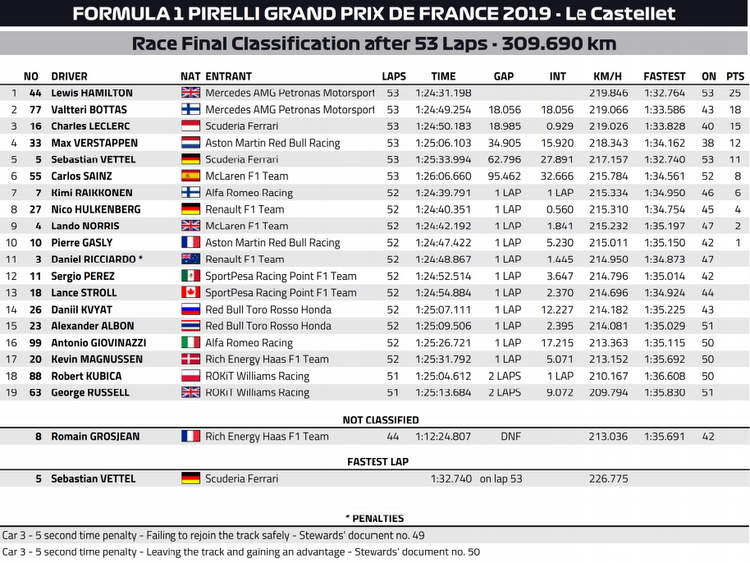 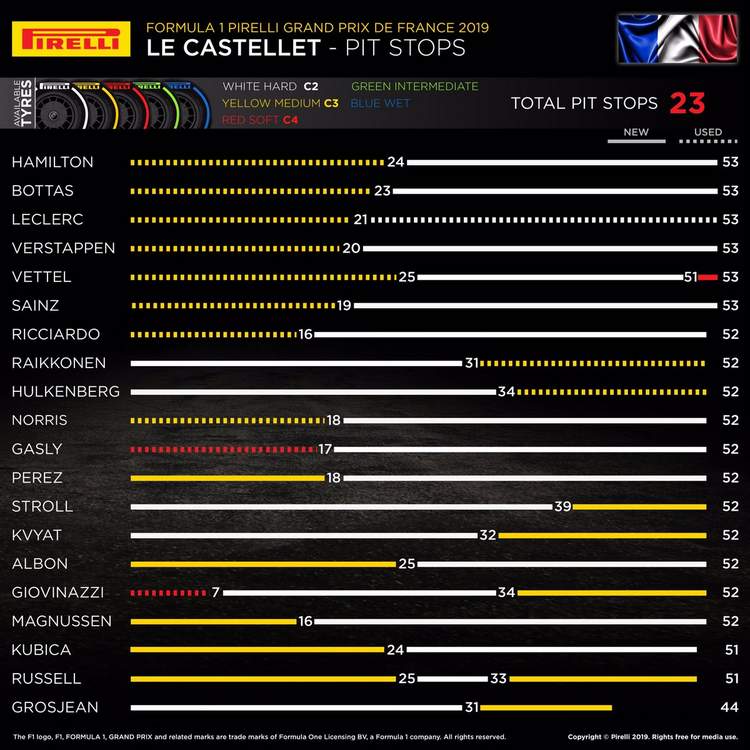 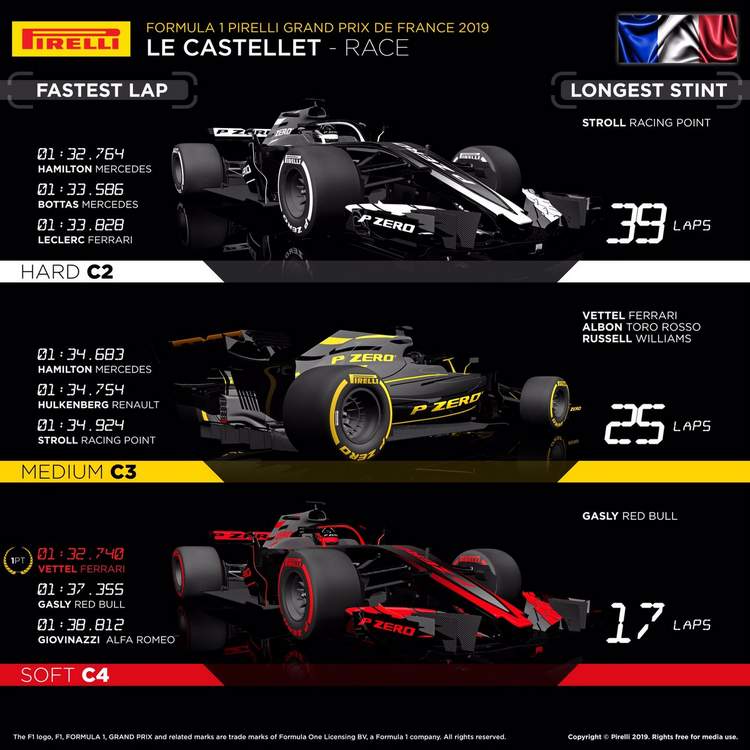 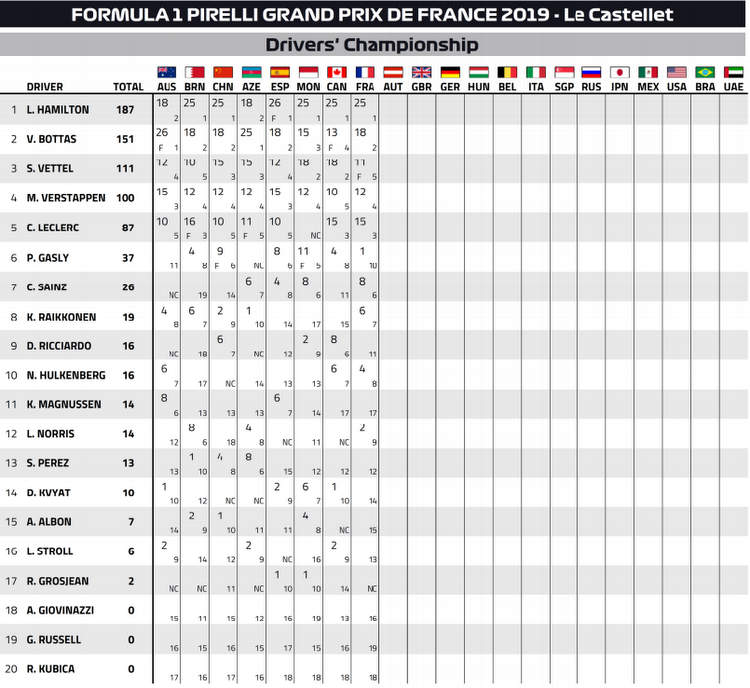 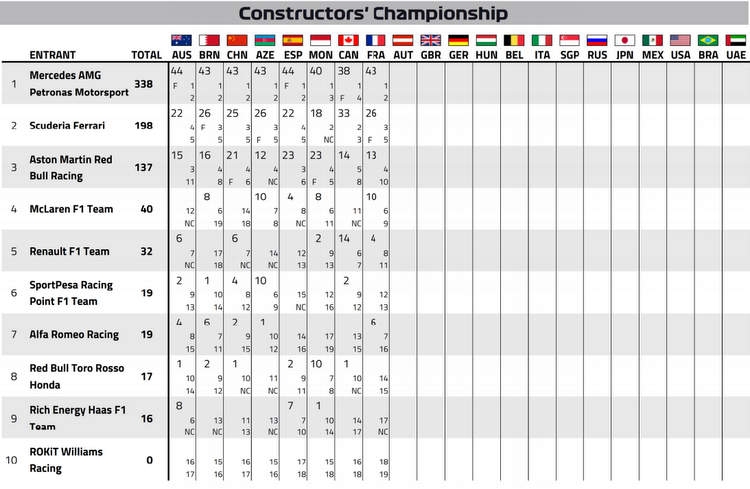