Vettel: I’m not trying to kill him, don’t worry 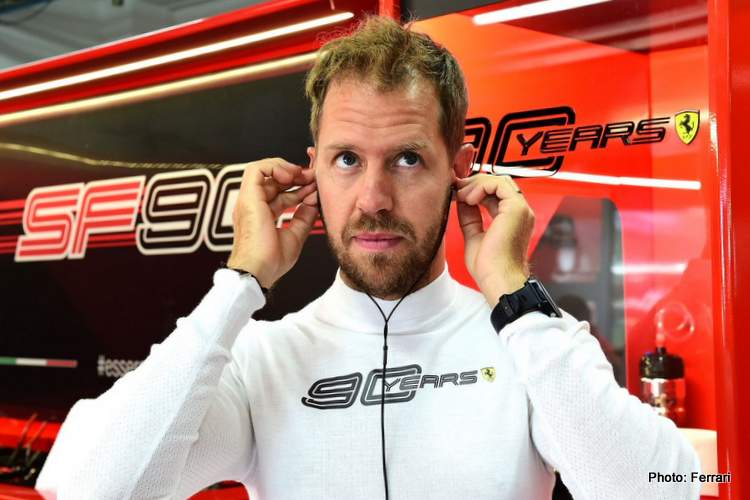 Vettel failed to find the sweetspot and fifth gear apparently, which saw him end up 1.4 seconds shy of the top time and eight tenths down on his teammate Charles Leclerc.

Clearly, all is not well with the four-time F1 World Champion who has been under-fire since the mistake he made resulted in the five-second penalty that dominated headlines after the race in Montreal.

In France, it was still haunting Ferrari and their star driver as they faced a barrage of questions relating to the matter which then went from bad to worse when FIA stewards turned down their request to review the case.

The Reds were not happy but appeared united until qualifying at Circuit Paul Ricard, when a terse Vettel gave a glimpse of the extent of the tensions within the team or at least winds of discord.

Because Vettel was holding up teammate Leclerc behind him on their final out laps in Q2, a radio call requested the German to speed  at which point he and his engineer engaged in an intriguing exchange:

It was an over-the-top response to a reasonable request from the pitwall to get a hurry up and not to hinder his teammate, suggesting some sort of needle or frustration that the Ferrari driver could not contain.

The tension was palpable, to the point that Martin Brundle made a note of it during the Sky F1 broadcast. It was an odd reaction by Vettel.

Nevertheless, in Q3 it got worse for the German as he messed up his first flying lap and immediately reported an upshift issue before aborting and later his final effort was simply not good enough.

After the session, it was a downbeat Vettel who reported to media, “I don’t know what happened, I lost so much momentum there was no point to finish that lap.”

“It was up and down some laps, it felt good and others didn’t. I didn’t get the best out of the car but it was difficult for me, but some laps I didn’t have the grip I had before. Shame it happened in Q3. Mercedes are far away but we should be in the mix with Red Bull,” added Vettel.

One could argue that the Ferrari star is wobbling under the pressure of a campaign that has gone seriously wrong. His demeanour coupled to a raft of high-profile errors has inevitably triggered retirement questions which he swatted off in the lead up to the race weekend at Paul Ricard.

Whatever the case the incident indicates that all is not well behind-the-scenes at Maranello as their star driver feels the heat, and right now it would be fair to say that the pressure is getting to Vettel.